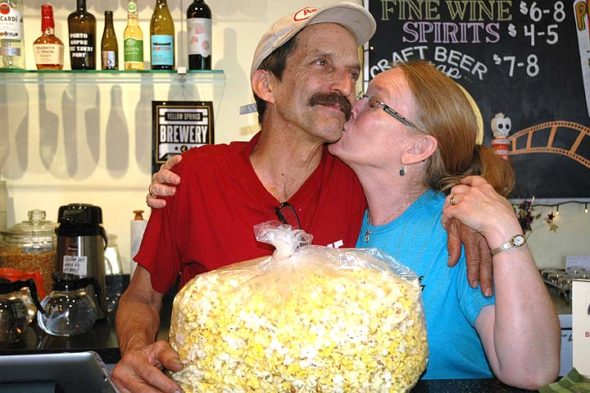 Villager Andy Holyoke, left, has retired from the Little Art Theatre after nearly 41 years working at the local cinema. A public celebration of his tenure will be Thursday, June 15, beginning at 7 p.m., at the theater. Little Art Executive Director Jenny Cowperthwaite, right, said she couldn’t let the milestone pass without honoring her longtime friend and co-worker. (Photo by Carol Simmons)

After nearly 41 years, give or take a few in the middle, Andy Holyoke, aka “Mr. Thursday” by his co-workers, has retired from the Little Art Theatre.

Holyoke, who earned the “Mr. Thursday” nickname in recognition of his long-time tenure as the theater’s designated Thursday night projectionist, has left the projectionist’s booth for good. That’s for certain. But he hasn’t left the theater completely, and he doesn’t plan to anytime soon. He will remain on call as an all-around “problem solver.” This past week, for example, he could be found installing a couple of shelves behind the theater’s concessions counter.

His regular hours on the clock, however, have ended. And the theater is hosting a public celebration for Holyoke’s years of service — he first went to work for the Little Art in the summer of 1976 — on Thursday, June 15. A reception in the lobby will begin at 7 p.m., followed by a showing of The Last Reel, a short documentary by local filmmakers Julia Reichert and Steve Bognar about the Little Art’s switch in 2013 from film to digital movie screenings, a move that brought some national attention to projectionist Holyoke at the time. The evening will end with co-workers and community members invited to share stories about Holyoke in an open mic setting.

Holyoke’s association with Thursday nights wasn’t just a matter of scheduling. As the final night of a movie’s run, certain tasks were required to prepare a celluloid film for return to its distributor, he said. Before the theater’s switch to digital, staff had to cut and splice each movie to be able to show it continuously with their two-reel projector system; and then at the end of the run, the film had to be spliced back together as it had been received. Holyoke was the lead person for that job, said Little Art Executive Director Jenny Cowperthwaite. His extensive knowledge built on long-time experience as well as a deep-rooted proclivity for problem solving made him unparalelled in handling film — and anything else — Cowperthwaite said.

“We tried to call him our ‘Andyman,’ because whenever we have a problem, we call him first,” she said recently at the theater. But he rejected that idea. “We also tried Handy Andy — he didn’t like that either.”

Nicknames aside, Holyoke said he has always liked solving problems. “My other career is in construction, and being in construction by nature is being a problem solver.” He is particularly known for building earth-friendly straw-bale houses. He said a challenge in both construction and film projection is to fix problems without observers knowing anything went wrong. In the pre-digital world, film may have been spilling out all over the floor — an occurrence Holyoke lived through at least once — but not disturbing the audience’s viewing experience was his main priority.

He said his approach to problems is two-fold: “First, do no harm, like a doctor, and second, try not to become part of the problem.” By that, he means avoid “solutions” that don’t address the basic goal – an uninterrupted film presentation that can be seen and heard.

“Everything changed with digital,” he said. Rather than large round canisters of film delivered by courier truck to the theater in the early morning hours, a rectangular metal box the size of a small toaster arrives via Fed Ex or UPS. The movie is encoded on a hard drive that gets plugged into the theater’s computerized projection system, which was installed during an extended renovation nearly four years ago. Holyoke said he couldn’t help but feel a bit obsolete with the change. “After 35 years, I was pretty good” at handling the reels of film. “Now the skill set is pretty much what do you unplug and where should you unplug it.”

In recent years, he was down to working at the theater just one night a week, as much out of loyalty and kinship as anything, and the decision to retire grew organically.

His career at the theater began similarly. “I was watching a lot of movies,” the Yellow Springs high school alum said of his early 20s. “And I needed something to do in the evenings besides going out to the bar,” he added.

In effect, his relationship with the theater began before his marriage, career in construction and the birth of his two children, sons Tristan and Alban.

He remembers when each of the boys were babies “having a little cardboard box up in the projection booth” where they slept through the screenings. Eventually, “each of my kids did some time being a projectionist here.”

He was busiest with the theater during the 1980s, he said. “At one point, I was working five nights a week, so it was like a real job.”

A love of movies got him into the theater, but the projectionist’s booth wasn’t the place to fully enjoy a film, he said. There were too many things to think about and monitor, such as sound quality and picture focus. “You’re looking through a little window, listening with headphones.” He said he used a pair of binoculars to see the screen in the way someone sitting in the front row might see it. To focus, he said he would turn the lens to the left until it was fuzzy, and then to the right until it was fuzzy, and then try to find the sweet spot in the middle. Digital films don’t need focusing, however, and with the current set up, “you can’t actually see the screen” from the projector’s booth.

A classic screening disaster of the past was for a film to catch on fire from the heat of a projector bulb, but Holyoke doesn’t remember that ever happening under his watch. “I believe I never burned a film,” he said. “I had a film break. I had a film spill all over the floor.” His heart has raced a few times, too, when particular movies included images of burning film, and he had to determine what was real.

“My pet peeve is movies that start out so quietly that you can’t tell if the sound system is working or not, or they start with a blank screen. There should be a law that movies must start with sound and light.”

While the process for showing movies has changed over the years, Holyoke said the experience of watching movies seems much the same. The thing that has struck him the most over time, he said, “is how people have different reactions to the same movie.” There’s little uniformity of response.

He also notes that there is more competition. “When I first started working here, we were just competing with network TV. Then came beta and VHS. Then DVDs.” Now there are streaming services to watch movies on a range of personal electronic devices.

When Holyoke started, concessions consisted of “a tea pot and a coffee pot, and an honor system for paying for them. Then we added butter bars.”

There was popcorn upstairs that Holyoke made for himself and other staff with a personal popper. The theater’s executive director Cowperthwaite, who also started working at the theater in the 1970s, said patrons would comment on smelling popcorn and be confused that there was none for sale.

Holyoke is still known for his popcorn consumption, and will take home old popcorn rather than see it thrown away. “The concessionaire is supposed to never run out,” so invariably there will be some left over at the end of a movie, he said. “I’ve said I’ll take it. I’m a first-class consumer of popcorn.”

While Cowperthwaite appreciated Holyoke’s many on-the-job abilities, she also valued his personal guidance in working with staff. “I’m particular about things,” she said, noting that when she first became manager, she “started sort of tightening things up,” and she shared her thoughts through “a lot of notes to staff.” She doesn’t remember Holyoke’s exact words, but she said he let her know in a straight forward, yet kind way, that her tone wasn’t going over well. “He helped me transition from being bossy to being more respectful,” she said.

“Andy’s always been such a kind and generous, funny, very good-natured, good-hearted person.”

She compared him to an EMT in the way she could always count on him to drop everything and come to the theater whenever a problem arose. “He’s so creative,” too, she added, describing how he solved various issues.

“I have hundreds of memories,” she said. One, from more than 10 years ago, was “after a huge snowfall. … Andy knew the weight of the snow was too much for the marquee. There’s a picture of him and one of his sons up there shoveling that snow off.”

Cowperthwaite, who counts herself as more sentimental than Holyoke, has made a list over the years of all the people who worked at the theater. In thinking about her friend and co-worker’s retirement, she said she realized that all of the former employees — hundreds and hundreds of people — have worked with Holyoke.

“They all know Andy. They all love Andy,” she said. “Everybody loves Andy.”