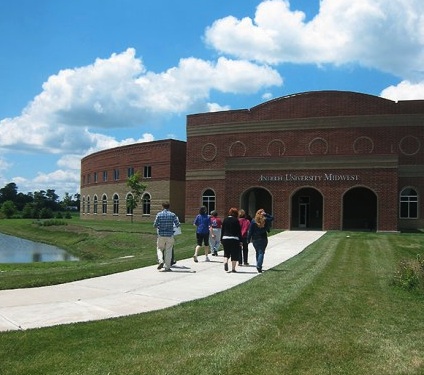 Antioch University announced this week that it plans to sell the AUM building on the western edge of Yellow Springs and relocate to Dayton. The property could be put on the market as early as mid-July.

Antioch University plans to sell its Yellow Springs campus and relocate to Dayton, according to a letter from Interim Chancellor William Groves this week.

The university will be hiring a national real estate firm to find potential buyers for the 94,000 square-foot building, located at the western edge of Yellow Springs adjacent to the Village-owned CBE land. The property could go on the market as early as mid-July, according to Groves in a phone interview with the News on Wednesday. While educational providers could be potential buyers, there are no restrictions on whom the university can sell the building to, Groves said.

Both the Yellow Springs school district and the Greene County Career Center contacted the university with interest in the building last summer, when the university first announced it might be selling the campus. No further discussions have been pursued to-date, however.

The university is selling the Antioch University Midwest building for a variety of reasons, Groves said on Wednesday. Many of its students reside in the Dayton area, and enrollment growth is expected to come from that region. In addition, the university has shifted to hybrid and online courses and low-residency programs, reducing the need for physical space. And the AUM campus has seen enrollment declines from a high of about 700 in the early 2000s to about 500 today.

The building was constructed in 2006 for $13.5 million. The university has not yet set a sale price.

Read a more detailed report in the June 1 issue of the News.