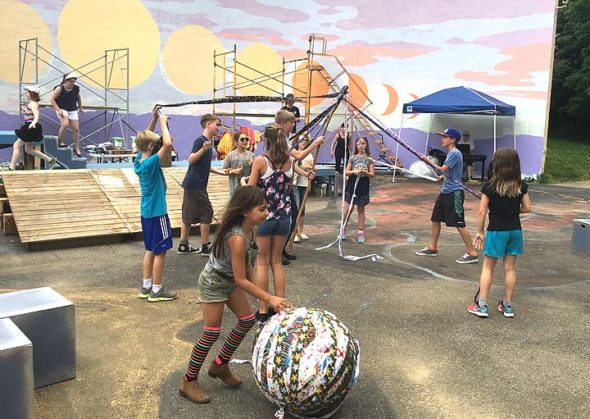 “Luminous Luna,” an original musical by villager Luke Dennis with music by James Johnston, will be presented by YS Kids Playhouse this weekend and next, with performances Thursday through Sunday, June 22–25, and June 29–July 2 at 7:30 p.m. (Submitted Photo)

On a recent Saturday afternoon, the 35-member cast of “Luminous Luna,” YS Kids Playhouse’s 23rd original musical, sat on the floor in a circle inside the Foundry Theater. It had been a long morning outside in the sun at the amphitheater and the rehearsal was wrapping up with YSKP Managing Artistic Director Ara Beal leading a discussion by asking each cast member to express out loud what they had “figured out they need to work on,” being very clear with each young person on their choice of words. Beal made clear the emphasis was not just on improvement, but that it was critical that each performer understood what their part in the whole was and how they fit in to the overall production.

It is perhaps no surprise that a company that has a long history of empowering young performers, writers and theater technicians, encourages its cast members to reflect on their work and take responsibility for it as the production moves from rehearsal to performance. When it was his turn to speak, a very young performer said, “I need to figure out where I’m always supposed to be on the stage — upstage or downstage.”

The company is set to kick off the world premiere of “Luminous Luna: Myth and Imagination” at the Antioch Amphitheater on June 22. Written by local playwright Luke Dennis with music by James Johnston, the play explores humanity’s fascination with the moon through the retelling of myth and scientific discovery.

The play is structured around the telling of five myths from across the globe featuring Aztec, Chinese, Australian, Iroquois, and Nordic traditions. Co-directed by Beal and Melissa Heston, who also serves as choreographer, actors portray “Luna narrators” who help set up the stories and, according to Beal, “are the connective tissue that tie the five myths together and explore the idea of how connected as humans we are though storytelling and how that bonds us as a group and brings us together.”

The play is further woven together with facts about the moon presented by actors portraying the characters of astronauts and scientists, which is then augmented by other actors playing TV journalists delivering “Fake News.” Ben McKee, a veteran of past YSKP productions, plays Special Agent Mythty and relishes the challenges his role presents.

“I like the part where I’m denying the moon landing happened because I think that’s pretty funny,” he said. “But the most challenging thing is trying to play a villain who acts evil but really thinks they’re good.”

According to Beal, “most of the performers are cast as a featured character in one myth, like a god, but then appear in other myths as a narrator. The idea is to really look at how we work together to tell stories, whether we are on stage, or sitting around a campfire, or a lunchroom.”

Maggie Wright, who plays a cat, a Luna narrator, and John Glenn, explained that her role is to help present the myths to the audience. Kira Hendrickson, also a veteran of other YSKP shows, plays Luna. She discussed the challenges of the role after the rehearsal ended, “The hardest for me is deciding how to react to what’s happening on stage and to decide how to put that into my body and how my opinion changes during the show.”

After the kids had been dismissed for the day, Beal and Heston reflected on how often it seems that YSKP productions ended up being so topical and connected to current events. Beal remarked that last year they did a play about a woman trying to get to the White House, which she promised was nothing more than a happy coincidence with election year.

“We do have the ability to tweak things to help reflect what is going on in the world today,” Heston said, as was evidenced by the creation of the character of Agent Mythty which mirrors recent debates in TV journalism over “Fake News.”

Luke Dennis is more commonly known to the village as the development director for WYSO. Dennis, however, has a background in theater, as a playwright, director and arts educator with the Victoria Theatre Association in Dayton and Harvard University Theatre Collection, where he served as curator. He has written and directed more than a dozen plays that toured to middle and high schools for Dayton Opera, Muse Machine and the Human Race Theatre Company.

Dennis said that his approach to writing the play “was informed by the spontaneity, speed, and style of long form improvisation.” He wrote the play to deliberately make use of the fluid outdoor space the Antioch Amphitheater offers, where costumes and sets can be minimal, and the actors “fill the space with their bodies and voices to create entire universes in each scene.” Actors remain visible onstage when not directly in the scene, encouraging the audience to see the play “through the eyes of a child.”

James Johnston’s music draws on many different genres including soul (with a number inspired by James Brown), opera, Broadway, a Mozart recititave, and homages to the cirque music tradition. With a score of 15 songs, there is sure to be something for everyone.

According to Beal, another unique aspect of the production is that because the myths span the world and involve approximately 40–50 different characters telling the stories, they have used costumes from previous productions. It is also a great use of limited resources and enables the company to give life to old costumes or props they might not have been able to use again.
“We have props we’re using that go back to ’96 or ’97 — we’re putting stuff on stage now that is older than these kids,” she said.

The dates for the show are June 22–25, June 29–30, and July 1–2, with curtain up at 7:30 p.m. All performances will be at the Antioch Amphitheater, unless it rains, and the show will move inside to the Foundry Theater. June 30 is the annual Arts for All performance and families with individuals on the autism spectrum are invited to the show. Inspired by the Autism Theatre Initiative in New York, this performance is geared for those on the spectrum who may have a hard time sitting through a more traditional theater experience. There will be calming centers for audience members who need a break and fidget toys available for busy hands.

“We remove startling sounds, add a narrator and make other adjustments to what happens on the stage,” Beal said. “We also have special educators on hand to assist.” Tickets for this special performance are $5 for all adults, students and seniors. Saturday, July 1, is Alumni Night, where alumni are admitted free and invited to take a bow on stage at the end with the cast.
Tickets at the door are $12 for adults and $8 for seniors and students. Tickets are also available online until June 21 at a cheaper rate: $9.50 for adults and $5 for seniors and students and are good for any night of the run. Running time for the show is approximately ninety minutes. Visit http://www.yskp.org/tickets to purchase tickets.

*Holly Hudson is a freelance writer for the News.