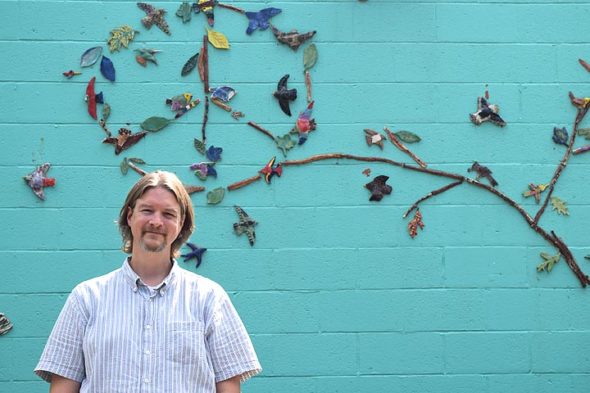 Nathan Summers took over as the new school manager of the Antioch School, a small, private school in the village, after former manager M.J. Richlen left last year. Summers previously was board chair at the school and vice president of student affairs at the School of Advertising Art in Kettering. (Photo by Jessica Sees)

Nathan Summers, a Yellow Springs resident of 20 years, has been handed the unicycle as the new school manager at the Antioch School.

He and his wife, Rachel, who owns Into the Blue Yoga studio in Springfield, live in the village with their two children, Jonah, 11, and Violet, 9, who both attend the Antioch School.

Summers’ connection to the school doesn’t stop with his children. He served as a board member at the Antioch School for four years — several of them as board chair — previous to his new role as school manager.

Before serving the school as the manager, Summers was employed at the School of Advertising Art, or SAA, in Kettering, Ohio, for 17 years. There, he held multiple positions, with the most recent being his role as vice president of student affairs.  He also served as director of human resources, office manager and worked in the registrar’s office.

What makes someone want to jump from higher education to elementary education? Summers said it was the Antioch School’s unique characteristics that caused him to make the transition.

“The Antioch School is really a model of what education should be,”  Summers said in a recent interview. “It is child-centered, democratic, nature-based and respectful of the individual child’s needs.”

The Antioch School, founded in 1921,  was the first democratic school in U.S. history, according to the school website. The small, private school functions very differently than traditional schools. One of the school’s early catalogs says that the institution was to be run with close, open-minded observation of the children, with programs created around each child’s needs rather than trying to fit them into a rigid curriculum.

The biggest difference noted by Summers is the school’s flexible curriculum. The curriculum is different for each child because they grow and develop at different rates, said Summers.

“Each child is different. They have different passions, strengths, and aspirations,” Summers said. “The students’ daily schedule, and our facility, allow them to explore, play and run — all essential to their developing minds and bodies.”

He thinks the teaching approach taken at the Antioch School has the ability to prevent issues like lack of motivation, anxiety about deadlines and grades, and fear of failure, which he saw frequently while working with college students in his previous position at SAA.

These principles of the Antioch School resonate with Summers, especially the emphasis on outdoor play. Summers, who earned his bachelor of science in biology from the University of Notre Dame, loves the green spaces of Yellow Springs. Outside of the school, he enjoys hiking in Glen Helen and John Bryan State Park with his family and dogs.

Summers was a naturalist for the Greene County Parks Department as well as John Bryan State Park between 1995 and 1999, so he sees how nature is an important learning tool for young children, he said.

The role of a school manager is different from a traditional principal in multiple ways. Summers will act as more of a facilitator for the school rather than having influence over the school’s academics.

He will provide the board of directors, the governing body behind the school, with tools and information needed for them to make decisions about the school.

At the Antioch School, the teachers act as board members along with parents to make all of the important decisions in regards to the school and the education it provides. This includes personnel hiring.

Christine Lipari-Althaus, the younger group teacher of five years, played a role in the hiring process for Summers’ position. Applications were first reviewed by a separate hiring committee within the organization before picks were sent to the board (consisting of faculty and parents) for interviews. Applicants talked first with teachers and then with parent board members.

Summers’ previous roles at SAA dovetail with other responsibilities Summers is taking on as school manager, which include finance management, supply purchasing, communications and management of the facility itself, which impressed Lipari-Althaus.

“I think because of the higher level he was at SAA, he had to facilitate a lot of schedules, meetings and conflicts with students and meetings with their professors,” Lipari-Althaus said. “He’s aware of how educational institutions work.”

Summers’ previous involvement as the chair of the Antioch School board gave him a lot of insight into how the school operates. When he saw an opportunity to play a larger role in the Antioch School community, he jumped at it. The commitment he saw from the school staff also made him want to become more involved.

“I really enjoyed working with our incredible faculty and staff. Everyone here is dedicated, hard-working, genuinely loves their jobs and loves being a part of this 96-year-old institution,” Summers said.

Lipari-Althaus echoes these sentiments about Summers. She said he seemed like a great fit for the school.

“[Summers] has a real love for education and nature that comes across when speaking with him,” Lipari-Althaus said. “He feels education is such an important part of being human.”

M.J. Richlen, who previously served the Antioch School as school manager for nine years and is now serving as assistant teacher to the younger group, feels Summers is a good fit with the school. During deliberation, she recused herself from the decision-making process because she had personal relationships with several candidates. She spent time with Summers since the beginning of June to help him with the transition.

“Since his children attend and he served as board chair for several years, he understands the school, which is not always easy to understand,” Richlen said. “He had an advantage, which is important.”

Richlen said he is understanding and kind, which is vital because his role involves a lot of interaction with the children. She said he has the patience and graciousness required for the job.

“What has really struck me about Nathan is that he seems really relaxed,”  Richlen said. “He is competent in his abilities and is introducing himself to the school community. He is just readily taking on all of the tasks that need to be taken on and is handling it beautifully.”

Summers, who recently transitioned from summertime school manager work to in-session duties, has enjoyed his first few weeks with the children present in school.

“I’ve found myself smiling from ear to ear on multiple occasions just by watching the children enjoy themselves while learning about the world around them,” Summers said.

Summers is happy to spend his days working within the Antioch community and interacting with the faculty, staff and children.

“It kind of feels like it did when I first moved to Yellow Springs 20 years ago — like I’ve found my home,” he said.

For more information about the Antioch School, which is still accepting student applications for the 2017-18 school year, visit its website, http://www.antiochschool.org.

*Jessica Sees is an Ohio University student intern at the News.