Did you know that it is still perfectly legal to discriminate against LGBTQ+ persons as it pertains to employment and housing in Ohio?

I celebrated greatly when the Supreme Court assured marriage equality in the country. But for those of us who were in the trenches, we were already working on the next issues that need to be redressed. I am ever-grateful to Equality Ohio for their stalwart work; it is a personal point of pride that they have twice called upon me to address an Ohio House committee. I first submitted and delivered remarks (linked here) on the so-called Pastor Protection Act, which is disingenuous down to its insulting name. No pastor anywhere in Ohio can be forced to perform a wedding they don’t want to officiate. It is just coded language meant to embolden bigots who like to hide behind Jesus.

We do not yet know who, if anyone, the committee will hear from during a legislative session. I post the remarks in hopes that faithful reader will feel compelled to voice support for some of our most vulnerable citizens. The stories that I have heard, especially from trans-persons, are heartbreaking. Without safe housing and stable employment, even the most intrepid individuals struggle to survive. If the housing and employment opportunities are not even protected by law, people have no choice but to engage in high-risk activities such as sex work or drugs. It’s either that or die.

I write from a specific perspective, that of being an Ohioan from before statehood, and a minister. Do you have stories to tell about why you think these protections should be in place? Join the discussion below.

My 7-great-grandfather Peter McCain left Ireland to come and fight in the American Revolution. He was a spy for General Washington and served under General “Mad” Anthony Wayne. He became the first white man to own land in what became Jackson, Ohio. I don’t believe he had the right to own this land, but I am nevertheless still fiercely proud to be of his line. Over the decades, my people have built churches, filled graveyards, and been invested in their communities. I descend from four great Ohio families: McCains, Spriggs, Howes, and Maurices. I am tenth generation Ohioan, a Buckeye to the core. 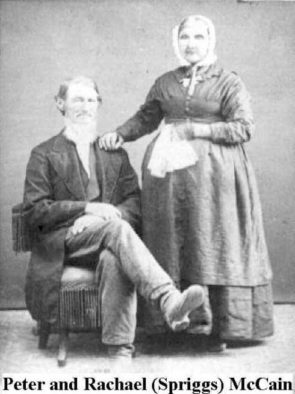 I want to tell you just a bit more about my Ohio lineage. Peter McCain’s grandson, also named Peter, was an early member of the Republican Party and fought in the Civil War. We were abolitionists through and through. My grandfather, Ivan Maurice, owned the Union 76 station in Urbana and was one of the few white mechanics who would work on the cars of his African-American neighbors. My mother, his daughter, has been on faculty at universities throughout the state, taught me early on that I have a responsibility to treat people well. My father did as well, but he’s from that place up North. To him, I say, “O-H.”

When I was a child, our state slogan was “The Heart of it All,” and I took that literally. Growing up in Yellow Springs, I was exposed to truly integrated community; the prejudices of the world have always imprinted themselves upon Yellow Springs, but since our founding, we have been decades ahead of statewide movement in terms of social progress. We’re imperfect, to be sure. But above all else, we try.

I am a minister of the Gospel of Jesus Christ. We Christians engage with a story each year, that of Jesus’ birth. We see living Christmas crèches with adorable children playing the Holy Family and enacting the whole menagerie. But the real story is much more brutal. An unmarried woman is mysteriously pregnant, is traveling with a man not her husband, and is about to give birth. Theirs is a society that greatly values children; the first commandment God gives is be fruitful and multiply. Yet, no hospitality comes. The couple wanders until they finally find a place. It is not a manger as envisioned in popular imagination; it is most likely hewn rock which, with a  crude canopy extending outward, will provide them makeshift shelter. It is muddy, cold, exposed, and riddled with bacteria.

I don’t know about you, but each year I want to be in that story and provide them a place to lay their heads. I wonder how the history of humanity might have changed with that one simple act of compassion. Is it any surprise that when the baby grows up he spends his life trying to show hospitality to those who were denied it? Because make no mistake, the State of Ohio is the innkeeper that won’t let people in.

I cannot tell you how many transgender persons I know who have been or currently are homeless because no one will rent them a safe place at a reasonable price. Trans persons are among our most vulnerable citizens. They are disproportionately victims of sexual and physical abuse and are murdered far more frequently than any other demographic subgroup.

But they aren’t statistics. These are people I know and love. Strong, loving, giving, fierce people who must fight every single day just to stay alive. Not euphemistically; a literal fighting so that they can live another day. We’ve had enough funerals for trans persons. You can help reduce the number. Vote in support of HB 160.

I want to address one final issue. The notion that religious freedom should allow innkeepers or landlords to deny housing to another human being is odious to me. It is a slap in the face to those of us who follow Jesus. Don’t want to rent to a certain segment? Fine. Don’t be a landlord. There is no right to engage in capitalism with your own rules; it seems in this country we value the marketplace more than human rights, so we must make capitalist arguments to justify ethical legislation. The price of entry to run a service-based business is you have to serve the marketplace you find, not the one you want. Because, again, we are dealing with ultimate stakes.

If trans people cannot find safe housing, they have a harder time keeping a job, which increases the chances that they will turn to sex work, which brings with it a whole host of issues including STIs, addictions, and being victims of hate crimes. Dayton, Ohio is currently the opioid capital of the country; it seems to me that the legislature would want to do whatever it can, especially if it is not a budget item, to provide more opportunities for stability. Fair housing is essential for anyone to have constancy.

I’ll close with this: Last month I presided over the memorial service of Lloyd Webster Kennedy, who went to be with the Lord at the age of 102.5. He lived in the same house since 1938; he was a member of the church I pastor for nearly 80 years. Mr. Kennedy was born in 1914. He saw so much change in his life—woman’s suffrage, civil rights struggles, a Depression, two world wars, gay rights—but he never felt threatened by it. When asked about gay people in our church 30 years ago he said, “why not? We don’t choose who we love, love chooses us.”

I hope this state can once again be the heart of it all. That we choose love. For that to happen, we first have to find our heart. Please, pass this bill. It is long overdue. Thank you.