Inspired by nature, and each other 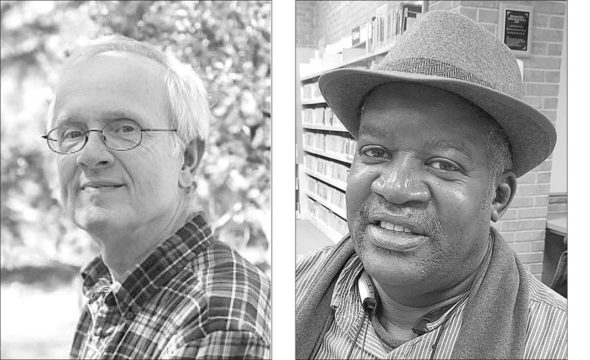 he Winter Solstice marks the astrological moment when humans experience the shortest period of daylight and the longest dark of night. But it also signals the end of deepening darkness, as light begins to lengthen incrementally each day until June.

It’s an ending and a beginning, as much as a moment in time, notes villager Ed Davis, a poet, novelist and teacher, who is also the lead organizer of the annual Winter Solstice Poetry Reading, co-presented each year by Tecumseh Land Trust and Glen Helen.

“Endings and Beginnings” is the theme of the 2017 reading, scheduled Friday, Dec. 8, from 7 to 9 p.m., at Glen Helen’s Vernet Ecological Building.

As a writer, Davis said he appreciates not only the creative imagery that the theme evokes, but also the nuance contained in its word order.

“It’s a reversal” of the typically heard phrase “beginnings and endings,” he said. “It makes you think different,” which is a hallmark of the artistic experience.

Marking its sixth year, the Winter Solstice Poetry Reading has become a local tradition of the holiday season, celebrating not only the coming of winter, but also Glen Helen Nature Preserve, Davis said. Amidst the flurry of activities that accompany the December holidays, people seem to welcome an event that’s “more introspective,” he said.

Fourteen regionally based poets are scheduled this year to read their original work in 3–5 minute slots. A wine and cheese reception follows the reading, with an approximately hour-long open-mic session concluding the evening.

“The poets are always urged to interpret the theme in any way they see fit,” Davis said. “They may not stick to Solstice. If ‘Endings and Beginnings’ strikes a note, that’s fine with me.
Davis said that Gary Pacernick, an award-winning published poet and longtime poetry professor at Wright State University, told him that he wasn’t sure if he had any nature poetry to share, but he might read something related to his wife’s death.

While this is Pacernick’s first year participating in the local event, some poets are returning for a second outing. Davis said that for the first five years he sought not to repeat readers, bringing forward a new slate of poets each December. And while the list of possible first-timers is not nearly exhausted, he said he feels good about bringing back some of the previous poets.

Among them are villager Audrey Hackett (who is also a reporter at the News) and retired Mills Lawn teacher MJ White, who lives in Xenia.

The evening’s theme relates personally to White as a writer, in that the longtime first- and second-grade teacher went back to school to begin the formal study of poetry after the conclusion in 2001 of her career in education.

Her work draws on personal experiences and observations, often expressed with wry humor. The natural world is a frequent inspiration, as is her dog, Nikki. White recently published a collection of her work, “How the Universe Says Yes to Me,” and has been giving readings of selected poems throughout the area.

Representatives of the writing group known as The Greenville Poets, several of whom also are returning for this year’s event, are expected to have books with them, as each has multiple published works. Group members slated to read are Cathryn Essinger, David Lee Garrison, Aimee Noel, Lianne Spidel and Myrna Stone.

Moyenda said that the 2017 theme sparked a personal memory for him. A case manager for St. Vincent DePaul homeless services in Dayton, as well as a fill-in staffer at Sam & Eddie’s books, Moyenda leads a local writer’s group that meets twice monthly at the Yellow Springs Senior Center.

He said that 20 years ago, he attended a poetry class at the Antioch Writers’ Workshop with Herbert Woodward Martin, the Dayton-based poet and authority on Paul Laurence Dunbar. At the end of the workshop week, the much-respected Martin participated in a faculty reading at the Glen Helen Building in which he opened with a poem that Moyenda had written as part of their sessions.

“I had already been writing, but that was a motivating experience for me,” Moyenda said recently. “It was kind of like a new beginning — like I might really be good at this.”

In addition to poetry, Moyenda said he currently is working on a novel, “maybe two,” as well as several short stories.

He described his poetry as reflecting his “experiences of being a person in the world, as a father, a worker, a member of the community.”

Moyenda said he values the opportunity to read his work among other poets. “It’s always a growth experience to read your work out-loud to a group of people.”

Cheryl Wood Smith, who has participated in several reading settings with Moyenda, agreed.
“It’s very inspiring,” said Smith, who started reading her work in public in the late 1970s as part of a Dayton-based group she founded called Creative Energy.

Also a psychiatric nurse and chemical dependency counselor, Smith moved to Yellow Springs in 1995, having fallen in love with the village while studying humanities at Antioch University.
Smith said her work tends to focus on her life experiences. “I do a lot of writing about being African American, being female. Social justice is a big theme for me.”

Organizer Davis said each of the participating poets are seasoned writers who offer unique, meaningful perspectives.

He also noted that the event always brings surprises, particularly in the open-mic segment, when audience members sign up to read. Last year, he was “blown away” by three Antioch students who participated in the open-mic.

A Tecumseh Land Trust board member and chair of TLT’s education committee, Davis said he shared that experience earlier this fall with TLT Miller Fellow Hollyn Bermond, who responded, “That was me!”

Davis, who had hoped to include Antioch students in this year’s event, immediately asked Bermond to come back as a featured poet.

Davis said he loves the added dimension of diversity that comes with featuring the college students alongside veteran writers. “We have diversity of race, gender and also age,” he said.
His hope is that the event reflects the fact that “poetry is universal” — like the experience of night giving way to day each Solstice.