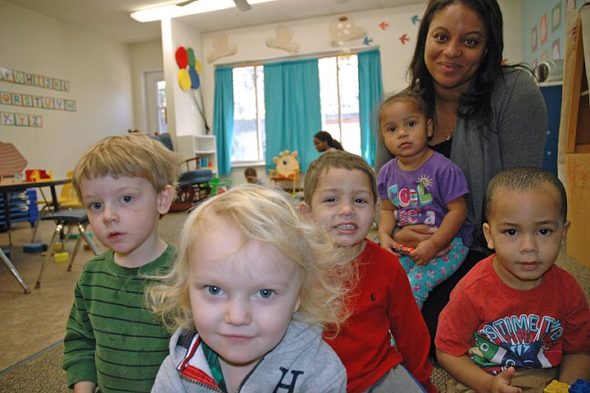 In her new job only a month, Yellow Springs Community Children’s Center Director Malissa Doster has already made changes. For instance, she’s cleaned up the center’s entry way, which previously had a cluttered look.

“This creates a calm feeling when you walk in,” she said in a recent interview. “I want to create a feel-good environment.”

Center supporters might be ready for a feel-good environment. More than 70 years old, the YSCCC has in the past three years been rocked by leadership changes, budget deficits and drops in enrollment.

But YSCC leaders believe they have found the right person to lead the YSCCC forward, according to Board President Amber Martin this week.

“She’s a good person to work with and has a solid background in child care,” Martin said.
And according to YSCCC board member Lisa Abel, “She’s the ideal candidate” for the job, bringing to it both experience as a preschool teacher and as the director of an early education center.

The manager of The Creative World of Learning in Fairborn for the past two years, Doster previously spent 10 years at the Greater Morristown (N.J.) YMCA, first as a preschool teacher and then in preschool administration.

What set Doster apart from other job applicants was her success managing teachers at her Fairborn job, according to Martin. Staff turnover, almost always a problem in preschools, had declined significantly since Doster took the job in Fairborn.

“She was attractive to us because she had a happy staff,” Martin said.

In an interview this week, Doster acknowledged that she worked hard to turn around teachers who she initially found to be dissatisfied at the Fairborn center. First, she asked her teachers what they needed — support and appreciation, they replied. So she made it a point to walk through their classrooms, asking to hear teachers’ concerns. She began handing out candy and giving thank-yous for jobs well done.

“I tried to put myself in their shoes,” Doster said this week.

Doster aims to use the same approach in Yellow Springs. She’s impressed with the passion and dedication of the center’s teachers, and wants to make sure they feel appreciated.

“I want the teachers to have a voice, to know that they can say, ‘This is what I’m struggling with,’” she said.

Currently, the YSCC employs 15 teachers, with two working with toddlers, two with 3- and 4-year-olds and two to three with pre-schoolers. Several more teachers work in the after-school program in conjunction with Mills Lawn School.

But Doster plans to take the center further, and aims for the vibrancy YSCCC enjoyed in the 1960s and ’70s.

To grow the center, she aims to not only provide a supportive teaching environment, but also win back the One-Star rating in the Ohio Step Up to Quality program, a voluntary rating system for pre-school and early childhood centers in the state. The ranking tells parents that YSCCC meets certain criteria for excellence in early childhood education, but the center lost its One Star ranking two years ago. Doster plans to regain the One Star, and then go further.

“I’m shooting for three or four stars in Step Up to Quality,” she said. To win that rating, the center needs to improve record-keeping and follow SUTQ guidelines regarding curriculum and lesson plans, among other criteria.

Having the training will help the YSCCC teachers feel confident with challenges they may face, Doster believes, and also enhance the center’s ability to effectively address any behavior challenge.

“I want us to be such an open and well-learned center that we can enroll anybody,” she said, stating that the YSCCC should embrace families of all social and economic levels, as well as children with disabilities and behavior issues.

Down the road, Doster would also like to see the center broaden its offerings to include care for infants. Currently, the center begins its care at 18 months, but Doster believes there’s a need for a facility for younger children. She hopes that the Children’s Center can take up the slack.

“Then parents could drop off all of the kids at one time,” she said.

Doster knows the need. She and her husband, an IT consultant for Speedway in Enon, have two children, Natalya, 8, and Isabella, 22 months, who spends her days in the YSCCC toddler room while her mom works.

Doster wanted the YSCCC job because she felt ready to more firmly guide an early childhood center, as opposed to following corporate guidelines, as she was required to do at the Fairborn center. She had heard of Yellow Springs as a “friendly and artsy” place, and is happy to have found this description to be true. She also feels closely aligned with the YSCCC’s play-centered approach to early childhood education.

“I love the philosophy here,” she said.

The foundation of Doster’s interest in the YSCCC is her love for children, she said. She’s felt an affinity for young children since helping her mother raise her four younger nieces and nephews when she was growing up in New Jersey. She went on to get a bachelor’s degree in Spanish, with a minor in early childhood education.

Even after getting older, she said, when she went to parties, “I was the one in the corner, playing with the kids.”

Indeed, on a visit to the YSCCC’s toddler room last week, Doster appeared relaxed and delighted when kids swarmed her, as she posed for a photo.

“They make me feel happy and warm, like a kid again,” she said.

YSCCC challenges
More than 70 years old, the YSCCC was started by Lucy Morgan, the wife of Antioch College president Arthur Morgan. It has been beloved in the community for many years as the only local option for early childhood and preschool care, although other options are now available.
In recent years, the center suffered enrollment decline, leading to the letting-go of longtime teacher and director Marlin Newell. That move prompted the resignation of many YSCCC board members several years ago.

After a new board conducted a national search, the center hired a leader who had significant management experience but little background with early childhood education. That director left after a few months. Then, a little more than two years ago, a former YSCCC teacher, Mary Stukenberg, became first interim, then permanent director of the center.

Under Stukenberg, the center regained its footing on many levels, according to Martin, and enrollment bounced back to more than 100 children. But last summer Stukenberg and the board agreed that she should step aside, according to a YSCCC press release, so that someone with more administrative experience could take the job.

According to Martin, even while enrollment has risen, the center still must address budget concerns.

“While our program is growing, we continue to rely heavily on the generosity of our community to be able to balance the budget at the Children’s Center,” she wrote in an email Monday. “We have donors that are extremely committed to the success of the organization. We are very lucky to be able to concentrate on moving the program forward, building an amazing team and on the success of the children.”

To address the budget needs, Doster has already reached out to the community, sponsoring YSCCC child-care events to help free up parents for holiday shopping (see sidebar, page 1). More community collaboration and outreach will be required to stabilize the center, but Martin believes Doster is up to the challenge.

“I believe she has the personality, and the ambition, to make it happen,” she said.