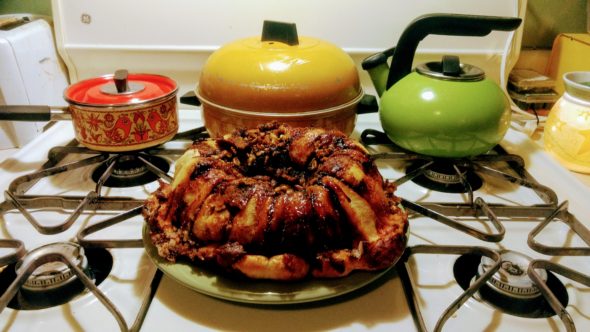 My 7-year-old daughter Lucy has never believed in Santa. This is neither my doing nor my husband’s — unless skepticism can be inherited genetically, in which case I blame her dad. She was born with a particular will not to have the wool pulled over her eyes, and this manifests in her disagreeing with essentially everything we say — just in case we’re lying, I guess?

I was similar as a kid, in that I never really and truly believed that there was an old chubby dude who monitored my annual movements and rewarded them with skateboards and Muppets Casios. Unlike my daughter, however, I had and still have a disposition that has made it so much easier for me to enjoy bad television and films over the years — I was born eager, almost desperate, to suspend my disbelief.

Because of this, on Christmas Eve, I patently ignored the hushed whispers and rustles of last-minute wrapping, gift arranging and Christmas cookie eating. I could hear everything, and yet I listened to nothing, preferring to believe that the magic just happened, that — POOF — it was all just there in the morning.

Part of that Christmas morning magic was my mom’s cinnamon sticky buns. If you haven’t tried sticky buns, they’re a sweet, gooey, nap-inducing treat that somehow got labeled as a breakfast food. You wake up, you tear open your gifts, and then you dig into some sticky buns, licking the residue off your fingers as you either suit up to play in the snow or lie back on the couch to ponder your new gifts and doze. They were part of the Christmas morning magic: they just kind of appeared.

Except, of course, that they didn’t. Looking at my mother’s recipe box as a young adult, I found that they’re not just “Cinnamon Sticky Buns,” but “Overnight Cinnamon Sticky Buns.” The recipe is easy, but as with so much that I now know to be part of parenting, the making of sticky buns does require one to think ahead — like me, they needed at least eight hours of rest before they could rise, resplendent on that long-awaited day. They were part and parcel of the late-night preparations my parents were making to maintain the beautiful Christmas ruse for another year.

Eventually, though, the jig was up, and my whole family tacitly gave up pretending Santa was coming to town. While the sharing of gifts and good tidings and, eventually, arguments, continued as Christmas traditions, somehow Santa and sticky buns slipped out of our family holiday lexicon, both part of the magic that fades when youth recedes, I guess.

I made them for the first time myself this week, and have already begun to tweak this (admittedly simple) recipe to suit my own tastes — which is, metaphorically speaking, what kids are destined to do with the creations of their forebears. I wonder what kinds of modifications my own kid will make if the sticky bun becomes a tradition in my own home — which I now doubt, as she told me this morning she thinks they’re gross.

God bless us, everyone.

1 package pudding mix (the original recipe calls for vanilla, I used butterscotch; use whatever you want, go crazy)

1 stick of butter, melted (though I suggest adding an extra half stick if you’re really committed to the best sticky bun experience)

Grease a 9-inch Bundt pan; sprinkle half your pecans. Arrange the yeast rolls around the bottom of the pan; you’ll most likely need to wedge them together on their sides for them to fit. Sprinkle brown sugar, pudding mix and the rest of your pecans over the rolls. If you’re using the white sugar — which I suggest, because I believe in excess — mix it with the cinnamon and sprinkle. If not, then just go ahead and sprinkle the cinnamon, party pooper. Pour melted butter over the whole thing. Cover loosely with a towel, and put the Bundt pan on a cookie sheet. Let it rest and rise overnight.

The next morning, bake at 350 degrees for 30 minutes; keep Bundt pan on cookie sheet, as contents will expand and spill. To keep the buns from over-browning, cover with aluminum foil for 15–20 minutes of that time. After cooling slightly, flip sticky buns on to a plate. Enjoy buns and follow with at least a good 20-minute snooze.

*This column appears in the Dec. 21 issue of the News; pick up a copy this afternoon at the News office or tomorrow on newsstands to read more holiday traditions submitted by villagers.