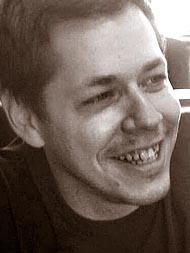 Born with the brightest blue eyes and a smile on his face Dec. 17, 1982, in Boston, Mass., he was a very happy baby, nicknamed “Smiley Boy” throughout his toddler years. He and his family moved to Yellow Springs when he was 7 years old. Atom loved growing up here and could frequently be found playing in the Glen, riding his bicycle around town or hanging out in the shops that sold trinkets and comic books and such.

He loved tinkering with computers and mechanical things. Even as a young boy he would bring home any sort of electrical items he found set out for the trash and entertain himself for hours taking them apart and putting them back together in all sorts of configurations. He was very creative and loved to draw and was quite fond of making his own graphic novels and drawing his own super heroes — which frequently included Bart Simpson in various guises.

As a teenager he returned to Boston for a time, where he made many friends and had a lot of adventures in Harvard Square and the Boston Commons. In his late teens he lived in San Francisco for a few years, and loved to regale his friends with tales of his exploits and the friends he made while there.

After moving back to Yellow Springs in his mid-20s, he enjoyed the small town life and, for a while, attended Clark State studying computer sciences. He enjoyed fixing computers for his friends and hiking in the Glen.

He had a passion for animals, especially dogs, and there were several who were lucky enough to have his love and companionship.

He had a sparkling wit, a wry sense of humor and many friends, to whom he was fiercely loyal. Always happy to lend a hand to someone in need, he took great pleasure in contributing to the happiness of others. He had a true streak of kindness and blessed many with his generous love and friendship.

His beautiful blue eyes, wonderful laughter, spirit, sense of fun and kind and giving heart will be sorely missed by his father, James Lisi, of Boston Mass.; his mother, Chrissy Cruz, of Yellow Springs; brother, Daniel Lisi and sisters, Jennifer Boone and Molly Cruz; his nephew, Zach Sanderson, of Yellow Springs; and his numerous aunts, uncles and cousins, nieces and nephews, and all his family and friends in “my town,” Yellow Springs.

Atom’s family have planned a memorial service for early spring and request that in lieu of flowers donations be made to “Yellow Springs PetNet” by calling 937-372-2044 to help animals in need of finding homes and medical care.