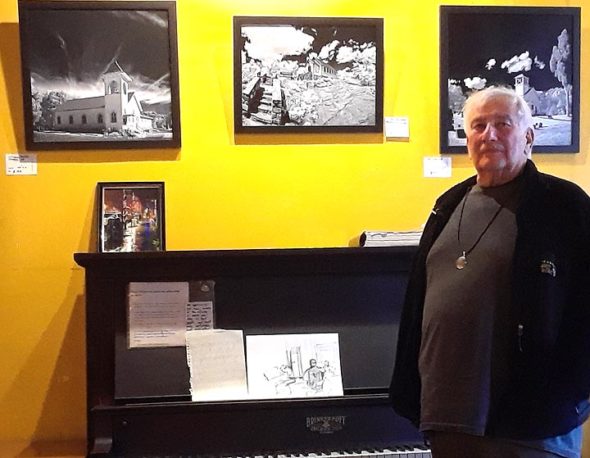 Photos by Yellow Springs photographer and psychologist Lincoln Castricone are on display at the Emporium through February. (Photo by William Drewing)

The magic of place: photos at the Emporium

A young family rode a train back home to the midwest from Los Angeles in 1946. The man of the household had been making his living as a draft artist during the war, sketching airplane parts for instruction manuals. His artistic vision was passed down to his son, Lincoln, who sat staring out of his train car window at the great Rocky Mountains, a memory that would stick with Lincoln all his life.

Villager Lincoln Castricone has been taking digital photos of landscapes and cityscapes since the turn of the millennium. His memory of that childhood train ride serves as an inspiration to capture landscape scenes that please the eye and jolt the imagination. Castricone’s work is currently on display at the Emporium. The dozens of framed or metal prints will remain there until March 4, before moving to the Yellow Springs Arts Council gallery to be displayed from April 20 to May 13.

“Landscapes evoke a sense of grandeur. They’re a place of familiarity and mystery,” said Castricone during a recent interview, as he recalled the feeling of adventure he had as a boy looking up at Colorado’s peaks and canyons with a youthful urge to climb them and explore what he couldn’t see from his distant vantage point.

A psychologist currently working with Jack Layh and Associates, Castricone made his move to Yellow Springs a year and a half ago from his previous home on the south coast of Oregon. He’s lived in Ohio before, spending about 25 years in Cincinnati, Athens and Columbus. Castricone knew Yellow Springs for its counterculture, and made frequent visits. He met his first girlfriend at the village in the early ’60s, a young woman studying at Antioch.

Castricone’s parents came from Columbus. His father was a fine arts painter from 1939 up to his retirement in the early 1970s. During WWII, the elder Castricone worked as a commercial painter and draft artist. He drew images for parts manuals to play his part in the war effort, and did some work for Walt Disney during those years spent in Los Angeles.

Chicago is where Castricone grew to an adult, before heading to Annapolis to attend college at St. John’s College. St. John’s provided Castricone with a liberal curriculum that focused on learning through the original works of the Western world’s greatest minds. Students of St. John’s learn through translating the teachings of Plato, Euclid, Nietzsche, Einstein and Woolf in the pursuit of creative thinking and effective reasoning.

Following in his father’s footsteps, Castricone tried his hand at painting while at the San Francisco campus of UC Berkeley. For eight years during the ’60s and ’70s, he painted geometric themes before falling for a different medium. Black and white photography became his passion for the next 10 years, until his career in psychology forced a hiatus.

Fast forward to the early 2000s. Technology had evolved quite a bit since 1980, and Castricone decided to pick up his old hobby. Only this time he was equipped with a digital camera, and now he could do much of his own printing at home.

His new Sigma and Canon cameras can take high resolution landscape photos, and software called PTGui makes it possible to stitch images together to create flawless panoramic photos. Infrared filters give Castricone the option to take photos that appear to be black and white, but look more like a negative because the lens reflects the temperature of an object as well as the light reflecting off of it.

Castricone does his own printing and framing. He uses a wide format printer with 12 colors to make the prints, and custom fabricates each frame himself. The tedious nature of connecting four mitre joints perfectly to make a square picture frame seems to be his least favorite part of each project.

“Printing is another art all in itself, but framing is a pain in the butt,” said Castricone.

The black and white photos of the late photographer and environmentalist Ansel Adams serve as inspiration to Castricone, just as his artist father and childhood train ride do. Castricone’s landscape photos of America mirror Adams’ images of America’s most iconic landmarks.

To Castricone, a landscape image has a sense of serenity that is lacking in detailed images of objects up-close. A plain, flat piece of land can be boring and uninspiring, he said, but adding relief in the form of rolling hills, mountains, a lake or a canyon gives an area personality. Relief causes mystery, the thought of what may be around each corner.

To see Castricone’s works, visit Emporium Wines and Underdog Cafe before March 4, or visit his web page at lincolncastricone.photodeck.com.

Will Drewing is a student at Sinclair Community College who is currently interning at the News.