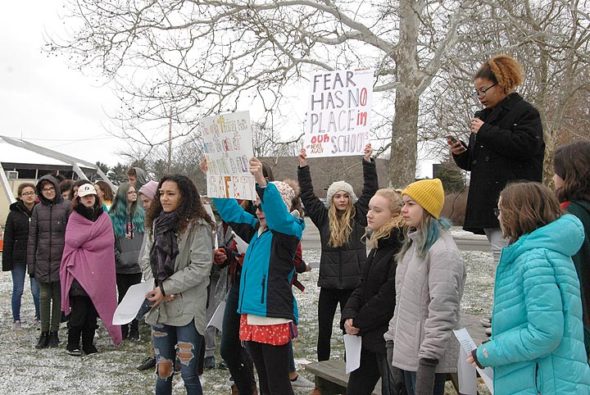 Local students joined the National Walkout School movement on March 14, with well over 100 students and some faculty and parents walking out of McKinney Middle/Yellow Springs High School to remember the lives of those killed in the Florida school shootings and to urge action on gun control and school safety. (Photo by Audrey Hackett)

Well over 100 local students, joined by a few faculty and parents, walked out of school at 10 a.m. Wednesday, March 14, as part of National School Walkout, protesting gun violence and urging gun control legislation. Students at hundreds of schools around the country took part in the walkout, held one month after the Feb. 14 shooting deaths of 17 students and staff at Marjory Stoneman Douglas High School in Parkland, Fla.

Organized by eighth-grade performance students and others, the local walkout at McKinney Middle/Yellow Springs High School featured student speakers reading biographies they had created of each of the 14 students and three school staff members killed in the Florida shootings. Speaking at times with gravity and feeling, students recounted details of the lives of those killed — their personalities, favorite sports, recent college acceptances, kindness to friends. One by one, student speakers got up on a picnic table in front of the high school and read the biographies to the assembled crowd.

Student speakers also urged action. “This is where it begins,” one speaker said. “Thoughts and prayers aren’t enough.” Students also chanted, “We call B.S.,” echoing a chant of the national protest movement, in a call to legislators and other adults to protect “children, not guns.”

In an interview with the News after the event, student organizer Maggie Knopp, an eighth-grader, called the walkout a success.

“It went really well,” she said. “This isn’t about just saying something but about empowering people to go home and make change.”

The local walkout, following the format of the national walkout movement, lasted 17 minutes, one minute for each person killed in the Florida shootings. When the event was over, students streamed inside.

In an interview with the News prior to the walkout, Assistant to the Principal Jack Hatert said school administrators would not be seeking disciplinary action against students who took part in the student-organized event.

“We’re not looking to provide consequences,” he said.

The event came off peacefully, and powerfully, Knopp believes.

“It was really powerful,” she said. “The energy all around, and just being in that space with students teachers and parents, was so empowering.”

Read the March 22 issue of the News for a more in-depth story about the walkout and local students’ participation in the upcoming March for Our Lives event in Washington, D.C.