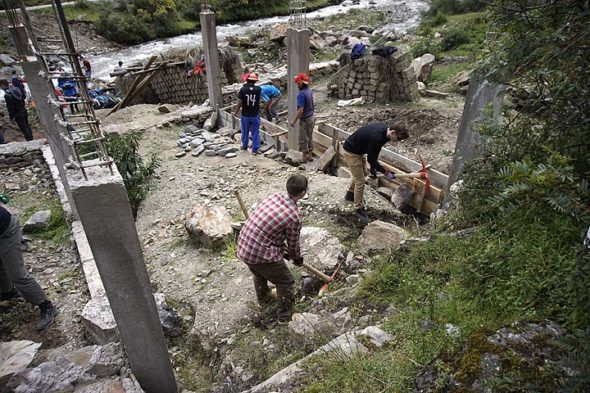 Thirty-five Yellow Springs High School students participated in a service-learning trip to Peru over spring break. The students helped build a structure for an indigenous women’s textile cooperative in the Andean village of Huilloc. (Submitted Photo by Eli Hurwitz)

A higher education in Peru

The three Incan “laws of life” served as guiding principles for the 45 travelers who participated in Yellow Springs High School’s recent service-learning trip to the South American country of Peru.

Thirty-five students, six chaperones and four accompanying adults learned a variety of words and phrases in the native Quechua language during the 10 days of their travel, according to district librarian and media specialist Eli Hurwitz, who served as one of the trip organizers and leaders.

Particularly important was the “Incan wisdom of sacred reciprocity — ayni — the belief that you do your best always and in return get the best back,”  Hurwitz said in a recent interview.

“It set the tone for the service work,” agreed art teacher Elisabeth Simon, who was co-leader with Hurwitz.

That work involved helping to construct a small, enclosed structure out of rocks and mud bricks to house activities of an indigenous women’s weaving cooperative in the country’s Sacred Valley.

The project was arranged through  a nongovernmental organization, Awamaki, which connects individual and group travelers with Peruvian women working to support their families and communities through culturally relevant activities. Awamaki’s focus and reputation is what prompted the Yellow Springs group to choose Peru as their destination.

The work allows for an immersive community experience, Simon said.

“We did not work for them, we did work with them,” using shovels, pickaxes and buckets, she said.

“The service experience was by far the most meaningful thing that we did,” Simon added.

“The best part of the trip was being able to service-learn,” she said last week.

She said the work helped abate a concern she had heading into the trip of being a tourist in a remote community.

“I didn’t want to disrupt the culture,” she said.

She also worried about not being able to speak the language. Most of the region spoke Quechua, not Spanish. But the language differences proved of little consequence, she said.

“Our minds were able to connect, and our bodies spoke,” she said.

Kiera Fogarty, a sophomore, said that one of the ways students connected with villagers was playing with the community’s children.

“They were all really sweet and wanted to interact with us,” Fogarty said of the kids.

Anna Millar, a freshman, said that doing meaningful work, and “knowing you were helping out” were important factors for her.

But the natural beauty and hiking to the top of Machu Picchu were other highlights, Millar added.

Classmate Spencer, who goes by the single name, described the experience of climbing Machu Picchu as entering a “sacred space.”

“You just feel everything stop,” the sophomore said, describing being overwhelmed by the “realization that there are other parts of the world and things you’re never going to see that are very different from here.”

The Machu Picchu hike was part of a packed itinerary that started in Lima with a tour of the city and a visit to Larco Herrera Museum, which helped put the history and culture of the region in context, Hurwitz said.

Other activities included visiting the Ollantaytambo Ruin, a market in the community of Pisac, a ceramics workshop and the Sacsayhuaman Fortress.

The pace of the trip could be a challenge, as was the constancy of spending so much time with classmates, students agreed.

Sulay Chappelle, a junior, said the experience could be overwhelming at times.

Besides the constant companionship, the introduction to unfamiliar places as well as the hard, physical labor, they also saw people living without electricity and running water, she said.

In the process, she said she witnessed the group grow more resilient to challenges while exhibiting deepening empathy for each other as well as the people they met.

“I really want to emphasize that some sort of service learning would so dramatically benefit all our students,” she said.

Two years in the planning, the Peru trip cost $3,500 for each participant, according to the district. Superintendent Mario Basora said that despite the cost, almost 20 percent of the high school population participated in the trip. Still, he said he would like to see donors come forward to help more students be able to go on any future trips.

And he hopes there are more such trips. “This was a kind of vision of ours,” as such experiences help form “global change leaders of the future,” Basora told the school board Thursday, April 12, during the board’s regular meeting.

Brown, for her part, said she feels changed by the experience. “I feel like my view of the world is bigger,” she said.

Millar echoed the sentiment. “Everyone lives in their own bubble,” she said. “You go somewhere else, and you’re not so focused just on you. You can see things with a little more compassion.”