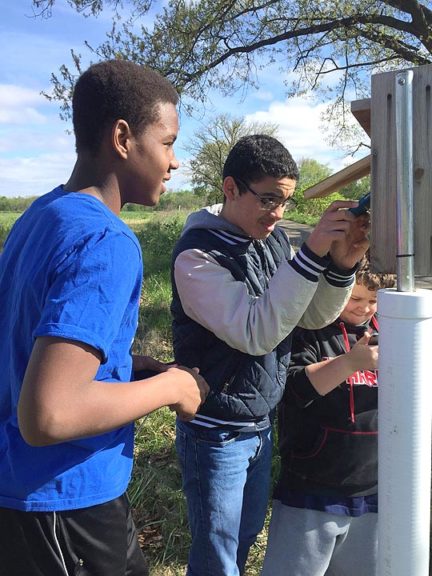 Operation Bluebird, a collaboration between Yellow Springs Schools and Tecumseh Land Trust that puts McKinney Middle School seventh-graders in the role of “Citizen Scientists” to monitor the activity at local nesting boxes, will resume this spring with a new crop of students. Pictured from last year, from left, are Aamil Wagner, Joaquin Espinosa and Jonathan Garrett. (Submitted photo)

There’s nothing quite like seeing a bluebird in its environment, especially for bird lovers.

“Don’t bluebirds just put you in a grand mood?” local expert Bethany Gray replied in response to an inquiry about a recent winter sighting.

Native to the area, but limited in population by farming practices and the introduction of European birds with similar cavity nesting habits, bluebirds and their health and welfare are the focus of an ongoing collaborative conservation program between Tecumseh Land Trust and Yellow Springs Schools.

Inaugurated last year, the project takes seventh-graders into the field to learn about the small azure-plumed thrush with the plump body and alert posture, along with other cavity nesters and their habitat.

“It’s exciting to see the process from nest to egg to fledgling,”  Eastman said earlier this week. “The students really get to connect with the birds.”

From a pedagogical standpoint, the hands-on  approach of the project is ideal.

“The level of engagement was really high,” she said of the first year’s effort.

Later this month and into May, this year’s seventh-graders will resume the work begun by the previous class, making five visits to a bluebird trail on Anderson’s farm, just south of the village.

There, the students will monitor activity at seven to eight nesting boxes, collecting data and tracking changes in and around the boxes, Eastman said. The time of year, the current temperature, the number of eggs laid, the number of subsequent fledglings are all included in the data noted.

The information will then be used in class work and individual research as well as shared with the national online Nest Watch project of the Cornell Lab of Ornithology.

To participate in the national data gathering program, the students take a “code-of-conduct” quiz and are certified as Citizen Scientists, Eastman said. Every seventh-grader successfully completed the certification last year, and she expects the same results this spring.

This year, Eastman’s class is also adding a component on climate change, examining differences in data between the two springs.

Anderson, for her part as the farm owner, a conservation advocate and an educator herself, is thrilled to see the program take flight.

When she bought the property on Snively Road in 2015, she intentionally sought out land that had a conservation easement, which protects the farm from future development. The previous owner, the late Xarifa Bean, “was forward thinking” in securing an easement on a portion of the property in the 1970s, before eventually conserving the rest, Anderson said.

In taking ownership of the property, which she named Xarifa Farm in honor of the previous owner, Anderson said she was interested in exploring ways to get more people onto the farm, in opening up her private land to community activities.

Operation Bluebird was an outgrowth of that desire, but was specifically inspired by a birthday gift from Anderson’s mother: a bluebird nesting box.

The simple gift reminded Anderson of a bluebird program in which her children, now 18 and 15, participated when they were younger and visiting their grandparents in South Carolina.

“I saw how it shifted their perspective” on nature and the environment.”

She was impressed at the powerful way a personal encounter can move knowledge from the theoretical to a deeper understanding, instilling a sense of relationship with the natural world.

And the observation stuck with her. “That was always kind of with me and in me,” she said.

The trails would serve as a means to help re-establish the bird in their native environment.

Anderson responded immediately and also shared with Magaw her desire of initiating a connection between the project and the school district as well. In the meantime, Magaw sought advice from villager Bethany Gray, a member of the state bluebird group with an educational background. Gray was happy to join the effort.

“We had a shared vision,” Anderson said.

She and Gray took their proposal to the local schools, where they united with science teacher Eastman.

The trio consulted on curriculum and logistics and introduced the program in the 2016–17 school year.

This year, the project is expanding from three to five site visits, after last year’s group recommended the extension.

To help with the project, organizers are seeking community volunteers to oversee the students while they monitor the boxes.

“It takes a real team effort to make the program happen, and our volunteers are critical,” TLT Director Magaw wrote in an email.

Helpers need not know anything about birds, Magaw added. They “simply need to care about conservation and community.”

Volunteers will work with three to four students for two 20-minute periods between 9 and 11:30 a.m. for as many of the monitoring days as they wish (Friday, April 27; Tuesday, May 1; Thursday, May 3; and Monday, May 7).

A volunteer orientation session will be held at 10 a.m. this Saturday, April 7, at Anderson’s Xarifa Farm. Interested community members should contact TLT volunteer Barbara Klopp, who is in charge of scheduling, at babsi.klopp@gmail.com or 937-503-9632.

The educational and environmental benefits of the project are clear, and “it’s also a lot of fun,” science teacher Eastman added.