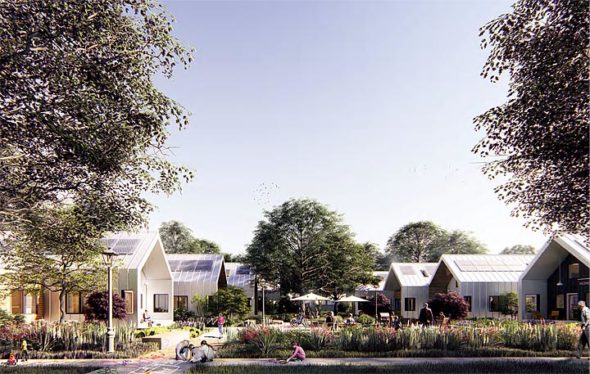 Antioch College is now looking for buyers for an eight-unit pocket neighborhood on East North College Street, the first phase of the Antioch College Village project. The designs of the neighborhood and its “deep green” homes, shown here in an architect’s rendering, were unveiled at a meeting last Thursday, May 24. Four of the envisioned units can be seen across a shared community area. (Rendering courtesy of McLennan Design)

Last week about 60 villagers came out for the unveiling of the Antioch College Village pilot project — a planned pocket neighborhood of small homes on the north side of East North College Street.

The pilot also “sets the tone” for the larger co-housing development to come, according to project architect Jason McLennan.

“It sets the tone around sustainability and community,” McLennan said. “I think it’s going to be a unique community.”The plan features four detached 875-square-foot, two-bedroom units and four semi-attached 730-square-foot, one-bedroom units on a little more than an acre. Their estimated price ranges from $190,000 to $240,000, depending upon size and optional features.

McLennan calls his design “deep green” because it goes beyond conventional energy-efficiency measures. The houses will be built with thick 12-inch walls, triple-pane windows, air-tight construction, non-toxic materials, energy-efficient appliances and will be equipped for net-zero energy and water use.

“All the work I do is green,” said McLennan, a Canadian architect based in Seattle, Wash.

McLennan, who is well known in the green building world for starting the Living Building and Living Community Challenge certifications, also envisions a community-oriented way of life for neighborhood residents.

“It’s intentionally arranged to create an interaction,” McLennan said. Prominent front porches “allow you the opportunity to get to know your neighbor yet still be in your own space,” he added. Shared social spaces like fire pits, benches and tables, a shared parking area and possibly shared gardens are additional design features that promote interconnection and resilience, he said.

“We want people to get outside and know their neighbors,” McLennan said. “We don’t want to let the automobile rule the community.”

One unit has already been claimed. Local resident Pat Brown has committed to purchase a one-bedroom unit, and she is opting for rooftop solar panels and net-zero water features. Pending county permission, her plan is for a composting toilet, a  water storage and filtration system to turn rainwater into potable water and a greywater recycling system, all of which McLennan has already designed.

Brown is downsizing from her 1,800-square-foot house on Stewart Drive and looks forward to a smaller ecological footprint and more communal living, she said in an interview.

“Mostly I was interested from the beginning in environmentally sustainable housing,” Brown said. “My second interest was in cohousing.”

While the neighborhood will not technically be a cohousing community because it does not include a common house, McLennan described the pilot as “cohousing lite” and “part of the cohousing spirit.” A group of about 15 villagers, the Eco-Village Pioneers, had been meeting around the idea of cohousing at Antioch for about three years, but stopped meeting last fall when the project slowed.

But the pilot neighborhood is just a “small piece of the puzzle,” according to Antioch College Village Project Director Monica Hasek, citing Antioch’s larger vision for 34 housing units on college land across the street.

“We wanted to get some momentum on the project, but also show real life examples” of the design, said Hasek, who is now working part-time as project director in addition to her role as director of the Wellness Center (she is also married to News co-owner Bob Hasek).

The larger plan, developed after a five-day public design charrette in 2015, includes a three-story apartment building, townhouses, cottages and a shared common house, but is contingent upon financing. Antioch is actively looking for developers or investors to partner on both the pilot and the larger project, according to Hasek.

“Antioch has very valuable land and we’re bringing that to the table, but we are looking for a co-developer,” Hasek said.

A Village zoning change last year paved the way for this first phase. The new pocket neighborhood development conditional use, which allows for much higher density, made the neighborhood  financially feasible, McLennan said.

“It opened the door for this project,” he said.

Technically, Antioch is not selling but leasing its land for the pilot neighborhood. The benefit for Antioch is that with a long-term, 99-year renewable lease, the college will see a regular cash flow from the project, according to project advisor Kevin McGruder, who estimated that amount to be $5,000 to $10,000 per year for the pilot.

“One of the reasons [the board] wanted us to move forward is because sustainability is a core part of our mission, but as anyone who is in this area knows, we need money,” McGruder said at the meeting.

For neighborhood residents, that monthly lease payment will be in addition to a homeowners’ association fee, which will cover grounds maintenance, property taxes and a mortgage payment if they have one.

Antioch could break ground on the pilot neighborhood in the fall, provided that $50,000 can be raised for architectural renderings and at least four units sold, according to Antioch Board Member Malte von Matthiessen, board liaison for the Antioch College Village.

Village Council Vice President Marianne McQueen asked about the costs associated with green features and their payoff, saying, “the greener you get, the more expensive you get.”

McLennan responded that the cost of many green products has dropped in recent years, that the optional solar panels should be paid off in 10 to 12 years and that while the materials are more expensive, they will also last longer.

“We want to make sure the materials are healthier and greener but also just durable, better quality materials,” McLennan said.

During the meeting, project leaders made it clear that this neighborhood is not aimed at solving all of Yellow Springs’ housing challenges, the most significant of which, according to villagers in a recent survey, is affordability. Von Matthiessen said that this pilot project is more about sustainability than anything else.

“We have a number of existing affordable housing projects, but this is really focused on ecological sustainability,” he said.

Von Matthiessen added that Antioch is  sensitive to affordability concerns, and that even if the final cost to build the homes comes in higher than the estimate, Antioch will “insist on that price range.”

On affordability, McLennan said that new construction is always more expensive because of the need to pay present-day labor and materials costs — the cost per square foot of the new homes would be twice the median square foot sales price in the village, which was $130 last year. But green buildings also come with benefits, including lower operating and maintenance costs, he said.

“There are benefits to green construction. You don’t have to replace a furnace … or you won’t have a drafty building with high energy and water bills,” he said.

Antioch is also in preliminary discussions with Home, Inc. about offering one of the neighborhood’s units at a lower price, according to Home, Inc. this week.

Addressing a technical question, local contractor and project consultant Andrew Kline of Green Generation Building displayed the structurally insulated foam panels that will be used to construct the walls and roof. Three times as thick as a conventional building’s walls, Kline believes they will make a difference for energy-efficiency and comfort.

“You have pretty comfortable results living in a house with a  12-inch wall,” Kline said.

Attendees also asked if the homes will have rammed earth walls (they won’t), how rainwater collection will work (a cistern in the cellar) and if anaerobic digestion is being considered for waste treatment
(it’s not).

In response to a question about toilets, McLennan said that they will be low-flow unless Greene County agrees to allow composting toilets, which are currently not permitted. Antioch is hoping for an exemption as a demonstration project, according to McLennan.

Brown is hopeful the net-zero water features will move forward, in which case she will not be connected to Village water or sewer but will collect, use and recycle all her water and wastewater onsite.

“I want the college to push the envelope and I think they are in a position to go to the [county] health department to do that,” she said.

Thinking about the ideal mix of the neighborhood, McLennan said it is well-suited for intergenerational living, which would “create a richer community experience.” Seniors opting for ADA-compliant features could age in place while millennials seeking community are equally accommodated.

“They don’t want the 1950s version of suburbia,” McLennan said.

McGruder said older villagers who want to downsize, first-time home buyers and a couple with one child are a few of the groups he envisions being attracted to the project.

Brown is grateful to be downsizing and also looks forward being in the heart of town and Antioch. She might take a few college courses and hopes to offer her skills in genealogy research for a possible student project.

“I’ll be a half-mile from everything,” Brown said.

In addition to the ability to take courses, campus amenities for residents include the Wellness Center and farm-to-table dining, according to Hasek. It’s all part of the Antioch College Village master plan.

“The overall vision is for lifelong, experiential living,” Hasek said.

The original impetus for the Antioch College Village came from former Antioch College President Mark Roosevelt. Green building and community consultant Sandy Wiggins was then brought on board to lead the 2015 charrette in which several hundred villagers participated.

Wiggins then enlisted national green building expert McLennan to join the effort in 2016. The winner of the Buckminster Fuller Award among others, McLennan has completed green building projects around the country, from small homes to large commercial buildings, showcasing some of his work at the meeting.

McLennan has donated most of his time because he believes in the project, he said.

“We want to see more green projects in Ohio and not just on the coasts,” he said. “[Our firm is] interested in re-thinking how people live and being more intentional about community and resource use, so it was a nice fit.”

Filling out the project team are Hasek, who has a background in real estate and worked for 10 years in commercial interior design and project management; McGruder, who has 30 years of experience as a community development housing specialist; and von Matthiessen, the former president and CEO of YSI, Inc.

For more information about the project, email acv@antiochcollege.edu.