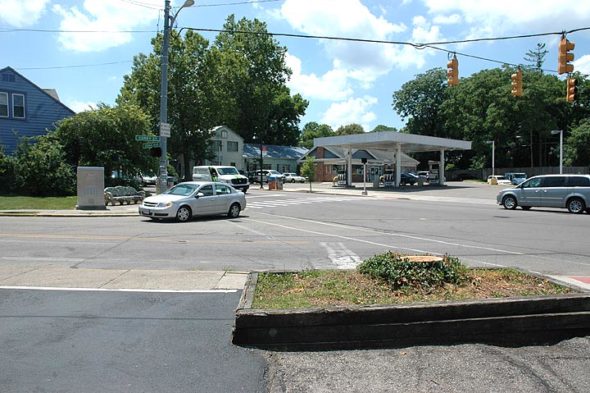 The stump of the recently removed Bradford Pear tree sits alone in a downtown planter.

Downtown tree removed, to be replaced by native species

Last week, a tree was removed by village workers from the planter box at the corner of Xenia Ave. and Corry St. based on a recommendation by the Yellow Springs Tree Committee.

The tree, which stood in front of Subway, was a member of an invasive species called the Bradford Pear, the same species which used to border downtown village sidewalks until they were removed and replaced with trees native to Ohio in 2013. The newly removed tree will be replaced in kind, according to Macy Reynolds, president of the Yellow Springs Tree Committee.

“If you take out an invasive species, you’re better off replacing it with a native one, otherwise it might come right back,” she said.

Bradford Pear trees were placed on the Ohio invasive species list this year, meaning that nurseries will have to phase-out the sale of the trees over the next five years. However, while the trees are just now being sanctioned for their invasiveness, the history of the Bradford pear tree in America goes back about a century.

The Bradford Pear originates from cross-breeding done in the early 20th-Century between the American pear tree, threatened by a disease known as fire blight, and the more robust Asian Callery Pear tree. Originally, the Bradford Pears were sterile and could not reproduce, but as they mixed with native pear trees, they began to bear fruit, spreading like wildfire around the midwest.

The Yellow Springs Tree Committee has been working to remove and replace local Bradford Pears for quite a while, fearing that they might spread into the Glen and endanger native species.

In addition to their tendency to crowd out other trees and plant life, Bradford Pears are also criticized for their odd-smelling flowers and their rather unstable branches, which sometimes fall off after about 15 years, creating a safety hazard.