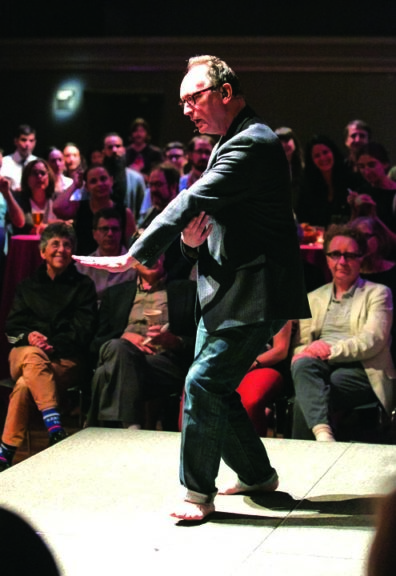 Guest artist Paul Lazar of New York City will visit Antioch College this Friday to put on a solo performance piece, “Cage Shuffle,” in which he recites the stories of experimental artist John Cage along with a movement sequence. The title is so named because Lazar is fed the stories through an ear bud using an iTunes playlist set to shuffle. The performance is Friday, July 20, at 7 p.m. at Antioch’s Foundry Theater. (Submitted photo)

“Cage Shuffle” will take place at the Foundry Theater at Antioch College at 7 p.m. on July 20. There is no cost for the performance, but donations are appreciated.

In a recent phone interview, Lazar said this is his first time developing and performing a solo piece.

“I was drawn specifically by the material I’m working with,” Lazar said. “Cage was a maverick.  He was so significant in experimental art of all forms.”

The performance’s foundation is short anecdotal, one-minute stories about Cage’s life that the composer wrote in 1963. Lazar describes these story snapshots as “wise, funny, thought provoking, and extremely entertaining.”

The length of the piece is fluid and usually Lazar ends up reciting around 20 to 25 of the stories per show.

The experience that the show offers the audience is unique, Lazar believes.

“It’s the opposite of having a fourth wall,” he said. “It’s almost a conversation with the audience. Like I’m telling stories in first person as John Cage.”

While the order of the stories is random, the movement sequence that Annie-B Parson, Lazar’s wife, has choreographed for the piece is not, and was inspired by different small dances archiving their work over the last 25 years with Big Dance Theater.

The relationship of the movement to the words can be startling, Lazar said. There have been moments in past shows where audiences are convinced that it was choreographed to fit that moment with those words, but that’s not accurate.

“There was no predetermined idea of how the movement and text would interact. The movement relating to the words is uncanny. There is something transcendent about it,” Lazar said.

Smith’s hope is that the Foundry Theater be used as a laboratory or an institute of some kind, she said recently, as well as home for collaborative projects between the college and the community.

“The college is so small right now,” she said.” I would like nothing more than for a presence and for the place to be used. I see it as a cultural resource for the town. When the town is involved in the Foundry, the students get more out of it. The Foundry needs to be used.”

Smith’s practice is in solo performance; she says she has been fortunate in
recent years to receive support for her solo work. In 2016 she was
recognized with the Individual Excellence Award from the Ohio Arts
Council. Her work is about writing and performing the self, she said.

“It’s the idea of the presence of the artist and their embodiment in
the room,” she said. “I feel connected with an audience. They become a collaborator, an artistic partner, a
co-creator in the meaning of the work.”

Those with questions can contact Louise Smith at lsmith@antiochcollege.edu.

Graham is an actor, director, playwright and freelance writer.