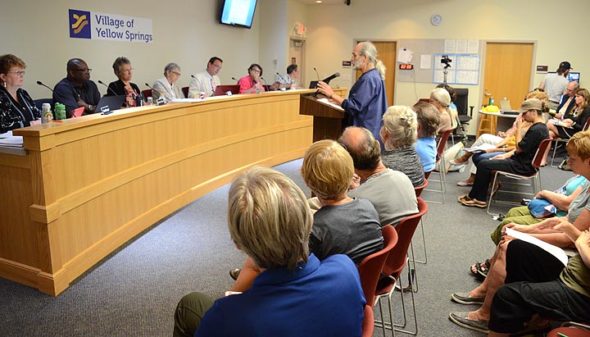 Because the potential discipline of Cpl. Meister was not on Council’s agenda, community members spoke during the citizen’s comment period and were allotted three minutes each. Council members then responded.

In an occasionally-tense back-and-forth, citizens also shouted from the audience, booed a Council member’s comments and vigorously applauded one another’s remarks despite being asked not to clap. About 30 citizens attended and the discussion lasted close to an hour.

Several citizens expressed support for Meister’s policing style and commitment to the community, which they said exemplifies community policing, and framed the recommended discipline for Meister as overly harsh.

Council members noted their inability to share details due to the ongoing nature of the disciplinary investigation, urged respectful discourse and emphasized their ongoing work to transform local policing.

Local resident Jessica Thomas said at the meeting that Meister “exemplifies what community policing looks like,” and she encouraged the development of a “best-practice protocol” for the department based upon Meister’s approach to policing. She contrasted Meister’s style with that of a former police officer who was fired in 2016 for using excessive force, and criticized the severe discipline recommended for  the kind of policing she believes the community wants.

“I think this is just a disgusting display of abuse of power and we’re tired of it,” Thomas said.

Gail Pettigrew said that if there was a problem with Meister’s actions, he should be counseled instead of disciplined, noting that docking his pay with a proposed three-day unpaid suspension was especially punitive. She questioned whether Meister could have significant past indiscretions if he was a finalist for Police Chief in 2017.

Pettigrew also contrasted Meister’s actions in the two incidents in question with the “heavy-handed approach” on display during the New Year’s Eve incident in 2017.

“We have an officer that is lenient who is being punished for it — outrageously punished,” Pettigrew said. “And I think this Council needs to stand up and do something about it.”

Liz Porter also cited the “New Year’s Eve debacle” as leading to a chorus of support for community policing, which Meister, she said, evinced during the March incidents.

“It seems Dave’s actions are in exact alignment with the de-escalating, humane wishes of the community, harkening back to the time when James McKee was chief,” Porter said.

Porter pointed out the need for the police department to have clear guidelines and train its officers in how to use  discretion. Without such clarity, Porter said, “the door is wide open for an individual within the force to be unfairly singled out for discipline when they have implemented informed discretion.”

Carlos Landaburu said Meister should be commended for his leniency; Sharon Moehler pressed for more transparency in police activities; Alisa Meier contended that police officers are bullying one another and citizens; Uta Schenck suggested that officers like Meister can best help troubled youth; Jeff “Pan” Reich said Meister may be being unfairly targeted, and Matt Raska blamed Council for not responding to community pressure to change local policing after the New Year’s Eve incident.

Council President Brian Housh contended that Council has worked diligently in its efforts to transform the local police department, from drafting guidelines for community policing to working with the Justice System Task Force.

“It’s ridiculous to say that nothing has changed,” Housh said.

Housh added that everyone involved believes Meister is an “integral part of our police team” and that the Village wouldn’t invest so much time and money in community policing only to try to remove Meister.

“It doesn’t make sense that we would be going after someone like David Meister and trying to get him off the force,” Housh said. “We are doing everything we can to rehabilitate the situation.”

Council Vice President Marianne MacQueen also defended Council’s record on local policing matters, saying “we are in the process of trying to change things.” MacQueen added that while “everyone loves David Meister” the disciplinary situation is unrelated to public opinion.

“This is not about David Meister as a wonderful person, as a committed community member or as a police officer committed to community policing in the best sense of the word — this is not what this is about,” MacQueen said.

Instead, MacQueen told villagers that much of what they’ve heard about the Meister situation is wrong and that personnel issues are not, nor are they meant to be, transparent.

“This is not something the community gets to make a decision on,” MacQueen said.

Council member Kevin Stokes urged citizens to “respect the process” of the ongoing investigation, questioning whether the public should have access to any information about a personnel issue.

“What troubles me, quite honestly, is why I or anyone else in the village knows what we know about an internal, private disciplinary issue,” Stokes said. “Why are we even talking about this?”

Stokes said that if citizens petitioning Council knew the whole story, they would still likely praise Meister but would end their letters differently.

“If you knew the entire story your letter would have ended with, ‘Good job, Chief Carlson,’” Stokes said.

In their comments, Council members Lisa Kreeger and Judith Hempfling focused on the future of community–police relations and how to heal from what they noted has become a divisive situation.

“I’m trying to understand how we are going to end up resolving this issue in a way that preserves the best possible relationships,” as well as the community’s trust in the police and Council, Kreeger said.

As the community discusses the ongoing situation, Hempfling advocated for communication that avoids name-calling, fear-mongering and “expecting the worst” about one another. She concluded her comments by saying that, locally, everyone is on the same page when it comes transforming policing.

Hempfling, along with a few citizens, pointed out the complexity of an officer both living and working in the community. Hempfling went on to emphasize the importance of clear  guidelines in that case.

“Those deeper relationships makes the enforcement of laws in a safety-centered way more complex when you actually know the people you are interacting with,” she said.

In responding to questions about the disciplinary process, Village Solicitor Chris Conard said he estimates that the situation will be resolved in the next 21 to 30 days and that the Village isn’t rushing it.

“The process will be one thing for sure — it will be fair,” Conard said.

Village Manager Patti Bates added that transparency isn’t possible until after the disciplinary action is decided.

Other items from Council’s July 2 meeting will be covered in next week’s News.