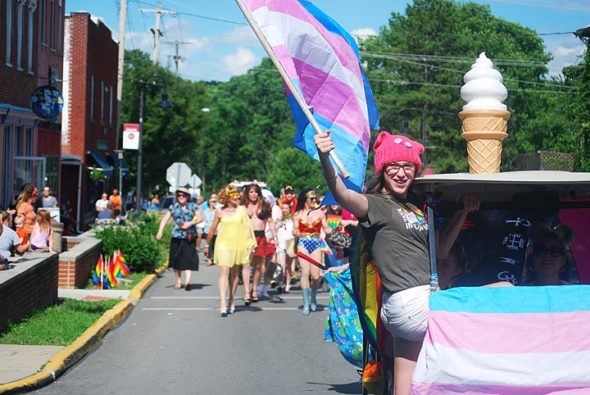 The village’s LGBTQ comnunity and allies will celebrate YS Pride this Saturday, June 30, with a festival beginning at noon and continuing through the day until 5 p.m. in the parking lot of Peach’s. The Pride Parade begins at 5 p.m. from Peach’s parking lot, and continues downtown. Pictured above is Zay Crawford, a proud participant who led last year’s parade. (News archive Photo By Aaron Zaremsky)

Villagers can’t help but notice that the number of rainbow flags displayed in shop windows and hanging beside business doorways have increased steadily all month, offering a sign of support for the lesbian, gay, bisexual, transgender and queer, or LGBTQ-plus, community.

June is widely recognized as LGBTQ Pride Month, chosen in recognition of the 1969 Stonewall riots in Manhattan that occurred in late June and launched the gay rights movement.

The annual local celebration — YS Pride — will be celebrated this Saturday, June 30, with a free festival from noon to 5 p.m. behind Peach’s Grill, immediately followed by a community parade through town, plus musical performances into the night at Peach’s and a free 6 p.m. documentary film screening about the Dayton-based Rubi Girls drag performance troupe, featuring a  discussion with members of the group, at the Little Art Theatre.

“It’s a great visible way to support Yellow Springs Pride,” Anderson said this week. “One of the things that makes Yellow Springs so special, is that it’s so diverse and inclusive and welcoming, and we’re just proud to associate our business with those values.”

Yellow Springs has a long-held reputation as being an “oasis” for LGBTQ people, Yellow Springs Mayor Pam Conine affirmed this week.

“It’s why so many of us chose to live in the village,” she said.

Data bears out the widely held impression that the village has higher LGBTQ-plus numbers than most communities.

According to a 2014 study by the Columbus-based Community Research Partners, now known as the Thoughtwell company, Yellow Springs was identified as “the gayest village in Ohio.”

Based on U.S. Census numbers, the Thoughtwell analysis set the total number of same-sex couples living here at 56, more than any other village in the state, and even more than most small cities with populations of 5,000 to 49,999. Perhaps even more significantly, the local per capita of 35.18 same-sex couples per 1,000 households is the highest of any community, of any size, in the state.

And that doesn’t include single individuals.

“Yellow Springs Pride is important not only for the LGBTQ villagers, but for those in surrounding communities, and dare I say, the southwest corner of the state,” she said.

The motto for the local festivities is “Be Yourself Here,” and organizers stress the event as a welcoming space for all attendees.

“We want people most of all to feel safe,” Ann Simonson, head of the organizing committee, said earlier this month.

Although LGBTQ-plus people have begun to see widening cultural acceptance, including marriage equality, which was federally mandated in 2015, bigotry, discrimination and even violence remain a fact of life.

According to a recent report from the National Coalition of Anti-Violence Programs, and reported in the “Moneyish” online publication, at least 52 LGBTQ individuals were killed because of their sexual orientation or gender identity in 2017, an 86 percent increase from 2016. The report considered only single incidents, and did not consider events of mass violence, such as the Pulse nightclub shooting in 2016.

Most targeted were transgender women, making up 40 percent of the 52 LGBTQ homicide victims.

In terms of discrimination, 31 states, including Ohio, have no explicit statewide protections for LGBTQ citizens. The Village of Yellow Springs, however, was in the forefront in being one of the first municipalities — now numbering 19 across the state — to pass non-discriminatory legislation.

Relatedly, gay conversion therapy — the discredited practice of trying to change a person’s homosexual or bisexual orientation by psychological or spiritual means — is still legal in 41 states, according to the New York Times.

Villager Melissa Heston, who has dressed as Wonder Woman for past year’s YS Pride parades, is well aware of the challenges that remain for LGBTQ-plus people.

While she and her long-term partner Mary Kay Smith are now legally married, they still must have a will in place that clearly stipulates the division of property and the care of their children in the event of either of their deaths.

And even with that, should the will be challenged, “it still depends on who the judge is,” whether their family’s integrity is upheld, Heston said.

As a longtime participant in Pride events, going back to her years living in New York City, when the HIV/Aids epidemic was decimating the gay community, Heston worries that the feel-good focus of many contemporary Pride events ignores the continuing challenges faced by LGBTQ-plus people.

“It’s not all rainbows and unicorns,” she said.

One of her biggest concerns is for LGBTQ-plus youth, who experience significantly higher instances of suicide and attempted suicide than their heterosexual peers.

According to the Trevor Project, citing a 2016 study by the Centers for Disease Control  and Prevention, “LGB youth are almost five times as likely to have attempted suicide compared to heterosexual youth.” The Trevor Project is a national organization that provides crisis intervention and suicide prevention for LGBTQ-plus youth. The group also has reported that suicide attempts by LGB and questioning youth is four to six times more likely to result in injury or overdose requiring medical attention than their straight peers.

Local youth interest in LGBTQ-plus issues and concerns is evident by the numbers of students participating in the high/middle school’s Gay Straight Alliance, Heston noted. She estimated that the group had more than 50 members this past year. Originally a high school organization, it extended to the middle school last year in response to students’ requests.

Heston said she would like to see the group, which offers support and community, be offered at the elementary school as well.

“Kids are coming out as young as 9 or 10,” she said. And there are children of nontraditional families who might welcome the affirmation, as well.

“There’s still so much bullying going on right now. We hear about it all the time,” she said.

Thus for Heston, Pride remains as it began — “as a protest.”

“We’re still struggling with being second-class citizens,” she said.

“It’s political,” she added. She’s happy to see allies joining in parades and hanging rainbow flags, “but where it counts is with their dollars and their votes,” she said. Medical causes — continuing AIDS research, working with transgender youth — need financial support, while voting for leaders who support equality for all is paramount.

Local Pride organizer Simonson said that the desire for “social justice for everyone,” is  at the heart of YS Pride.

Young people “are still being kicked out of their homes for being gay, for being transgender,” Simonson said.

“‘Be Yourself Here’ drives us,” she added. “We want people to feel comfortable because they feel safe.”

Toward that end, the day will be divided into a family-friendly daytime festival — with vendor booths, food and beverages, a misting area and a play area with hula hoops and big beach balls, from noon to 5 p.m. behind Peach’s — and more adult-oriented nighttime performances inside the venue, including a Rubi Girls show at 10 p.m.

Simonson noted that some Pride events in other locales have reputations for R-rated behaviors that may not be appropriate for children. The YS Pride organizers wanted the sense of safety to extend to the younger members of the community as well.

At last year’s festival, a woman from Cincinnati told the News that she preferred the smaller, quieter Yellow Springs event over her own local festivities for that very reason. She said she also felt safer in terms of the possibility of protests or violence against celebrants.

About 400 people attended last year’s festival, which featured 15 vendor booths, Simonson said. Twenty booths were registered earlier this month to take part this year. She said the event operates on a “shoestring” budget of about $5,000.

Mayor Conine said she hopes the festival and the village continue to grow as “a mecca” for LGBTQ-plus people.

“Let’s have a huge splash of rainbow color throughout the day,” she said.