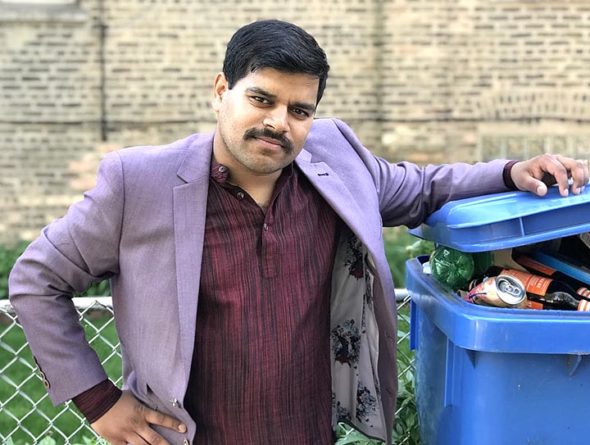 Yellow Springs native Kumar Jensen, 29, was recently recognized as one of Greenbiz magazine’s 30 environmentalists under 30 list. He is the only government employee to make the list. (submitted photo)

Sustainability comes naturally to Kumar Jensen, who grew up in the Vale. As a child living in the intentional community just south of Yellow Springs, he would spend whole days playing by the river with the other kids from the neighborhood or helping his parents tend to their one-acre vegetable garden.

Those humble beginnings laid the foundation for a promising career in the field of environmentalism, a career which would take him far beyond the gravel road that was once his driveway.

Jensen was recently named by GreenBiz — a trade magazine covering the field of environmentalism — in their “30-under-30” list of promising young environmentalists. Jensen, 29, currently works just outside of Chicago as the sustainability coordinator for the city of Evanston, Ill., but his taste for environmentalism was cultivated right in the backyards of Yellow Springs.

“I spent the majority of my time running around [the Vale],” Jensen said in a recent phone interview. “The parents took it in shifts to look after us kids, it just depended on where we congregated.”

Jensen said that while he did not realize it at the time, his years living in the Vale, biking everywhere and utilizing composting toilets, gave him an early understanding of what it meant to live sustainably.

“Those things became a baseline,” he said. “A lot of them became habit. They just seemed obvious to me because of where I grew up.”

After high school, Jensen spent a year living in southern Argentina as an exchange student. While he was there, he became frustrated with the way locals disposed of their garbage and became involved with a local nature center to help clean up litter. It was Jensen’s first glimpse at the industry with which he would soon become fascinated.
Back in America, Jensen attended Earlham College in Richmond, Ind., as a Bonner Scholar, a program that promotes education through public service. It was through this scholarship program that Jensen first began working in local government and in the field of environmentalism, realizing in the process the power that social and political systems can have on sustainability.

Jensen began working for the city of Evanston in 2014 and was promoted to sustainability coordinator just over a year ago. In that capacity, he has worked tirelessly to help Evanston meet its sustainable energy goals — modeled after the Paris Climate Accords — by providing citizens clean energy options, requiring large buildings to report their energy and water use, and by coordinating with other large cities to directly support the development of renewable energy.

Evanston is one of eight cities currently surveying its energy needs as part of their participation in a plan spearheaded by the City of Boston to create large-scale renewable energy projects in cities around the country.

Jensen’s commitment to environmentalism in government landed him a spot on the GreenBiz 30 under 30 list, which honors up-and-coming environmentalists from around the world. He is the only government employee who was honored with the award, though winners came from eight different countries on four continents. The recognition placed Jensen among a cohort of CEOs, entrepreneurs and engineers, many of whom work within the world’s largest companies, such as Amazon and FedEx, according to Greenbiz.

“I generally feel weird about being the one front and center,” he said. “I think sustainability directors often work in environments where politicians take the credit, so we’re comfortable with the work being the face of it.”

Honorees were nominated by readers and selected by the editorial team at GreenBiz, according to the publication.

Jensen is also a member of the advisory council of the Environmentalists of Color organization — a Chicago-based network that seeks to create more pathways into the field of environmentalism for people of color. He is also active in the Urban Sustainability Directors Network. His mother, Kitty Jensen, along with her partner Patty Gehring, is a Yellow Springs resident, as is his sister, LilaRose Jensen, who currently lives with her family in the house in the Vale where she and Kumar grew up. His father is the late Peter Jensen.

*The author is a student intern attending Ohio University.