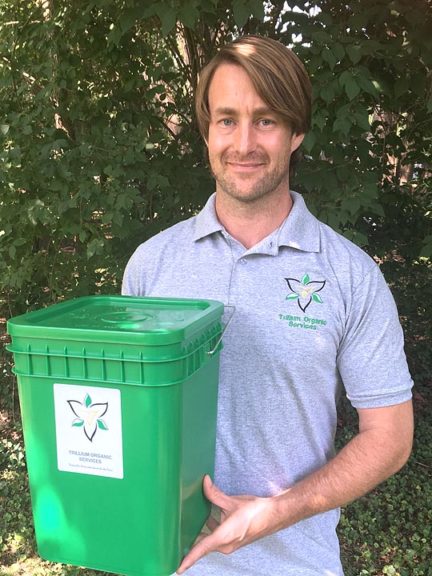 Matthew Lawson is passionate about compost. Where some see stinky, rotting waste, Lawson sees a renewable resource. What is worthless trash to some is, to him, a rich biodiversity.

“When I look at a pile of compost, I don’t just see a bunch of leaves. I see an area as diverse as the Amazon rainforest,” Lawson said in a recent interview.

Lawson is taking his love for organic material and turning it into a business — Trillium Organic Services — which will soon offer curbside composting in Yellow Springs.

For a monthly fee, Trillium will pick up organic waste from local residents at the same time and place as their weekly garbage and recycling pickup.

Upon signing up, Trillium’s customers will receive a four gallon forest green sanitary waste container bearing the company’s logo, as well as a list detailing items that are — and are not — suitable for composting.

The company plans to turn local organic material into a rich natural fertilizer that someday may be available for local households, Lawson explained. The composting site will be just outside the village at the Agraria farm on Dayton-Yellow Springs Road, a portion of which is in the process of getting a permit to host such a site.

Lawson believes Yellow Springs is an ideal home for his environmental business because of what he said is its continued commitment to progressive reform.

Before moving to town to be with his partner eight months ago, Lawson, who grew up in Canada and has both Canadian and American citizenship, read up on the village’s history and found a people willing to do what is best for their community. He is now ready to do his part.

“It’s not just about getting rid of thousands of pounds of waste from landfills, it’s about continuing to put Yellow springs on the map,” Lawson said.

Lawson believes Yellow Springs could become a zero-waste community. If that seems unthinkable, Lawson encourages villagers to remember that, until the 1970s, community recycling did too.

Though he has only lived in Yellow Springs a short time, Lawson is already involved in several environmental efforts. He is on the board of the Yellow Springs Environmental Commission, and was recently elected to serve on the Greene County Soil and Water Conservation District.

Lawson’s interest in the natural world around him began when, as a young boy, he saw how his small farming community in southern Ontario was affected by suburban encroachment. He received a B.S. from the University of Toronto in Environmental Sciences, with a focus on the role microbes play in the environment. Seeking to create positive change in any community in which he lived, Lawson has started community composting initiatives while living in Honduras and Guatemala.

Weekly composting benefits the environment in several different ways, Lawson explained. According to the U.S. Environmental Protection Agency, the average American produces 30 pounds of garbage weekly, roughly 30 percent of which is organic waste. If Yellow Springers produced the same amount of organic waste as the national average, the town would generate more than 33,000 lbs. of organic waste weekly. If all that waste were composted, it could enrich the community’s soil instead of crowding a landfill, Lawson explained.

In aeration composting, the service Trillium Organics Services offers, airflow and water are introduced in a temperature-controlled environment to expedite decomposition. This process allows oxygen and microbes to flourish. Untreated garbage in a landfill, by contrast, releases methane, a greenhouse gas that is 34 times more potent as a heat-trapping gas than carbon dioxide, according to the Intergovernmental Panel on Climate Change. In addition, leachate, a byproduct of rotting waste, carries toxins from landfills into area rivers and streams.

Where landfilling harms the environment, composting replenishes it, producing nutrient-rich soil ideal for crop diversification, according to Lawson. In short, composting makes treasure from what was once trash.

The name of Lawson’s business carries important symbolism, he said. The trillium is the provincial flower of Ontario, where Lawson is originally from, and the state wildflower of Ohio, showing his love for both homes.

Composting is a valued part of environmental conservation in Ontario, and Lawson believes it is going to become increasingly important in the U.S. Composting is mandatory in Canada and parts of Europe, and it will be mandatory in Vermont by 2020.

If Yellow Springs composts its organic waste, it will set an example of commitment to environmental conservation for other communities to follow, Lawson said.

“If there’s a community that will do it, it’s Yellow Springs,” he said.

Lawson hopes to make composting easier for those who have been discouraged by the challenges that come with it, such as attracting rodents or creating an undesirable smell due to using ineffective  methods.

Most importantly, Lawson said, composting could positively affect how villagers relate to their environment and each other.

“When people [use a service like Trillium Organics Services], it gives them a sense of community, and it makes them feel connected,” he said.

Lawson sees “the importance of striving as a better [member of a community], not just as a better individual.” And he hopes his fellow community members will join him.

“Taking the right steps to the future — that’s what a membership [with Trillium Organics Services] is paying for.”

*The author is a writer, performer and Antioch College alumna who lives in Huber Heights. She can be reached at Tworpp@aol.com.