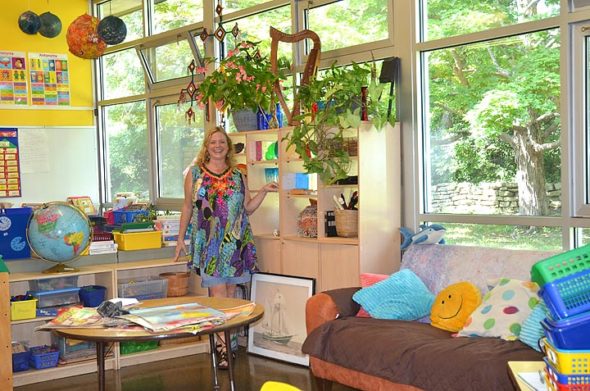 Cathleen Tong, Antioch School’s new Younger Group teacher, has taken advantage of the windows lining her classroom to fill the space with light and color. A framed picture of The Wolf sailing ship, on which she spent 10 years as part of its crew, sits at her feet. (Photo by Carol Simmons)

A burst of activity at the Antioch School early last week, including a succession of deliveries of snacks and other classroom essentials, signaled a new academic year was soon getting underway at the oldest democratic school in the country.

The official start day was Wednesday, Aug. 29, with a staggered opening schedule bringing students in gradually through the next few days.

Most returning students will find their routines much the same as last year, School Manager Nathan Summers said in an interview prior to the opening.

But the Younger Group, the first- through third-grade class, has been greeted by a new teacher.

After five years leading the multi-age classroom, Christine Lipari-Althaus resigned at the end of last school year in anticipation of the birth of her second child this summer.

“I’m very excited about it,” Tong said in a recent interview.

The veteran teacher joins the local school staff after a dozen years teaching in Dayton Public Schools, the last seven at River’s Edge Montessori near the city’s downtown. Before that she taught in Springfield and Xenia.

At River’s Edge, Tong taught a first- through third-grade class for five years, and then followed the group to fourth and fifth grade. She said she values the chance to be with students for multiple years, and she looks forward to continuing to teach with that individual long-term focus.

Nevertheless, Tong anticipates a big change from the inner-city environment with which she is more familiar, noting that she had students from 10 different countries in her class last year, and more than 30 languages were spoken throughout the school. And she’ll miss the relationships she’s developed with students and staff.

At the same time, however, leaving public education for a private school setting is a welcome change in terms of instructional possibilities, Tong said.

“I was a little disillusioned with state testing,” she said. “There are so many things I want to do with my students, and that was hard when the focus was on testing and state scores. Here I’ll have more freedom.”

She said she ascribes to the Antioch School philosophy of letting students’ interests guide their work.

“My motto is ‘follow the child,’” Tong said. “I have a Montessori mind, very hands on,” adding that she also agrees with letting “kids learn at their own pace.”

Nevertheless, she has clear curriculum goals, particularly in reading.

“My opinion is that by the end of third grade they need to be reading,” she said. “It just opens worlds for them, and learning another language does that too,” she added.

Tong, who is bilingual in English and Spanish, said she will be integrating Spanish language instruction throughout the school day.

In addition to the advantages of knowing another language, second-language instruction also has pedagogical benefits, Tong said.

“It just opens their little brains up,” she said. “And they love it.”

‘It’s been a journey’

Originally from Trotwood, in Montgomery County, Tong attended Ohio University, where she majored in child psychology and minored in Spanish.

Graduating from the university in 1986, she got a job as a crew member on a tall sailing ship named the Wolf. She thought she’d give it a year before deciding her next direction.

That year turned into 10 as she sailed around the world with The Wolf.

She eventually moved to Prince Edward Island, where her son, Cayden, now 22, was born.

Tong worked at the Children’s Center and went back to school at Antioch University McGregor (now Midwest) for a graduate degree  and certification in teaching.

“I started teaching in 2002, and I’ve been teaching ever since,” she said.

Her physical move into the Antioch School’s Younger Group classroom this summer was quite an undertaking as well.

“I came with 70 boxes [of instructional materials],” she said. “The hall was full.”

Among them is a framed photograph of her beloved Wolf sailing vessel.

But before she could bring her things into the room, she needed to go through decades of items accumulated by previous teachers and students.

She also did a lot of rearranging of furniture and activity areas. There are no desks.

“It’s such a beautiful space,” she said of the window-lined room that fills with sunlight and makes the outdoors feel present.

Looking around the space, Tong mused that her “years of being in the Montessori School were just getting ready for this.”

Her new class is made up of 12 boys and four girls.

“So they are going to be my little crew,” she said. “I show them the picture of The Wolf on the first day. And I tell them that sailing is just like life. I like to give them that analogy.”

She tells them that they “get to build a community” together, and doing that means they need to help each other, be respectful and learn how to get along with each other.

“You’re teaching them how to be responsible and safe and how to be caring and empathetic.”