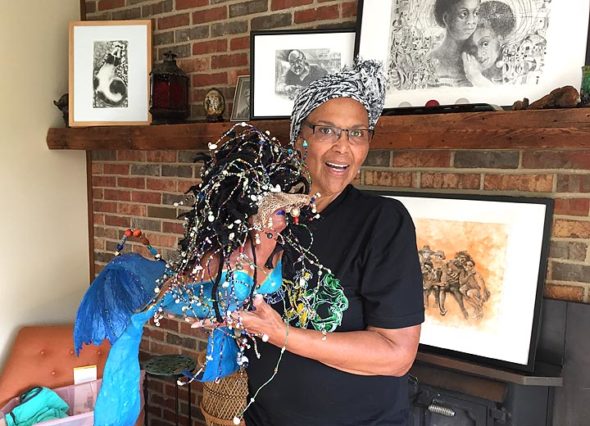 Deborah Dixon with a papier maché sea goddess and other original work in her home studio. (Photo by Carla Steiger)

Curvy, energized, colorful nude women wriggle and writhe joyfully across a black T-shirt that Deborah Dixon designed, and wore, in a recent interview. The figures are named Dance It, Prance It, Stretch It and Strut It and perfectly capture the sense of joy the multifaceted artist takes in full-bodied feminine forms.

For Dixon, creating art with large feminine bodies was part of a long journey of self-acceptance, while her visual work may help others with self-esteem issues as well. Dixon also aids women on the path to self-acceptance at the Antioch Wellness Center, where she helps women strengthen their bodies in the aqua fitness classes she teaches.

A full range of Dixon’s paintings, silk screens, and etchings of women’s bodies will be on display in an upcoming exhibition at the Yellow Springs Arts Council, which opens Sept. 21, with a reception from 6 to 9 p.m. at the gallery, 111 Corry St. It runs through Oct. 14.

Dixon, who lives on a country road in Xenia Township, is a nationally known artist. The show is a retrospective, with images that date from different periods in her life, and include masterfully drawn images of groups of people and the cat she adores, and papier mâché sculpture.

The prints in the exhibition, produced at the Dayton Printmakers Cooperative in recent years, have fine detail and are extremely realistic. Local artist and fellow member of the cooperative, Yellow Springs artist Sharraid Scott, praised Dixon’s work.

“She is a good draftsman, very masterful,” Scott said. “Her works are very well thought out and spontaneous at the same time.”

Dixon, who was born in Springfield, showed her talent for visual art beginning in fifth grade. She began making proficient drawings of famous African Americans such as W.E.B. Dubois and Frederick Douglass in response to a school competition. She had taught herself basic drawing skills from the Walter T. Foster “How To Draw” books, which she purchased for 75 cents apiece. Recognizing her special abilities, a teacher funded a scholarship for her to attend art classes at the Springfield Museum of Art.

While in high school in Cedarville, she continued making art, and gained vocational training in graphic art at what was then called the Greene Vocational School, now the Greene County Career Center. After that, she was admitted to Antioch College in 1978, the first in her family to go to college.

After her time at Antioch College was cut short by financial difficulties, Dixon turned to fashion. The young artist worked for the Brick Shirt House in Dayton, a company that made silkscreened T-shirts. At that time, along with two African-American photographers, she also staged a fashion show of their original designs modeled by local talent. Dixon’s designs were three-dimensional pieces that could be worn.

Being inventive with fashion had become a necessity for Dixon, as it was always a challenge for her to find something to wear. Since the age of three, she had struggled with obesity, and as an adult she lost more htan 200 pounds.

“As I was growing up, the model Twiggy was the rage,” Dixon said. “There was never anyone in the magazines that looked like me.”

“I saw models that looked like me and spoke in a positive manner about living large,” she said. This wakeup call, that big is beautiful, also led her to design her own line of plus-size clothing.

The positive affirmation of large female bodies was a turning point in her art. Prior to this, she had used the slender bodies in the figurative work of Norman Rockwell and Andrew Wyeth as a guide to drawing the human form. Now, she viewed the rounded fleshy women depicted by Peter Paul Rubens and Auguste Renoir with delight and subsequently began to produce paintings and prints of lush, full-bodied women.

“I started to appreciate the fullness of women’s hips and bellies. It was a radical act and it was so needed,” she said.

Dixon feels that her art helps many others as well, according to her artist statement for the YSAC show.

“My art brings big women out of the closet,” it reads. “I draw, paint, and sculpt full-figured females as a way of self-healing and rebellion, as well as to make a social statement that all bodies are amazing, beautiful and a miracle.”

The figures are often in contrapposto pose, with hips and breasts jutting out at a proud angle due to weight being balanced primarily on one foot. She said that she particularly likes the “s” shaped curve of the body that this stance causes, and many of her nudes, which are often traffic-stopping cobalt blue, strike that pose.

To facilitate her work with the human form, for several years, beginning in 2004 when she lived in Yellow Springs, Dixon hosted an open studio in her home on West South College Street with live models. To her, the open studio is a very sacred space.

“What happens between a model and an artist is magical,” she said. “Models are such a gift. It’s my equivalent of going to church.”

Dixon writes in her artist statement that much of the work in the exhibition grew out of a period of instability and pain in her life due to constant moves after her time in Yellow Springs.

Finding beauty in the healing process extends to the care she provides her aquatic students. Since 2014, Dixon has been helping women grow stronger physically by offering six classes, both shallow and deep-water aerobics, at the Antioch College Wellness Center.

Dixon added that although she pushes her students hard, her class is self-adjusting; each person finds their own preferred exercise level.

Dixon’s commitment to her Wellness Center students, as well as her dedication to art, is life-long. It’s all a part of her quest to help women become stronger and more self-accepting.

*Steiger is a local artist and writer.