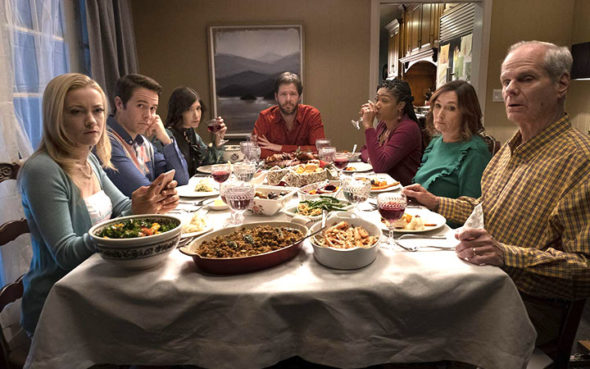 In Ike Barinholtz’s “The Oath,” a politically divided family gathers for Thanksgiving dinner the day before all Americans have been asked — under some duress — to sign the titular oath of loyalty to the United States. As tensions rise around the holiday table, the family is threatened when two federal agents drop by to question Chris (Ike Barinholtz), who is a vocal opponent of The Oath. Clearly enjoying their Thanksgiving meal around the table are, from left: Abbie (Meredith Hagner), Pat (Jon Barinholtz), Alice (Carrie Brownstein), Chris, Kai (Tiffany Haddish), Eleanor (Nora Dunn) and Hank (Chris Ellis). (Submitted photo)

On the day after Thanksgiving — Black Friday — all Americans have been asked to sign a pledge of loyalty to the United States.

This is the central conceit of “The Oath,” a dark comedy/horror/political satire film starring Ike and Jon Barinholtz, and written and directed by Ike. 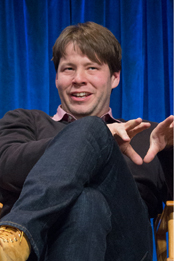 Ike Barinholtz, writer, director and star of dark comedy/horror/political satire film “The Oath,” will present the film at the Little Art Theatre on Oct. 24, with his brother, Jon Barinholtz, who also stars in the film. The two will present a Q&A to accompany the screening, preceded by a wine and hors d’oeuvres hour at the Mills Park Hotel. The event is a fundraiser for the Little Art. (Photo submitted by Dominick Dusseault)

The brothers Barinholtz, whose parents live in the area, are bringing the film to the Little Art Theatre on Wednesday, Oct. 24. A pre-screening reception with the stars is from 6 to 7 p.m. at the Mills Park Hotel and a Q&A follows the film. Tickets are limited, and the proceeds benefit the Little Art Theatre.

“The Oath” takes place during the Thanksgiving holiday, with the liberal Chris (Ike Barinholtz) and his wife, Kai (Tiffany Haddish), hosting his family for the festivities. Pat (Jon Barinholtz) is Chris’ brother, and he and his wife, Abbie (Meredith Hagner), lean to the right in their political sensibilities. The brothers disagree over the signing of The Oath, which is touted by the fictional administration as being non-compulsory, though some detractors have mysteriously gone missing — and Chris is certainly vocal in his opposition. As more family arrive — and the deadline for signing The Oath approaches — the arguments ramp up, until they’re punctuated by the arrival of two federal agents, who show up to put pressure on Chris. 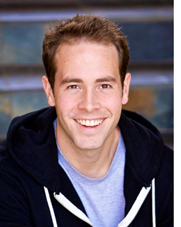 Ike Barinholtz said in an interview with the News last week that the film was inspired by his family’s own Thanksgiving holiday in 2016, right after the presidential election. After Thanksgiving dinner — and some wine — the family’s political talk turned more heated.

“It was really my mom, my brother and I, who I think are the loudest people in our family,” said Barinholtz. “It was getting to that weird place where we were saying things like, ‘It’s your fault!’ Which is a ridiculous thing to say to someone about a presidential election.”

Jon Barinholtz added that their family, on paper, shouldn’t have disagreed in the first place — they all voted for the same person in the 2016 election.

“So we were all on the same side,” said Jon. “We all just had different takes on what had gone wrong.”

Ike said that realizing even his politically aligned family was feeling the heat of discord was a creative epiphany.

“It just kind of put it under the microscope a little bit that the holiday table in America was just blown up … and I just wanted to explore it,” he said. “I just found it odd [that we were arguing] and I knew that it was indicative of other tables, where people were maybe not so aligned — it must have been nuclear.”

The Barinholtzes are familiar with Yellow Springs and its environs — their parents, Alan and Peggy Barinholtz, live on a family farm outside Cedarville, and they’ve been coming to the village since they were kids. Both cited Dark Star Books and Comics as a favorite store — and resident feline, Mr. Eko, as a favorite cat. Jon canvassed for the Democratic Party in Yellow Springs in 2016 — though he noted that “it wasn’t hard convincing people to vote Democrat in Yellow Springs.”

Because of the family’s ties to the area, Alan Barinholtz called up Ike and asked if it might be possible to have a screening at the Little Art.

“I think that’s one of the perks of being a director, especially of an independent film,” said Ike. “If it was, I don’t know, ‘Suicide Squad 2,’ and I had to call Warner Brothers and say like, ‘Hey, a week before it opens it needs to screen in Yellow Springs,’ they might say, ‘Well, that’s not exactly the biggest market.’” Making an independent film means Ike is able to, in his words, “make some of the rules.”

The brothers both attested that, although the film’s subject matter was based on their holiday squabble, their family loved the film and were happy to see them on screen together.

“Although my mom said to me, ‘I know that there were scenes where you were really being mean to Jonny.’ And I’d go, ‘Yeah, but we were acting, you know?’” said Ike. “But like with everything in our careers, they’ve been very, very supportive.”

This isn’t the first time Jon Barinholtz has been directed by his older brother — though “The Oath” marks Ike Barinholtz’s big screen directorial debut, he had previously directed for TV and web series, including one starring his younger brother.

“[The film] was on a whole different scale,” Jon said. “And having him be the director, there was already 35 years of built-in trust. So it was a short cut, it was almost like a cheat — it was a great experience.”

Though “The Oath” does make very opaque allusions to the current presidential administration, Ike stressed that he doesn’t consider the film to be partisan — it’s a satire, and takes pains to show the ways that both liberals and conservatives can fall prey to the 24-hour news cycle and fail to listen to their loved ones. To that end, Ike thinks that folks of all political stripes should commit to continuing to engage in conversation with their families and friends if it’s safe for them to do so, even when it might be difficult.

“A lot of people say, ‘Don’t talk about politics.’ But I think we should! We have to now,” he said. “If we simply refuse to have these conversations … what happens is — we’re all in a bubble now, and that’s not going to change — but we’ll make the bubble smaller and harder to penetrate. … [Y}ou don’t have to do a whole lot of reading of history to realize that’s when really bad things start to happen.”

Jon hopes that movie-goers will feel emboldened to have these conversations after seeing the movie.

“If people are able to go in and maybe be seated by someone on the other side of the aisle, and see that some of the things we’re saying may be different — but the attitude and the anger behind it is very similar,” he said.

Ike agrees: “My ideal person who sees this movie walks out and says, ‘Oh man, that was funny. And it was kind of scary. And I should call my brother.’”

“The Oath” will screen at the Little Art Theatre on Wednesday, Oct. 24. The evening will begin with hors d’oeuvres from 6 to 7 p.m. at the Mills Park Hotel, followed by a screening and Q&A with Ike and Jon Barinholtz. Tickets are limited — the cost for the event is $40, with proceeds to benefit the Little Art. Visit http://www.littleart.com for more information.