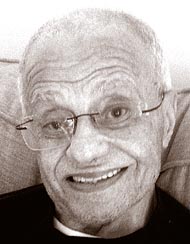 The story of John B. Christian is one of our nation’s most hidden treasures. Like so many distinguished African Americans, his story and accomplishments are mostly unknown, but without his intellect, perseverance and innovation, many of our nation’s greatest achievements, such as space travel, landing on the moon, and protecting the lives of so many military personnel in the Vietnam War, would never have been possible.

John was born in 1927 to Susie Mae Martin Christian and Oscar Christian. He was raised by his mother and grandmother, Jimmie Lou Brooks Martin, on a farm three miles from Marietta, Ga.

John lived with his grandmother until she passed away when he was 7 years old. He then moved to Harlan, Ky., to live with his mother’s sister, Pearl, and her husband, Horace Dutton, until he was 10 years old, and then moved to Louisville, Ky., with his mother, aunt Pearl and uncle Horace. He was enrolled in St. Augustine Elementary School and then St. Augustine High School, graduating with honors in June 1945.

When John turned 18, he was drafted into the Navy during World War II. At the close of the war, John was released from active duty with an honorable discharge in 1946. John attended the University of Louisville under the GI Bill and obtained a Bachelor of Science degree in chemistry in 1950, graduating with honors. He was awarded membership in the Beta Kappa Chi National Honorary Scientific Society in 1950. John also became a member of the Alpha Phi Alpha fraternity and remained an active member throughout his life.

Soon after graduation, the United States engaged in the Korean War, and John, at the age of 23, was drafted again, this time in the Army. John quickly advanced from Private to Corporal. As a distinguished soldier receiving battlefield commission and honors — two Bronze Stars, the Purple Heart and the United States Service Medal — the Army “offered” to promote John to Lieutenant. John was not interested in the military as a career, preferring to pursue a path in the private sector as a chemist. So, John was honorably discharged in 1956.

John moved to Indiana where he was hired by the Pillsbury Company, but they rescinded their offer because employees did not want to work with a man of color. Not deterred, John landed a job three days later with the DuPont company and then was hired by the US Navy in Washington, D.C. John was first recruited to work on formulations for explosives. His formulations had tremendous stability and less sensitivity to physical shocks and heat, making them relatively safe to handle and easily molded into any desired shape, helping direct the explosion. Originally developed for demolition, these explosives were also used in the military and have yet to be rivaled, even today.

Recognized for his work, John was offered a transfer to the Materials Research Laboratory at Wright-Patterson Air Force Base in Dayton, Ohio. John had a distinguished career as a materials research engineer, inventing and patenting lubricants for military and space aircraft and equipment.

Some of John’s greases were used as a replacement to the more viscous oils that leaked from shot-out helicopter fuel lines, saving countless U.S. military lives in the Vietnam War. Igor Sikorsky, the founder of Sikorsky Aircraft, was so impressed that he insisted on meeting the young man who “dared to put grease in my helicopters.” John not only met Igor Sikorsky, but he also forged a long-lasting relationship with him and Sikorsky Aircraft over the years.

John created other innovative lubricants for NASA that could sustain wide temperature ranges from -50°F to 600°F, allowing the astronauts to carry environmental control systems in their backpacks, and the moving parts of the moon buggy and missiles to operate in the extreme temperatures of space and the moon’s surface.

John also developed lubricants to increase the life of jet engines such as the F-15 Eagle and the F-4 Phantom, allowing them to reach incredible speeds. These lubricants were so powerful and resilient that only a small amount was required, outlasting the life of the jet itself and saving the military millions.

For his innovations, John was awarded the first Robert T. Schwartz Award of the Materials Research Lab. Mr. Schwartz held John in high esteem, recognizing his talents, integrity, confidence and positive attitude. He also recognized that John always stood up for himself and others throughout his career.

John received many other awards and certifications. In 1965, he received a certificate for the Eighth Annual Space Technology Institute at the University of Connecticut. In 1966, he received certification from the University of California, Los Angeles, (UCLA) for Advanced Bearing Technology and multiple scientific and management courses and awards of achievement from Wright-Patterson Air Force Base and the United States Air Force. John also received awards and certificates for over 50 patents and new inventions created for the U.S. Air Force. He was inducted into “Who’s Who in Science and Technology” and was elected as a member of the prestigious New York Academy of Sciences in April 1964, an honor bestowed to only the top scientists of the world, by invitation only. John traveled extensively, speaking at scientific conferences on behalf of the U.S. government, presenting his developments in fluorocarbon ethers, fluorine-containing benzimidazoles and perfluoroalkyl ether substituted phenyl phosphines.

Upon retirement from Wright-Patt in 1984, John created Aerospace Lubricants, Inc., or ALI. At ALI, his patented lubricants were developed for additional military and commercial use.

John then started another company, Lubrication Technology, Inc. in Jackson, Ohio, and finally retired for good in 2010.

When John moved to the Dayton area in 1956, he discovered Yellow Springs. Intrigued by the liberal lifestyle and the more accepting attitudes toward people of color, John made it a point to visit often on weekends, enjoying a beer at the Ye Olde Trail Tavern with the locals. He aspired to one day live in this small town known for its friendly community, arts and “hippie” lifestyle. After meeting the love of his life, Cynthia Wilson, John proposed, and they were wed on June 6, 1959. They lived in Dayton and subsequently moved to Yellow Springs in 1962, where they resided on Omar Circle for 54 years. John and Cynthia have two children, Martin Antony Christian (Marty) and Carolyn Christine Christian Bass. They also have two grandsons, Larry D. Johnson II, and Christian Joseph Johnson.

John lived with no regrets. Although he was raised in humble beginnings and experienced the perils of war and enduring racism, he was never deterred from striving for the best. He always focused on the positives: the loving family, friends, colleagues and educators who supported him throughout his life and career. John lived out his dreams, achieving the life he always wanted. He loved music, mostly jazz, swing and R&B, collecting autographs of noted artists like Nat King Cole, Ella Fitzgerald and dancers like the famed Nicholas brothers.

Gardening was his thing, too. His yard was a neighborhood icon, growing beautiful rose bushes and tending multiple grape-vines that produced fabulous jellies his mother made or tempting, potent wines. He was also known to concoct some killer home brew. Cooking was another passion and Christmas just wasn’t Christmas without his brandy-soaked fruitcakes.

Traveling was also a passion. John and Cynthia traveled extensively throughout the U.S. and the world. They were always up for a cruise to some exotic or historic destination and they rarely missed their favorite Christmas holiday trip to New York City to catch a play and the world famous Rockettes, with a side of cheesecake.

John and Cynthia instilled in their children tremendous values, including a pride in themselves, their heritage and family, with an attitude that they could do anything with determination and hard work. John valued his family and always took time to attend every play, concert, school event and ball game, paying close attention to their progress in school and spending countless weekends at fun events in YS and the surrounding communities — something they will always remember and cherish.

Without John Christian, the world would certainly have been a much different place and life just wouldn’t be the same for family and friends who respected, loved and valued his friendship and advice.

John passed away in the comfort of his home in South Weymouth, Mass., succumbing to Alzheimer’s disease and pancreatic cancer. He will be greatly missed by his wife, Cynthia; son, Marty, and daughter-in-law, Linda; daughter, Carolyn, and son-in-law, Darrel Bass; grandsons Larry (Dee) and Christian (CJ); sister-in-law Gloria Merritt; niece Mimi Merritt and nephews, Ralph Merritt Jr. and Remley Merritt; especially loved cousins Frank and Debbie Durham; and countless other relatives and friends.

John’s final wish was to come “home” to the second love of his life — Yellow Springs (the first, of course, was Cynthia!). A memorial service will be held at St. Paul Catholic Church at 308 Philips Street on Saturday, Oct. 27, at 11 a.m., with Deacon Paul Richardson and Pastor Sherri Blackwell presiding. The service is open to anyone who would like to pay their respects and say a fond farewell.

In lieu of flowers, we ask that donations be made to VNA Hospice and Palliative Care (giving@vnacare.org), that were wonderful and instrumental in helping Cynthia, Marty, Linda and Carolyn keep John home, surrounded by family and friends. Donations may also be made to the Wounded Warrior Project to support other veterans who fought for our country and who continue to need our love and support.