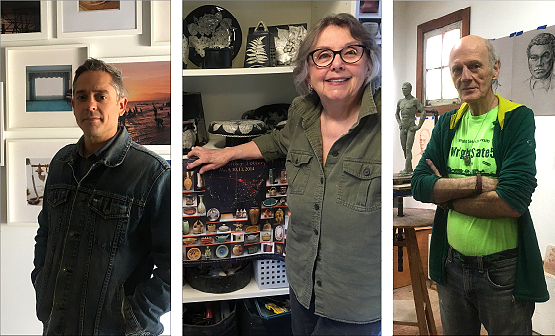 A few of the 29 local artists opening their studios for a villagewide gallery sale this weekend are, from left, photographer Matthew Collins, potter Dianne Collinson and sculptor Brian Maughan. (Photos by Jeff Simons)

YS Open Studios — An inside look at local art and artists

Towns like Taos in New Mexico, Marfa in Texas, and New Bedford in Massachusetts have long been known as meccas for painters, writers and musicians.

But Yellow Springs is increasingly becoming renowned for its own vibrant community of artists.

This coming weekend, art lovers can get a first-hand look at what some of the village’s talented artists are creating.

During the annual YS Open Studios event, 29 Yellow Springs artists at 17 locations will open their doors to the public. The annual event is Saturday and Sunday, Oct. 20–21, from 10 a.m. to 5 p.m.

Over two days, visitors will see a broad spectrum of local art that includes paintings, sculptures, photographs and weavings, as well as wood, glass, and ceramic pieces. 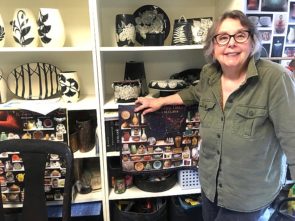 “This will be an opportunity for people to get into artists’ studios, meet them, and see firsthand how they work and how they create,” said Dianne Collinson, a potter and one of the five organizers of this year’s event. The other four organizers are Yellow Springs artists Kathy Moulton, Sara Gray and Nancy Mellon and Karen Wintrow of the Yellow Springs Chamber of Commerce.

Collinson, who first came to Yellow Springs in 1997 to work at the Antioch School, took up pottery a decade ago.

During the two-day event visitors, using a map or an interactive online version of one, can go from one studio to the next, identified by numbers, yard signs and yellow balloons. The maps provide a description of each artist’s work and location, and can be followed in numerical sequence or by category.

“You can organize your tour by certain groups,” Collinson said. “If you’re interested in, say, just pottery, you can pull that up on your smartphone or your computer and find all the pottery studios. Or, if you were just interested in painting you could find all the people who do two-dimensional art. You can plan your own tour. It’s quite interactive. You don’t have to go to every studio.”

Collinson said that a lot of people were interested in the Open Studios tour because they missed the artists’ studio tour that Lisa Goldberg had organized for many years.

“This year’s tour was organized on a grassroots level,” Collinson explained. “Anybody who wanted to participate in the tour was welcome to take part. If you’re a local artist and you wanted to invite people to your studio, this was a good time to do it.”

This year will be the third year of the YS Open Studios tour. 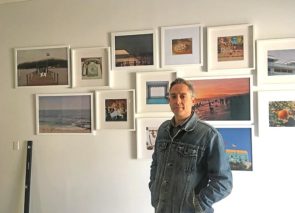 Matthew Collins has opened up his studio on Cliff Street for this year’s event. A professional photographer for 18 years, Collins grew up in Perrysburg and graduated from the University of Cincinnati in 2000 with a B.F.A. from the College of Design, Architecture, Art and Planning. He and his family —he’s married to Yellow Springs native Corrie Van Ausdal — moved to Yellow Springs from Kansas City, Mo., in 2013. His specialty is commercial and editorial portraiture.

Collins also has an impressive collection of landscape and cityscape photos, along with close-up shots of people from across the country. Those photos will be on display — and for sale — during the weekend tour. 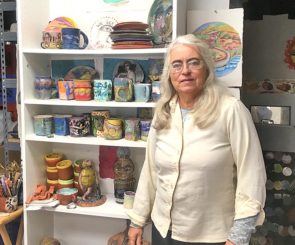 Local artist Beth Holyoke will be showing a collection of ceramic pieces for this year’s tour, including a combination of functional pieces and a continuation of her “Refugee Series.”

Holyoke’s series on refugees was inspired by her recent experiences in Greece. During the summers of 2017 and 2018 Holyoke traveled to Lesbos, an island in the Aegean Sea off the coast of Turkey, the site of overcrowded refugee camps. Over the past several years, the people of Lesbos have organized a humanitarian relief effort to provide sanctuary for thousands of asylum seekers who have fled war and oppression in Syria, Iraq, and Afghanistan. 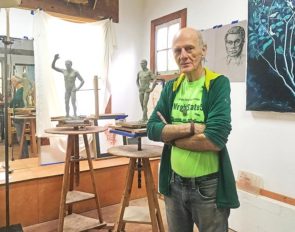 Brian Maughan, a world renowned sculptor, has lived in Yellow Springs since 2007. He graduated from the San Francisco Art Institute in the early 1960s and moved to New York City in 1968. He lived in Manhattan and produced commissioned sculptures for the next two decades.

“Back then there were a lot of empty warehouses — the site of the old garment district — so it was a good place to work,” he said. To make ends meet he also worked in construction.

Over the years Maughan has completed and installed bronze sculptures of baseball legends Hank Aaron, Bob Uecker, and Bud Selig in Miller Park in Milwaukee, Wis.

He is currently working on a project to create and install a life-sized bronze sculpture of Wheeling Gaunt, who moved to Yellow Springs with his family in the early 1860s. The philanthropist, who was born into slavery on a tobacco plantation in Kentucky, overcame years of adversity to become a wealthy black abolitionist and major supporter of Wilberforce University. Gaunt Park was created from land he donated and is named after him. Discussions have begun about where to install the sculpture, with a leading suggestion to place it near the Yellow Springs train station downtown.

During a recent visit to his studio on Cliff Street, Maughan talked about the prototypes he’s working on for the Gaunt project.

“These little figures are the beginnings,” Maughan said. “They’re anatomical, little studies to figure what position, what posture he might be in.”

Maughan added that when complete, the sculpture of Gaunt will be dressed in period clothing, and the installation will include an inspiring quote from Gaunt: “Not what we have, but what we share.”

When Maughan’s wife, Marie Hertzler, accepted a teaching position at Wright State University 11 years ago, Maughan was a little skeptical about leaving the Big Apple and moving to Ohio.

“I assumed we’d be living in Dayton, but somebody suggested Yellow Springs—basically a little farm village,” he said.

But it didn’t take long for Maughan to realize he’d moved to an unusual and extraordinary community.

“This place seems a little like a New York City neighborhood,” he said. “They’re very compact. You know the grocery store, the restaurant people, everybody. In that way Yellow Springs reminds me of New York.”

Tour maps, created by event sponsor Bing Design, are available at the Yellow Springs train station and several stores and restaurants throughout town, including two other sponsors, the Winds Cafe and Yellow Springs Brewery. An online interactive map can be accessed at ysopen studios.ysartscouncil.org.

* Jeff Simons is a local writer.