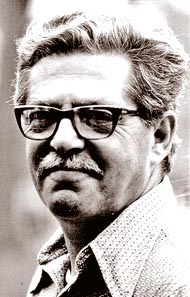 Marv was born Aug. 13, 1927, in Philadelphia, Pa., to Anna and David Lamborg. Throughout his school years, he was active in the Boy Scouts, enjoying extensive hiking, camping and working on Eagle Scout projects. During high school summers, he worked at the Philadelphia Naval Shipyard, and upon graduation, joined the Navy and set off for the Naval Training Center in Bainbridge, Md. Two years later came the opportunity for a college degree, courtesy of the Navy. He liked to tell the story that, in checking out the Naval Academy in Annapolis, he watched cadets frogmarching around a track and quickly chose the University of Rochester. Four years later, he graduated with a degree in chemistry and the title of Ensign.

To finish his commitment, he traveled to Boston to join the crew of the recently recommissioned destroyer, U.S.S. Cushing, on which he would spend the next three years of his life. This ship was part of the Atlantic Fleet serving UN forces around the world, but never itself coming under direct fire. Marv loved the Navy and, now a Lieutenant JG and experienced navigator, he was tempted to make it his career, but instead decided to resign and head to Johns Hopkins University in Baltimore to work in the lab of biochemist Nate Kaplan. At the same time, he began the course work required for a Ph.D. While there, he met his wife, Mary Frech, a Baltimorean. In 1956, they moved to Boston, where Marv completed the final pieces of his dissertation and started work on a post-doctoral fellowship in the Mass General Hospital lab of Paul Zamecnik. During those years, he also worked for Harvard College as a tutor for undergrads in biochemistry. In 1958 and 1963, his two children were born in Boston area hospitals.

A past Johns Hopkins colleague, Tony San Pietro, was now working at the Kettering Lab in Yellow Springs, and encouraged Marv to join the lab’s newly formed cell differentiation program. Marv and family moved to Yellow Springs in 1965 and during his many years at the Kettering Lab, he acted as the Mission Manager for the scientists, including himself, who were working on nitrogen fixation and various aspects related to the enhancement of plant production. Collaborative research with scientists in India and Russia led to numerous trips abroad. From time to time, Marv also worked as an Antioch College adjunct professor teaching a course in biochemistry.

The Kettering Foundation began to move its focus away from scientific research and finally stopped its financial support of the Yellow Springs lab, turning over management to the Battelle Institute in Columbus in 1984. A few years later, the building on the corner of Limestone and East South College streets was given to Antioch University. At that time, Marv began a long and happy retirement. For a short while, he did field work across the American West for his daughter’s environmental consulting firm, Dames and Moore. His lab was set up in a trailer that moved from site to site. He enjoyed the young roustabouts working on the cleanup, and they enjoyed him, because of — or in spite of — their differences in ages and backgrounds. His interest in birds took them to Arizona, where he and Mary bought a villa in the community of Green Valley, which became their home for six months of the year from ages 65 to 75. They both enjoyed traveling and made at least one trip every year to Europe, Africa and elsewhere. In 2013, they sold their house on Meadow Lane and moved into a newly built independent living duplex at the Friends Care Community in Yellow Springs.

Marv leaves behind his wife, Mary, and a small but close group of family members: his daughter, Amy (Jon Ralinovsky), of Oxford, Ohio; his son, Carl (Phoebe Lam), of Santa Cruz, Calif.; his sister, Bernice Balis, of Lantana, Fla.; his two nieces, Ellen Balis (Doug McCleod), of Berkeley, Calif., and Andi Balis (George Harris) and their children, Jessie and Sophie, of New York, N.Y. On Mary’s side, he leaves her brother, Bryant Frech, and his wife, Charlotte, of Chapel Hill, N.C., with whom Marv and his family spent many wonderful vacations on Bald Head Island, N.C., and together on trips abroad.

Marv will be remembered for his great sense of humor and big-hearted approach to friends and life in general. A future date will be announced for a chance to gather at his home and lift glasses in memory of a good and gentle man and steadfast friend.