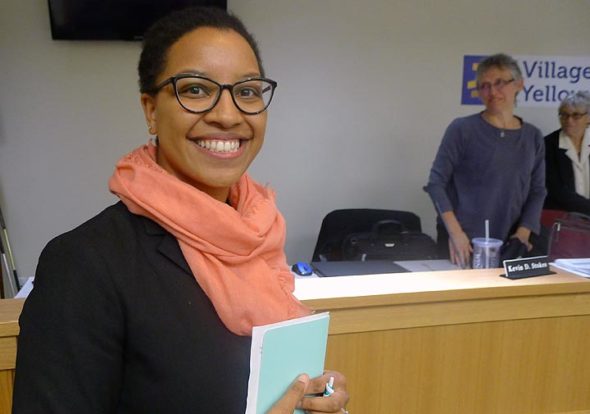 Kineta Sanford has been appointed to fill the vacant seat on Village Council. Council approved the 26-year-old villager in a 5-0 vote at its Nov. 19  meeting.

Sanford fills the seat vacated by Judith Hempfling, who announced her resignation in September citing personal reasons. Sanford will serve through 2019, when Hempfling’s term was set to expire.

An election for the seat will be held in November 2019. Two other other Council seats will be up for re-election at that time.

In an interview after the meeting, Sanford said she was excited for the opportunity and honored that she was chosen from a group of “very qualified candidates.”

“I knew whoever walked into the seat would do a great job,” Sanford said.

Sanford said she hopes to be an “access point” for young people discouraged by the political process.

“Having their voices here — that would be a game changer,” Sanford said.

Sanford, who grew up in Xenia, moved to the village with her husband and young daughter last spring. She’s had a long relationship with Yellow Springs through her mother, Cindy Sanford, a longtime employee of the YS Credit Union and former board member of Home, Inc., and her father, Greg Sanford, who worked at Vernay Labs.

Sanford currently works for Home, Inc. as an AmeriCorps VISTA employee writing grants for affordable housing projects, a position she started in the summer.

Council President Brian Housh said that Sanford was chosen in part because she represented a similar constituency to that of Council member Hempfling. Other factors include Sanford’s desire to engage young people and “making sure that we remain a diverse body and that those different perspectives are brought into our decisions,” Housh said.

The other candidates who applied for the vacancy were Gerry Simms, Dan Reyes,  Dino Pallotta, Andrea Carr and Leo Brandon.

The vote took place after Council deliberated in an executive session.

Read the Nov. 22 issue of the News for the full story.