Home, Inc. leaders recently presented plans and designs for their proposed 54-unit senior affordable rental housing project, to be located between East Marshall and East Herman streets and across from Friends Care Community. If funding comes through for the project, those 55 and older whose income is up to 60 percent of area median income, or about $27,000 for a single person, will be eligible to rent an apartment. (Rendering courtesy of Home, Inc.)

A significant senior affordable rental project more than 10 years in the making is moving forward, according to Home, Inc. leaders at a recent community meeting.

“A safe community setting with support services, ease of living, accessibility and affordability will have a significant impact on the lives of seniors in our community, who have very few options today,” Home, Inc. Executive Director Emily Seibel wrote in an email this week.

Home, Inc., along with development partner St. Mary Development Corporation of Dayton, or SMDC, hopes to construct a 56,000-square-foot building with 54 apartments on 1.8 acres at the site of the former Wright State University medical clinic on Xenia Avenue. The building would be situated at the rear of the property, behind the proposed new fire station and across the street from Friends Care Community. The total cost of the project is estimated at $9 million.

Seibel, along with SMDC President Tim Bete and architect Rob Humason, spoke at a public meeting of about 40 people at Friends Care Community on Tuesday, October 9.

The scope of the project is significantly larger than any previously built by Home, Inc, according to Home, Inc. Board President Chris Bongorno in his introduction.

“Our strategic plan is to increase the scale of the services and homes we offer to the community,” Bongorno said. “This project is the epitome of that.”

The main reason for the project’s scope is community need, according to Home, Inc. leaders.

“There is a senior housing crisis in Yellow Springs — particularly in affordable, accessible, community-oriented housing that meets the needs of seniors,” Seibel wrote in an email. “We have listened for years through focus groups, public meetings, a survey and the phone calls we get each week. We know firsthand that many seniors are struggling with housing cost and accessibility in the village.”

According to Seibel, the nonprofit has more than 100 people on a list of those interested in a current Home, Inc. senior rental project on Dayton St., which includes only six apartments.

The need for more affordable senior housing in town was stated last year in the Village Council-commissioned Housing Needs Assessment, a four-month study conducted by Bowen National Research from Columbus. While the study concluded that Yellow Springs could use a variety of new housing options, the need is most acute in affordable rentals, according to Bowen President Patrick Bowen in a January 2018 presentation to Council. And because those older than 55 is the fastest growing demographic in town, the need for senior rentals is pressing, he said.

As a member of the Senior Housing Working Group, Suzanne Patterson is also convinced of the need for affordable senior rentals, having studied the housing needs of local seniors for almost a decade.

“I’m encouraged,” she said. “I think this project will be easy to fill.”

A second driver for the scope of the project is the requirements of the project’s proposed funding source, which is the Low Income Housing Tax Credit program. The federal program, which funds about 90 percent of all affordable housing projects in this country, is administered by the Ohio Housing Finance Agency, which prioritizes projects that have 54 units or more. Because the funding process is highly competitive and the need for affordable rentals is obvious in the village, it made sense to aim for a 54-unit project, SMDC President Tim Bete said.

While the final rental costs of the proposed project are not yet clear, most often affordable projects offer rents that are 20 to 40 percent below the local market rate, Bete said. The project will include 650-square-foot one-bedroom apartments and 850-square-foot two-bedroom units. Potential renters will mainly be those 55 and older who make up to 60 percent of area median income, or AMI, or about $27,600 for a single person or $31,000 for a couple, although a portion may be those who make up to 80 percent of AMI, Bete said at the meeting.

Home, Inc. is pleased to be partnering with SMDC, a Dayton faith-based nonprofit, according to Seibel this week. The company has completed more than 60 affordable apartment communities in nine states, and, as well as bringing expertise to the project, also brings a mission similar to that of Home, Inc., Seibel said.

“We wanted to work with a development partner who had the experience and capacity, but who was also mission-aligned,” Seibel wrote. “They have proven to be flexible, open-minded and responsive. They are teaching us a lot and helping to build our capacity for larger projects in the process.”

Listening to stakeholders
At the Oct. 9 meeting, project leaders unveiled the footprint and building design for the project.

Many aspects of the building were influenced by “listening sessions” held by project leaders with neighbors and local elders, according to architect Humason. There were 16 such sessions held over last summer, according to Seibel, and the final design was strongly influenced by the input of stakeholders.

“We’re confident that what we’re presenting today reflects this input,” Seibel said at the meeting.

For instance, when asked to choose between a three-story building and less greenspace or a four-story building with more, stakeholders chose a higher building and more greenspace, Humason said. Consequently, the final design includes greenspace with gardens and a pollinator path on the east side of the building, with parking limited to the west side, between the apartment building and the fire station.

And because the building is in a residential neighborhood, designers worked to create a building with residential characteristics, such as a variety of textural materials and varying heights, also in response to the desires of stakeholders.

“We spent a lot of time trying to “un-box” this and make it attractive,” Humason said. “I think we’ll end up with a very attractive building.”

A building manager will be on site for 40 hours per week, and some social services will be available to residents, according to Bete.

The building will also adhere to all state standards for environmental sustainability, according to Bete.

“Every part of the building is green,” he said.

According to Humason, the interior of the building has not yet been designed. And while the building will likely contain some common space for residents, the specifics will only be decided after input from residents.

“When we get there, we want the local community and residents to drive that conversation,” he said.

The site itself was the preferred spot for a senior apartment building chosen by the Senior Housing Working Group, made up of local elders and volunteers, who selected it as the most attractive of all available local sites.

The main attraction of the site is its walkability, according to Suzanne Patterson, the contact person for the group. The site is within walking distance to the Antioch College Wellness Center, the library and downtown, and is also on the Greene CATS bus line.

The proposed building site is “one of the best sites I’ve ever seen” out of the 60 projects he’s worked on, according to Bete, who also highlighted walkability as the main attraction.

“The walkability of Yellow Springs is exceptional,” he said, stating that when seniors can walk to their destinations, it keeps them both more engaged with their community, and more fit.

“That partnership is essential,” she said, stating that apartment residents may choose to volunteer at the nursing home, or that the two groups may engage in projects or trips together.
10 years in the making

The senior affordable rental housing project is the culmination of an effort that began in 2005, according to Seibel. At that time, Home, Inc. and local seniors attempted to launch a 33-apartment project on the Barr property downtown, the site of the current Mills Park Hotel. However, that project stalled when Home, Inc. did not receive the funding sought for the project.

At that point the Senior Housing Working Group began meeting to explore other housing options for seniors. After the former Wright State clinic site was identified as the preferred site, Home, Inc. in 2014 began conversations with Wright State University, which then owned the site. The local nonprofit stated its interest in buying the land to the WSU board of directors, although it was not then for sale. Several years later, after WSU sold the two acres of land fronting Xenia Avenue to Miami Township Trustees for the new fire station, Home, Inc. was able to purchase the remaining 1.8 acres through financing from the Morgan Family Foundation.

“We were unflagging in our interest and gained control of the site,” Seibel said at the meeting.

In the question segment of the meeting, several neighbors raised questions about possible light pollution from the project.

Addressing light spillage is a part of any project that adheres to state sustainability standards, according to Humason. While some lighting for residents’ safety will be necessary outside the building, lower light can be used on the eastern, non-parking side of the building, he said. And the project will likely be using LED lighting, which offers more flexibility than traditional lighting.

Regarding drainage, a swale will be constructed on the southeast corner of the property that will capture rainwater that runs off the building and the asphalt of the parking lot, he said.

A concern about the size of the project was expressed by area neighbor Laura Curliss.“It’s an urban-scale project in a village,” she said.

According to Village planning documents, the four-story structure will be 56 feet tall. The size is necessary, however, given the needs of the community, according to Seibel.

“At first 54 apartments seems like a shock, but the site accommodates it, and the need is there,” she said.

In response to a question regarding whether organizers have a way to limit the project residents to those with a connection to Yellow Springs, Bete said that while there is no official mechanism for doing so, his experience suggests that people interested in the project will be those who already live here, who have relatives here or who used to live here.

“Usually people want to live where they already are, or where they have memories,” he said.

While project organizers will attempt to have the project be racially and ethnically diverse, “most people will have a connection to Yellow Springs,” Seibel said.

This fall, the Yellow Springs Planning Commission will address Home, Inc.’s request for Planned Unit Development, or PUD, zoning for the project. The application for the project’s Low Income Housing Tax Credit funding will be submitted to the OHFA in February 2019, with notification of the funding decision in May.

If funding is granted, the project will break ground in the spring of 2020, and construction will take about 18 months, according to Bete. 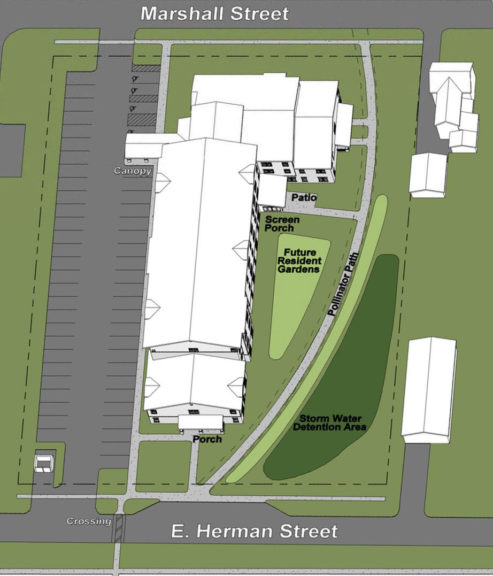 Shown above is the site plan for the Home Inc. proposed 54-unit senior affordable rental project, located on 1.8 acres between East Marshall and Herman streets, behind the new fire station and across the street from Friends Care Community. Parking will be limited to the west side of the building, while the east side will offer green space, including gardens and a pollinator path. (Rendering courtesy of Home, Inc.)