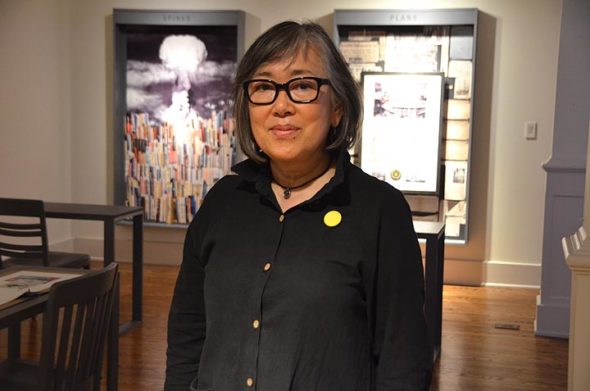 Installations by locally based artist Migiwa Orimo (above) are featured in “Nuclear Fallout: The Bomb in Three Archives,” an exhibition on view this fall at Antioch’s Herndon gallery that closes Friday, Dec. 7, with a 7 p.m. talk by Tanya Maus, director of the Peace Resource Center at Wilmington College. (Photo by Megan Bachman)

“Nuclear Fallout: The Bomb in Three Archives with Kei Ito and Migiwa Orimo,” an exhibition on display this fall at Antioch College’s Herndon Gallery, will close Friday, Dec. 7, with a lecture from 7 to 8:30 p.m. by Tanya Maus, director of the Peace Resource Center at Wilmington College.

Maus’ talk is titled “When We Say Pearl Harbor: A Response to the Poetry of Sadako Kurihara,”

In her lecture, Maus will reflect upon the meaning of Hiroshima and Pearl Harbor by examining Japanese poet Sadako Kurihara’s critique of the literary and political cultures of post-war Hiroshima, Japan. Admission is free.

The exhibition, which features installations by Japanese-American artists Kei Ito and locally based Migiwa Orimo, excavates the collective memory of the effects and aftermath of nuclear war. An interdisciplinary collaboration, the show re-examines archival slides, photographs, 16mm films, objects and documents from three markedly different archives: the U.S. National Archives, the Hiroshima and Nagasaki Memorial Collection of the Wilmington College Peace Resource Center and the National Museum of the United States Air Force.

According to organizers, the exhibit asks viewers to critically consider the way war is curated in our cultural telling — asking who creates the narrative, whose stories are missing and who is no longer alive to tell it.