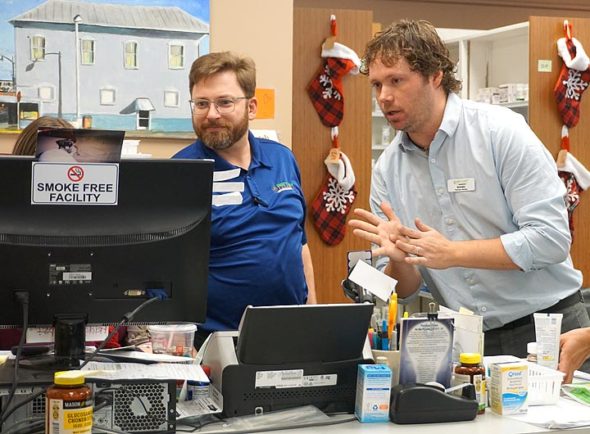 The village’s longtime lone pharmacy, Town Drug, is getting a new owner.

The drug store’s manager and lead pharmacist Amy Kelly confirmed this week that Benzer Pharmacy, based in Florida, is in the process of purchasing the local business from the Springboro, Ohio-based REM Corporation, which acquired Town Drug in 2007.

Kelly said the sale, which includes several other area community pharmacies  also owned by REM, should be complete within the next two to three weeks.

Kelly, who came to Town Drug after the retirement of Janice Blandford in August (see profile on page 8), said she didn’t anticipate the change in ownership to have much of an effect on the store’s day-to-day operations.

And she doesn’t expect customers to see any notable differences.

“Basically, it changes who pays the bills,” she said on Monday of the sale.

Although Town Drug has had corporate ownership for more than a decade, the drug store is still considered a community pharmacy in its focus on local needs, Kelly said.

It has “a focus on doing what’s right for the community and our patients, not making a buck,” she said. “We’re not trying to meet a flu shot quota,” for example, she added.

Benzer Pharmacy, founded in 2009 and formerly known as Rx Care Pharmacy, is a privately owned company based in Tampa, Fla. Last year, the chain owned about 65 drug stores across the country, up from about 40 locations two years prior, according to company records.

According to industry reports, the company has been making new acquisitions steadily for several years as it continues to expand in a market dominated by such behemoths as CVS, Walgreens and Rite Aid. But although the largest 15 chains in the U.S. together accounted for three-fourths of the dispensing revenues in the country last year, according to the most recent annual report by industry monitor Drug Channels Institute, the number of community pharmacies is still rising. A study last year funded by the National Institutes of Health found that the number of community pharmacies increased by 6.3 percent from 63,742 in 2007 to 67,753 in 2015.

The study concluded that small “retail chains and independent pharmacies persistently accounted for 40 percent and 35 percent of all pharmacies, respectively, while the remainder were comprised of mass retailers (12 percent), food stores (10 percent) clinic based (3 percent) or government pharmacies (less than 1 percent).”

Amid that backdrop, the local pharmacy at the corner of Glen Street and Xenia Avenue has had relatively few owners and head pharmacists since its beginnings nearly 100 years ago.

That legacy began with A.C. Erbaugh, a druggist in Dayton for 30 years who came to Yellow Springs in May 1924 to buy what was then the Whittaker Drug Store, located where Glen Garden Gifts is now.

Within a few years of operation, Erbaugh and his wife were joined in the store by their son, William, who obtained his own pharmacy degree in 1929. The store, renamed Erbaugh Drug Store, then moved down the street to its longtime corner location that same year.

William, henceforth affectionately known in town as “Doc,” soon assumed   leadership of the enterprise from his parents, continuing in that role until the 1950s.

According to past News accounts, Doc remodeled the store “to better fit his needs,” putting in a soda fountain and repositioning the front door at the side corner, where it remains.

He was “remembered as being a very thin, short, wiry sort of man who dispensed drugs based on his own education, and who ‘went 90 miles an hour’ while working at his job.”

Thinking about his eventual retirement, Erbaugh brought fellow pharmacist Albert “Bud” Johnson into the business in 1951, and the name expanded to Erbaugh and Johnson’s, remaining so for the next 45 years.

When Erbaugh actually retired in 1968, Bud’s younger brother, Carl Johnson, came on board as a second pharmacist. And Carl and his wife, Sue, then went on to run the pharmacy and store for another dozen years after the elder Bud retired in 1984.

“They were always side by side,” Jim Johnson said of his parents, Carl and Sue, in a News story last year about the couple, who continue to make their home in Yellow Springs.

Unable to find an independent buyer when they retired in 1996, Carl and Sue Johnson sold the store’s stock to Revco/CVS, and the space, owned by the Odd Fellows Lodge, sat empty for more than a year, according to past News stories.

Seeking a pharmacy to continue where Erbaugh and Johnson’s left off, the Odd Fellows in 1997 leased the site to Fred Messina, then owner of Town Drug in Jamestown. Messina, who died in March 2016, brought the Town Drug name to Yellow Springs with him.

Tim Rogers, beloved for his accessibility and personal attention, became manager and lead pharmacist of the store in 1999, and his longtime associate Janice Blandford, who retired this past summer, became lead pharmacist after Rogers’ death in January 2014, continuing his personal style of customer care.

According to state business registration records, the local pharmacy, officially listed as Town Drugs, was acquired in 2007 by the REM Corp., a subsidiary of the Springboro-based Miami-Luken company, a wholesale pharmaceutical supplier.

Operating as REM Community Pharmacies, the corporation was established to
“preserve independent retail pharmacies … to prevent their sales to the major drug chains,” according to BioOhio, a statewide bioscience trade organization of which Miami-Luken is a member.

Prior to the pending sale, REM Community Pharmacies owned and operated about 20 community pharmacies in Ohio and Indiana, the majority of which are located in small towns and villages such as Yellow Springs.

A shadow, however, fell on REM’s parent company, Miami-Luken, in the past year. The 55-year-old business is among several wholesale drug distributors under DEA and Congressional scrutiny regarding their opioid distribution practices, particularly to  towns in West Virginia, according to media reports.

In addition, Miami-Luken was one of four drug distributors sued this past February by Ohio Attorney General Mike DeWine, who accused the companies, of “unsafe distribution practices” that contributed to the opioid crisis, according to a press release from the attorney general’s office.

REM Corp. and its individual retailers like Town Drug, however, have not been named or implicated in the federal investigations or state lawsuit. And the day-to-day operations at Town Drug appear untouched by Miami-Luken’s legal situation. The pending sale further separates the two.