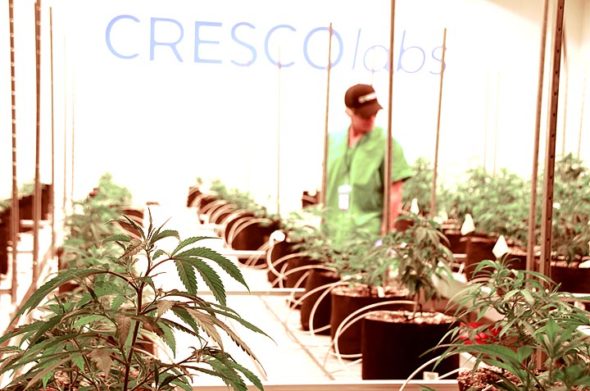 • Production began at Cresco Labs in September, as the compay began planting more than 30 strains of medical marijuana at its 50,000-square-foot cultivation facility in Yellow Springs. The first harvest of the first cannabis crop took place in late December.

About 14 employees were working at the facility, officials confirmed in the fall. The company finished construction in the summer and was previously awarded one of the state’s 12 large-scale cultivation licenses in November 2017. The Village sold Cresco the land at the Center for Business and Education on the western edge of town in June 2017.

• Jamie Sharp opened Yellow Springs Toy Company at 252 Xenia Ave. in March, not long after the closing of — and in the same space as — longtime local toy store Mr. Fub’s Party. Sharp said she planned to stock the store with empowering toys that spark curiosity and foster art, music, language and thinking skills and reflect diversity.

• Anthony Wall, the new owner of local custom screen printing business Basho Apparel moved its equipment and line of eco-friendly apparel to 125 S. Walnut St. from its previous home at Peifer Orchards in March. The business was started in town more than a decade ago.

• Brian Rainey, owner and chef of Sunrise Café, opened Calypso Grill and Smokehouse at the south end of town in April. The Caribbean-themed restaurant sells jerk chicken, empanadas, margaritas and other specialties in the former location of Dona Margarota’s Mexican restaurant. Rainey has owned the Sunrise Café since July 2004. Tony Avalos of Dona Margarota’s still owns the building at 1535 Xenia Ave., a former KFC.

• The Rose and Sal Company Mercantile opened for business at 136 Dayton St. in Yellow Springs at the former location of Atomic Fox. Owned by villagers Susan Burgos and Michael Bell, the store sells antique and midcentury modern vintage products, including furniture and appliances, and also has gallery space.

• Environmental educator Emily Foubert started her Nature Connect outdoor school in November. The school, held at Camp Greene on the edge of Glen Helen, included a Forest Family program for young children with their caregivers and a program for homeschoolers.

• When Brittany Baum opens the Greene Canteen at 134 Dayton St. in early 2019, villagers can look forward to the healthy fare of salads, smoothies, juices, sandwiches, soups, pretzels and more.

• In April, Yellow Springs Brewery’s Nate Cornett and Lisa Wolters toasted to five years since they opened up their business at 305 N. Walnut St., Suite B, in MillWorks. Since opening, the brewery had more than doubled its production and had about 50 people on their payroll at the five-year mark.

• Direct-mail-service and printing company DMS, Ink marked two years since taking ownership of the former Antioch Publishing building and property on the west edge of town, relocating its headquarters and a majority of its workforce from its longtime home in the city of Dayton. The company reported about 100 employees in early 2018.

• YSI, a local water instrument company celebrated its 70th anniversary this year. Now owned by Xylem of Rye Brook, N.Y., the company also received the Ohio EPA’s top award for environmental stewardship, the Encouraging Environmental Excellence award, which is given to businesses and other organizations that not only comply with state pollution rules but also participate in environmentally beneficial activities, both at their facilities and in their community. YSI received the award’s highest level, platinum.

• Beginning as a small cooperative financial initiative, Yellow Springs Federal Credit Union hit 70 years old this year. The credit union now has more than 2,000 members and close to $19 million in deposits, and has been housed in its Xenia Avenue location since 1977. The company is currently exploring other ways to boost the local economy, including through a local debit card.

• In July, Megan Bachman took over the role of editor of the Yellow Springs News from Diane Chiddister, who was the editor for the last 12 years. Bachman is also a co-owner, along with Matt Minde and Robert Hasek.

Earlier in the year, the paper won the Newspaper of the Year award, the highest honor in its size division, for the eighth year in a row at the annual convention of the Ohio News Media Association.

• The four-acre industrial and office complex MillWorks was purchased in September by husband and wife business team Antonio Molina and Jessica Yamamoto. The couple, who recently moved to town, purchased the property in the 300 block of North Walnut Street for $1.15 million, according to online real estate records.

• The village’s longtime lone pharmacy, Town Drug, got a new owner and a new pharmacist this year. Amy Kelly, a Cedarville University graduate, started on the job in October. A few months earlier, Janice Blandford left the post after 20 years on and off at the local pharmacy.

In December, the pharmacy confirmed that Benzer Pharmacy, based in Florida, is in the process of purchasing the local business from the Springboro, Ohio-based REM Corporation, which acquired Town Drug in 2007.

• After nine years, Williams Eatery at 101 Corry St. closed at the tail end of 2017 due to slow business, according to its owner, Lawren Williams.

• Restaurant Aleta’s Cafe located in the Oten Gallery closed in August after more than four years of operating. Proprietors cited issues with lease terms as the cause.

• Mr. Fub’s Party at 252 Xenia Ave. closed at the end of 2017 when Priscilla Moore, owner and operator of the business for 37 years, retired.

• The Fels Longitudinal Study, the world’s longest and largest longitudinal human growth study, came to a close due to actions by Wright State University. The Fels study was launched in 1929 by then-Antioch College President Arthur Morgan and was long located in Yellow Springs.

• The retro furniture and décor shop Atomic Fox, in its Dayton Street location for three years, closed the retail location in favor of online and auction sales. It originally opened in Kings Yard in 2013.

• Lady Loom women’s boutique at 255 Xenia Ave. closed as its owner, Danyel Mershon, merged the operation with her other local shop, Wildflower Boutique.