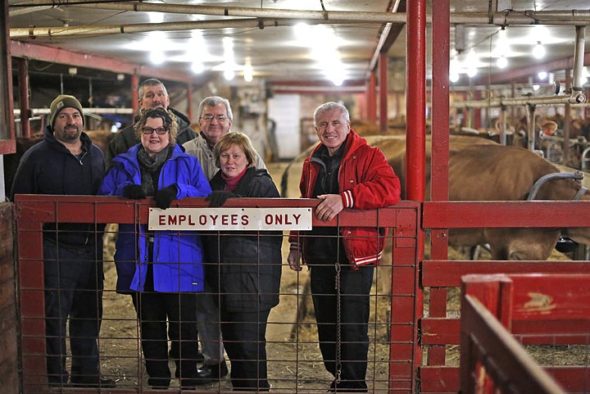 Some of the Young family who are on staff at the dairy. From left: Jay Young, Deb Young Whittaker, Kelly Young Green, Ben Young
Back row, from left: Stuart Young, Dan Young. (photo by Gary McBride)

Coming off their recent accolades in a “Best of Dayton” survey, this weekend Young’s Jersey Dairy is celebrating the 150th anniversary of the farm and its landmark red barn on Route 68.

They expect a large turnout for the event, January 18-21, which features special pricing on ice cream, food and recreation.

Last year marked the 60th anniversary of their retail operation, which began with selling fresh milk to the public. The now-familiar ice cream parlor and restaurant opened in 1972, while other attractions such as the Golden Jersey Inn, mini golf, pick your own pumpkins, a corn maze and more have been added over the years.

The Clark County tourist destination two and a half miles north of Yellow Springs received first place in the “Best Ice Cream” and “Best Place to Take the Kids” categories of the 2018 Dayton.com online survey. That site says the survey received a half million votes across 132 categories.

Young’s attracts an estimated 1.2 million visitors a year, according to Ben Young, human relations manager and part of the namesake family that still owns and operates the business.

“We’re bursting at the seams. On our busy days, we can’t get any busier,” he said.

150 years of history
A short history of the farm now sits on every table in the restaurant, but the real stories come from the many family members who still live, work and play around the land their great-great-grandfather Gerhardt bought on his return from the Civil War. Gerhardt, a blacksmith by trade, built the red barn in 1869 on the original 55 acres he farmed along what is now U.S. 68. His son-in-law, Charles Young, also farmed the land, as did Charles’ son Hap Young, an Oliver Tractor dealer and dairy farmer who had three sons, Carl, born in 1928, Bob, born in 1932, and Bill, born in 1942.

Carl and Bob, like their father, raised jersey cows for the family business, Hap Young & Sons. But Carl and Bob also had ideas of their own. Carl was an entrepreneur who liked to try new things, and Bob was good at making things happen.

The Youngs bred their own national champion bull and national champion cow from the existing herd right on the farm, and with the help of younger brother Bill, who had a dairy science degree from Ohio State University, worked on expanding their herd to about 100 cows. They sold most of the farm’s raw milk to Mohler’s Dairy in Dayton, keeping a small amount to sell straight from the farm’s milk house. Customers paid 60¢ per gallon and put their money in the milk tray on the honor system.

Meanwhile the brothers expanded the farming operations to over 500 acres in Greene and Clark Counties. They raised not only cows, but also hogs, corn and wheat. And they sold their grains and milk to other outlets, becoming the largest dairy operation in the area, selling 300 gallons of raw milk a day at the peak of operations in the 1970s.

The family also built a dedicated retail store in 1960 as an addition to the main red barn.

In the 1960s, another area dairy offered to make ice cream from Young’s milk. The sweet, creamy single dip cones in 25 flavors were an instantaneous hit, and it soon became Young’s all-time biggest retail item. Young’s has since brought the ice cream production in house. They built the second retail store and early restaurant in 1968, expanding that dairy store in 1972 and ’79.

They continued selling raw milk and raw milk products until 2002, when salmonella was found in a small sample of the milk.

Young’s remains a working farm, with 40 to 50 head of cattle, a couple dozen goats, some grazing land, fields of alfalfa hay and corn, plus the pumpkin patch for the popular “pick your own pumpkins” promotion.

Currently, Young’s has roughly 200 year-round employees, about 80 of whom are fulltime. During their peak season of April through October they employ as many as 350 people, said Ben Young.

Much of the workforce is made up of part-time high school and college student employees working four- or five-hour shifts.

“We hire a lot of first-time employees. This is their first job, and we feel that we owe it to them to give them a good experience, and teach them how to work,” said Young.

Say cheese
One of the major developments in recent years is the establishment in 2009 of an award-winning cheese brand, Young’s Farmstead Cheese. Last year they made over 80,000 pounds of cheese in numerous varieties.
“Now we use all the milk from our cows to make cheese,” Young said. Meanwhile the milk for Young’s ice cream is purchased from other area producers.

Demand for cheese products is so strong that they make cheese six or seven days a week, depending on the season. They produce several varieties of aged cheddar, plus colby, baby swiss, gouda and others, as well as several smoked cheeses. They had originally intended for these cheeses to make up the majority of sales, but things took an unexpected turn.

“The big seller for us is we take our cheddar cheese as a fresh curd and we deep fry it and sell it in the restaurant as a side order,” Young said. “That’s been a big hit with our customers, and it’s now our number one side order.”

In fact, demand is so high for cheese curds during the summer that it accounts for nearly all their production, with almost no capacity to make their aged cheeses.

“We even started our own food truck to get out the word on deep-fried cheese curds,” Young said. Dubbed “Young’s on the Moove,” the truck also sells ice cream and sandwiches at various venues and events.

A symbiotic relationship
While geographically located outside Yellow Springs in Clark County, Young’s considers itself to be part of the village community. Young’s attracts visitors to Yellow Springs, and vice versa.

“They’re very generous with their time, with donations and support,” she said. “They collaborate very closely with [the Chamber] promoting and marketing Yellow Springs — we really consider them to be a great asset.”

“We love being near Yellow Springs,” added Ben Young. “Folks can come to the area and spend a day — maybe go to Yellow Springs, Clifton Gorge and Young’s — and it makes a really nice outing,” he said.
However, Young’s has drawn some criticism from some members of the Yellow Springs community for hosting and sponsoring Republican political rallies at the facility, including most recently Mike DeWine’s victory rally after being elected governor.

Young’s attracts visitors to the area with less political events as well, such as their annual vintage truck show and the fall “Wool Gathering” event that showcases craftspeople from around the region who work with wool.

Young’s also hosts a charity bicycle tour each June with courses ranging from 28 to 83 miles which attracts hundreds of riders. Ben Young states that since its inception in 2002, the event has raised over a million dollars for a variety of charities.

“One of the fastest growing things we do is in-house catering for events,” he said. They offer picnic shelters suitable for company parties, family gatherings and other events. “We’re handling large groups — we had one group that was over 2,000 people.”

Moving forward
While a landmark anniversary is a time to reflect on their history, Young’s is also looking to the future.

“The family’s been in the farming business here for 150 years, and retail since 1958, continuously, in the same family,” Young noted. While it is incorporated, the shares are all held by members of the Young family.

“We all really want to see Young’s continue. The next generation of Youngs, whether they work here full time or not, they all have a vested interest to keep Young’s going as a business,” said Ben Young.

The popularity of Young’s continues to grow, thanks in part to its history and family orientation.

“I think our customers would revolt if we ever changed it too much — we have a lot of tradition here,” said Young. “I hear the story a lot that ‘I came here as a kid, now I’m bringing my kids’ — we really enjoy those types of traditions.”

For more information on the company and their anniversary celebration specials, visit http://www.youngsdairy.com. 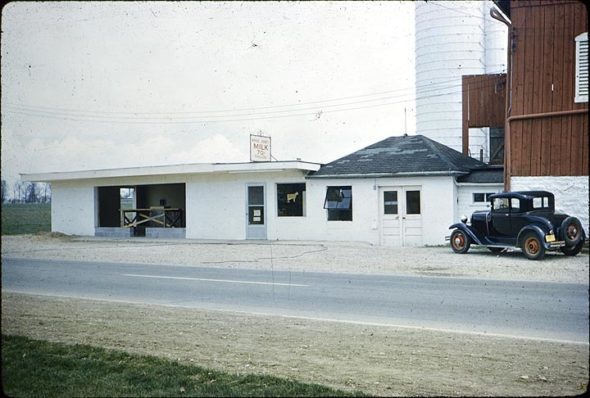 This photo from 1960 shows the expansion of the original dairy store. (Submitted photo)