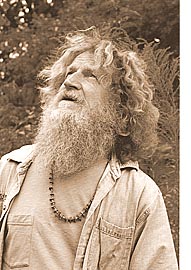 Born on the family farm near Bradford, Ohio, Nov. 5, 1940, at 5 a.m., Terry Joe Snider transitioned into the spirit realm on Dec. 22, 2018, at 5 a.m., during the rare conjunction of the full moon with the Winter Solstice, following a brief illness.

Raised in a farming family in the Church of the Brethren, one of three pacifist Christian denominations, he dedicated his life to peace and justice from an early age. Although he lived in various locations around the Miami Valley, eventually settling in Yellow Springs some 40 years ago, his roots were always in the beloved “Home Place,” the family farm near Bradford where he and his children returned frequently.

Terry was a healer and caretaker. Having worked as a social worker in Dayton for several years, he stopped just short of completing a master’s degree in counseling at Wright State in the 1970s to return to farming and seek a simpler, more authentic life.

For a while, Terry taught at the School of Medical Massage in Lebanon, Ohio, living on the premises and honing his skills in organic gardening and sustainable living. He farmed the organic farm on Swimming Pool Road that belonged to Rod and Willis O’Connor for many years, and cared for both of them until their deaths. Terry was co-founder, with Andrew Manieri, of the local CSA, Heartbeat Learning Gardens, which began on the O’Connor farm on Swimming Pool Road. Terry and Andrew recently moved Heartbeat to its new location on Hustead Road where, as one of Heartbeat’s key farmers, he continued to be an example, inspiration and mentor to many.

Terry was married three times, fathered five children, was grandfather to many children, both biological and children of the heart, and was friend to hundreds of lucky people. Terry led a very intentional life. He made a priority of meditating several times a day, which informed his life. It was his great joy to share this with others. In addition to his personal practice, he led silent group meditations for an hour or more nearly every day, for many years.

He was an anchor of the YS Peace Vigil, holding his blue world flag on the northwest corner of Xenia Avenue and Limestone Street every Saturday at noon, in all kinds of weather, for over a decade. Terry was an active member of the YS Friends (Quaker) Meeting for many years, taking the children for hikes in the Glen during Sunday meeting. He was a member of a dedicated group of Ohioans Against the Death Penalty and, along with Dr. Carl Hyde, held vigils outside of prisons during executions.

Terry was an activist, living his truth every day. Recently he described himself as “hardcore,” explaining: “That’s how you have to be if you live outside the mainstream. Otherwise, you’ll just get run over.” A deeply spiritual person, he was led constantly by his inner guidance. “Creation is so much wiser than we are,” he would remind us. Commenting on the trials and tribulations of life, he would tell us in his kind and hearty voice, “Well, it is what it is, and Creation is in charge.”

Terry spent many winters on the Dineh reservation at Black Mesa, Ariz., as an indigenous support person, assisting Dineh Elder Grandma Ida Mae Clinton as she stood her ground, refusing to be moved or relocated by the U.S. government. He committed his time and efforts for many years to protecting the land there and continued in the traditional ways she instructed as to tending the sheep of her family and tribe. This meant a lot to him, and he remained dedicated to her through several harsh winters, daily walking the land for miles and hours with the sheep in all weather conditions, until her passing. When he would return in spring, there could often be lines of eager people waiting at the Emporium to welcome him back, hear his stories of the challenges there, and receive an endearing “Terry Hug.”

In the last year or two, Terry has been active with a local nonviolent communication group, led locally by Diane Diller. He had a great respect for this practice, easily adding this awareness to his already highly developed communication skill set. 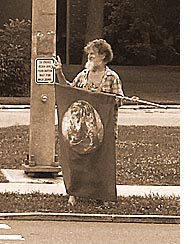 Close friend Abby Cobb shares: “A week and a half before his death, as we looked at some bad lab results together, he said quietly: ‘I’m dying. But the good news is I’ve done everything I wanted to do. There’s nothing on my bucket list! No regrets. I’m ready to go!’”

Terry, our beloved villager, friend and mentor to all who stopped by his table inside or out at the Emporium. He loved contra dancing, often attending the local dances, and was a skilled partner who was a confident and welcome guide to newcomers. A skilled listener, he always had a thoughtful word of encouragement and healing hugs. He was just always there for us — all of us. Beautiful soul. Terry represented all of the highest values of Yellow Springs: simplicity, connection to Mother Earth, thoughtfulness, resourcefulness, compassion, freedom of the spirit and joy. He will be greatly missed by his many friends at meditations, the Emporium, Sunrise Café, YS Friends Meeting and Heartbeat Learning Gardens.

Shout-outs to the many local health care professionals who helped him during his last few weeks as he sought treatment and eased his passing, including: Dr. Steve Bujenovic, of Reach Out Free Clinic; Dr. John Peterson, of the Ayurvedic Clinic of Muncie, Ind.; Dr. Mark Thornton; Judith Hempfling, RN of Hospice of the Miami Valley; Liz Porter, RN; and Paula Hurwitz, RN. Also to Jenny Haack, a very special and dear friend of Terry, in whose home he took his last breath, and who heard his last words: “Good night.”

Terry always did what was within his means to do. Sometimes those things were difficult, hard work; other times it was easier, but always simple, with heartful consideration of our whole Earth Mother in mind. Speaking to his experience of dying, he said he was “Present to the love and open to the light.”
Terry was preceded in death by his parents; his brother Max; his sister Ruth; and his daughter, Lisa. He is survived by his son Chris, and his family, of Miami, Fla.; his son Matthew, and his family, of Phoenix, Ariz.; his son Ted, also of Phoenix, and recently of Australia; step-daughter, Kara, of Iowa; brother Dan Snider, of Plymouth Ind.; sister Mary Kay Turner, of Gettysburg, Pa.; and numerous grandchildren and great-grandchildren.

A memorial is being planned for the spring, and will be announced as details become clearer. Tax deductible donations in Terry’s memory can be made to Heartbeat Learning Gardens at P.O. Box 831, Yellow Springs, OH 45387.

We invite you to remember that we each carry the best of Terry forward inside of us, and to enact that beauty by pouring yourself, your energy and your time into the many possibilities for good and caring projects calling to your own awareness and attention of this challenging time. Carry on — our time is often shorter than we think. “Thank you, thank you, thank you!”

One Response to “Terry Joe Snider”