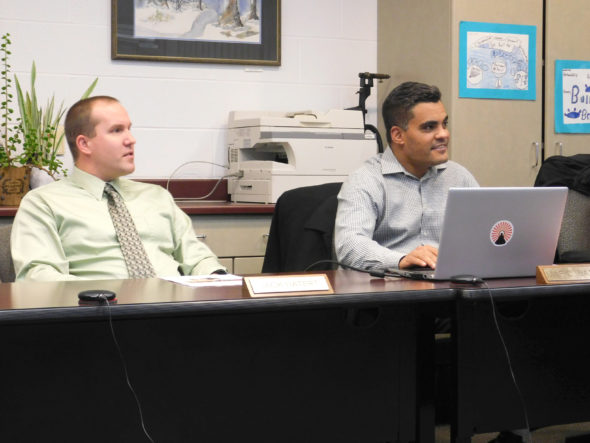 From left, YSHS/McKinney Interim Principal Jack Hatert and YS Schools Superintendent Mario Basora at last week's school board meeting. Basora is heading to a job in Huber Heights, while Hatert has applied for the permanent principal position at YSHS/McKinney. (Photo by Gary McBride)

Basora to depart the district

After nine years at the helm of the local school district, Yellow Springs Schools Superintendent Mario Basora will leave for the top district job in nearby Huber Heights.

The Huber Heights School Board unanimously approved the hiring of Basora as their new superintendent at a special meeting on Feb. 19.

Another district leadership change is set for the position of Yellow Springs High School/McKinney School principal. Jack Hatert has held that position in an interim capacity since the extended leave of former principal Tim Krier began in March 2018.

Read the Feb. 21 issue of the News for the full story on these and other developments within the local school district.