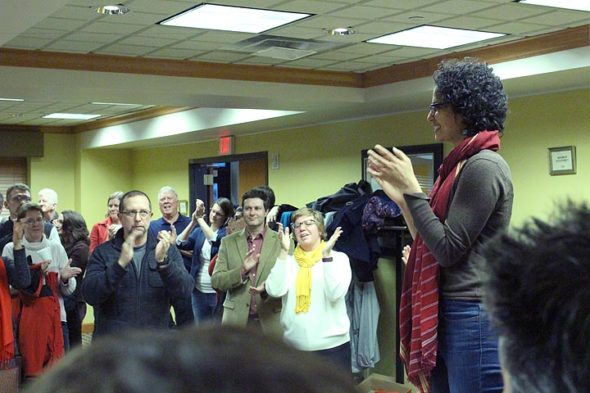 Wright State faculty and friends celebrated the end of their 20-day strike on Monday. Associate professor of economics and the union’s grievance officer Sirisha Naidu (at right) congratulated the crowd at strike headquarters for standing together. (Photo by Gary McBride)

To celebrate the end of the strike on Monday, around 200 faculty, union organizers, supporters and friends assembled at strike headquarters in the Wingate Hotel across Col. Glenn Highway from the WSU campus.

Stacks of picket sign “souvenirs” were there for the taking, along with a variety of donated food and snacks. The event had the air of a victory party, with high spirits, congratulations, handshakes and hugs as the 20-day strike wrapped up.

“Irrespective of what’s happened, this is our university. We have held the line, we have stood strong. Yes, we lost some things, but we haven’t lost our union,” she said in a rousing speech to the crowd.

In interviews, faculty members reflected on the strike and expressed relief that it had come to a successful conclusion.

Don Cipollini has been a professor of biological sciences at WSU for 20 years. A graduate of Penn State, he’s lived in Yellow Springs for 19 years. He said he was proud of his fellow faculty members for standing together.

“There was … some sadness that we even had to do this,” Cippollini said. “But I’m very proud to have stood with my fellow faculty and that we prevailed.”

Another villager, John Stireman, also a professor of biological sciences, said it was important that every union faculty member faced their own choice about whether or not to strike.

“I didn’t tell anyone what I was going to do, and I didn’t know what they were going to do,” he said.

“We all just did it of our own accord. We all made that choice because we knew it was the right thing to do.”

Villager Opolot Okia, professor of history, said the strike wasn’t the preferred course of action, even if it was necessary. He’s now looking ahead.

“No one wanted the strike,” Okia said. “The fact that we can now get back to work is great. We’re all ready to go.”

To Rudy Fichtenbaum, a strike negotiator for AAUP-WSU and a retired professor of economics who taught at WSU for 35 years, the central issue of the strike was about maintaining the union.

“What the administration was doing was trying to take advantage of a financial crisis that was created by the board’s negligence in managing the university in order to try to gut our contract and break the union,” Fichtenbaum said.

“We didn’t let that happen because we stayed united.”