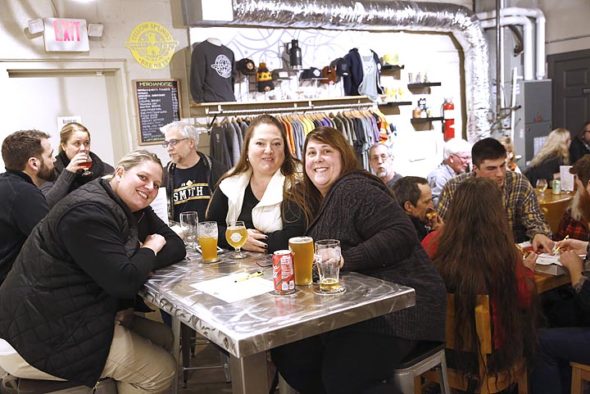 Christie Finney, Mary Taylor and Emily Rigsbee, in the foreground from left, are friends and have attended Trivia Nights at the Brewery fairly regularly for three years. They say they’ve never won, but have come close a few times. They welcomed this reporter to join their team, and we came in a respectable fourth place. (Photo by Gary McBride)

Trivia’s a-brewin’ with the Doctor

There are plenty of places in the area to play team trivia, but as usual, things are a bit different at the Yellow Springs Brewery. For one thing, there’s Dr. Dudek.

A) He was a radio DJ in Cincinnati.
B) He’s not into the whole brevity thing.
C) He’s an actual doctor.
D) He loves the show “Scrubs.”

The answer is C.

Ray Dudek has an actual Ph.D. in chemistry, and is a professor at Wittenberg University in Springfield. In addition to his professorial duties, in 2012 he started a trivia event at Wittenberg that is popular with students. But the questions are different in Yellow Springs.

“Usually, I’ll use the same themes, but the questions themselves change,” said Dudek. “Different audiences know different things. So if I ask these questions to the students, it might be too challenging because of the age difference.”

And vice versa, of course.

“I try to make the questions stuff people have a fair chance of knowing,” he said.

For the Yellow Springs events, he attracts a lot of faculty from the area colleges.

“There’s a bunch of Wright State biology professors who come in, so I can’t really do too many questions on biology,” said Dudek. He also doesn’t venture into his own field of chemistry for questions very often. And there are the other chemistry experts who attend.

“We have the beer crew here, so I don’t do too many questions on beer,” he said.

A villager for 15 years, Dudek hosted a summer of trivia at Peach’s in 2011 before moving on to Wittenberg in 2012.

“I just picked it up here at the Brewery about three years ago,” Dudek added.

2. How is this trivia night different from the others?

A) You’d better know your current events.
B) It has a round of “identify the picture.”
C) You might have to do actual math.
D) All of the above.

The answer is D.

Dudek isn’t very interested in the typical pop culture trivia questions. So instead, he tends towards current events, history, geography, science, math and so forth.

“Not to say there’s no pop culture — that’s going to be a part of it, but it’s just more of a medley. It’s not going to be all about ‘Cheers,’ for instance,” he said. (“Cheers” was a popular TV show that originally aired from 1982 to 1993, and lives on in syndicated reruns.)

For instance, at a recent event, he listed eight big news stories from 2017. The challenge was to put them in chronological order, from earliest to most recent.

To mix things up, there are visual rounds that add pictures into the equation. Each team gets a printout with 10 pictures to identify.

He’s also asked participants to name the fruit by the cross section, name the city by its subway map and even name the type of hat being shown.

“Whatever I can come up with,” Dudek said.

3. To compete for prizes, how many team members may participate?

On a typical night there will be six to 10 teams playing, three or four people per team. The top three scoring teams win brewery gift cards. Some teams are regular participants, others are more loosely organized, while some assemble spontaneously on the spot. Drop-ins are welcome.
Each event has a “bonus round” that doesn’t count toward the final score. They’re the six questions from a single “Trivial Pursuit: Genus Edition 4” card from 1996. (That’s “Genus” not “Genius.”)

This round has its own separate prize. At a recent event, the prize was an exotic snack from Jungle Jim’s — a bag of cuttlefish-flavored crisps. Everyone is welcome to compete in this round, teamed-up or not.

A) Don’t ask.
B) “You can really taste the cuttlefish!”
C) Pork rinds left in a dirty fish tank.
D) Victory, oddly enough.

The answer could be any of the above, honestly. The lucky winners did offer to share the bag of snacks with everyone in attendance, including this reporter. That was generous, wasn’t it?

5. When is Trivia Night at Yellow Springs Brewery?

That would be D, all of the above.

The Brewery holds the bi-weekly trivia nights during the winter months when business is a little slower. The event does regularly draw a good crowd, and the fairly leisurely pace allows people time to discuss the questions, enjoy their beer, get a bite from the food truck and just socialize.

Why not every week?

“It is a time commitment. Putting this together takes several hours each week,” in addition to the event itself,” according to Dudek. He said he comes up with the questions through his own research. He makes a little money hosting the event, but mostly does it for fun.

If you’re looking for a lively night of challenging trivia, there’s no question.