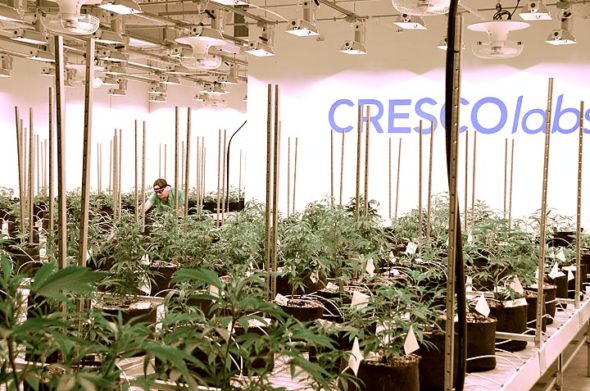 Cresco Labs's application for processing medical marijuana was not approved by the state. (Photo by Megan Bachman)

As markets open, Cresco has room to grow

Despite being the state’s first licensed medical marijuana growing facility, Cresco Labs of Yellow Springs will not be among the first marijuana processors;  last month its application for a processing license was not among those approved by the state in the first two rounds.

The security access control component of Cresco’s facility fell short of the state’s requirements for medical marijuana processors, according to documents obtained from the Ohio Department of Commerce. Processing results in marijuana products such as oils, dermal patches and edibles.

In response to a request for comment from the News, Cresco Chief Communications Officer Jason Erkes wrote in an email that the company is weighing what to
do next.

“We are disappointed with the results of our scoring, as we have received the highest scores on applications in other states for cultivation and processing, so we are evaluating our options,” he said.

Kerry Francis, chief of communications for the Ohio Department of Commerce, said Cresco could appeal the rejection once it had brought the system up to specifications.

Until Cresco receives processing approval, the company has the option of utilizing any of a dozen or so approved processing facilities within central and southwest Ohio, including several in the Dayton area.

“We have every intention of bringing our full suite of products — our pills, oils, infused products and edibles — to market in the state of Ohio,” said Erkes by phone last week. “We’re evaluating all of our options to process the product we’re growing in Yellow Springs.”

None of the approved processors are making products yet, so at this point, the only available item in the state is dried flower for vaporization use.

Looking at the big picture, Erkes said the beginning of Ohio’s medical marijuana program has been going well.

“The first wave of this rollout has been extremely successful and very encouraging for the outlook of the Ohio [medical marijuana] program in general,” he said.

The first four Ohio dispensaries opened on Jan. 16, and through Feb. 25, the reported statewide sales were $1,196,959 for 159 pounds of product, according to the state’s Medical Marijuana Program website.

That works out to a steep $470 an ounce. Other states, such as Michigan, started off with similar prices that gradually dropped as more cultivators, processors and dispensaries became fully operational, more doctors and patients participated and more products were offered.

Dispensary prices in Michigan are now down to between $150 and $300 an ounce, according to a recent Cincinnati Enquirer article.

Ohio currently has eight dispensaries open for business, all in the eastern part of the state. Over 50 have been licensed statewide. The distribution is based on population, with 15 allocated to the Southwest region of the program. Locally, Montgomery County will have three, as will Hamilton County, where Cincinnati is located.

Greene, Madison and Fayette counties will share just one, Harvest of Ohio in Beavercreek, on Tonawanda Trail near the intersection of Interstate 675 and Indian Ripple Road.

The Beavercreek dispensary is slated to open in April, according to Ben Kimbro, director of public affairs for Harvest House of Cannabis.

“We’re excited to be there,” he said by phone this week.

Neighbors have expressed concerns about the location, which abuts a residential area, but Kimbro says the updated facility will be a good fit in the neighborhood. The company plans to invest a lot into modernizing the facility, landscaping and security, he added.

“We make areas of town better,” Kimbro said. Harvest of Ohio will also have dispensaries in Athens and Columbus.

An application for a dispensary in Yellow Springs at the former Community Physicians building on Xenia Avenue was denied last summer.

Meanwhile, Cresco’s Yellow Springs facility is at about 80 percent of cultivation capacity, and is still considered to be in Phase One as of last week, according to Erkes. There are currently around 40 employees at the facility. Increasing production to full capacity would hopefully call for additional workers, he added.

In an interview for a September 2018 News story, Erkes said that Cresco had planned to hire about 20 more employees when it received state approval to process the plants into medical marijuana products, bringing the total local Phase One employment to about 60. But those additional jobs will have to wait.

Looking back to a 2017 News interview with CEO Charlie Bachtell, Cresco projected that Phases Two and Three would each add another 25,000 square feet of growing space and an equivalent amount of processing space, with 35 to 40 more full-time workers added in each phase. At full build-out, Cresco had projected the YS facility to be 150,000 square feet, or about four acres, with around 125 full-time workers by 2022.

Here in the early stages of Phase One, it’s too soon to tell if those projections will be met, or if they were overly optimistic.

When the Ohio Legislature passed House Bill 523 in September 2016, it set a timeline for the implementation of medical marijuana that itself turned out to be overly optimistic. On several occasions, the state broke its own law by missing deadlines.

There have been a variety of setbacks, delays and bottlenecks in the process that have frustrated many medical marijuana patients, but the wheels are moving now.

Cultivators have been harvesting for over two months, but have had to wait for testing labs, processors and dispensaries to open and start selling. Still, there is more supply than demand at present, according to Erkes.

“There’s certainly more product than there is demand for it right now, because the patient count is still low,” he said.

But more dispensaries are slated to open and more patients are receiving recommendations. (Doctors do not “prescribe” medical marijuana according to Ohio law — the term is “recommend.”)

About 400 physicians in Ohio are currently Certified to Recommend, according to the Ohio Medical Marijuana Control Board. And, according to the State of Ohio Board of Pharmacy, there are 12,873 registered patients through the end of January, and those patients have received 17,077 recommendations. The Board of Pharmacy has estimated that eventually between 200,000 and 300,000 registrations will be processed, which would make Ohio second only to California for the number of medical marijuana users.

Erkes is encouraged by the development of the medical marijuana market in Ohio.

“We’re excited about the Ohio market and the level of interest and enthusiasm from the patient community, from the state, from the medical community,” he said. “It’s very encouraging and exciting,” he added.