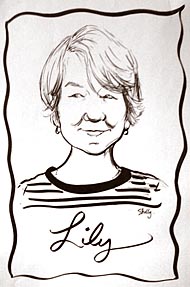 Lily (Baboryk) Fleder, widow of Franklin E. Fleder and mother of Anne (Fleder) Erickson and Adam R. Fleder, passed away peacefully on March 12, 2019, at Friends Care Assisted Living. She had a brief decline and Hospice of Dayton eased her transition. She was 92 years old — just a few weeks short of her 93rd birthday.

Lily was born in Cleveland, Ohio, to parents who emigrated from Poland. She was the youngest of four children. Her formative years were shaped by the Great Depression and World War II. She was the first in her extended family to attend and graduate from college. She met and married Frank Fleder in 1948, just after he returned from the war. She achieved a bachelor’s degree in sociology from Cleveland College (later Case Western Reserve University). She wrote for the Cleveland Plain Dealer, and later taught English. She achieved a master’s degree in library science from Kent State University, and spent the majority of her professional years as the librarian at the Cleveland Boys School in Hudson, Ohio. She was also quite a comedienne, and often seemed like a one-woman Vaudeville act.

Frank and Lily moved to Peninsula, Ohio, in 1957 and raised their family there. Peninsula was a primary passion in Lily’s life. She was a fierce pioneer in historical preservation and restoration in Peninsula. She remained very active in the Peninsula community until 2013. A health event necessitated her move to Friends Care Assisted Living in Yellow Springs to be closer to her daughter. In spite of her physical absence from Peninsula, it was still a primary passion in her life.

There will be a celebration of her life over Memorial Day weekend in Peninsula. Please contact the family for details. In lieu of flowers, please make a donation to either the Peninsula Foundation, the Peninsula Library, or Friends Care Memorial Fund.