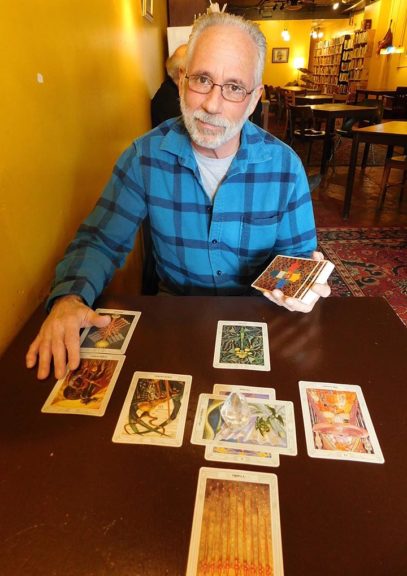 Joshua Hayward is well known in the village for his tarot card readings, astrological charts and as a meditation leader. His three-week course “Negotiating Shadow: Discovering the True Self,” addresses grief, loss and using the opportunity to grow, and will begin this Sunday. (Photo By Gary McBride)

Like many of us, Joshua Hayward knows a thing or two about grief.

His wife, Esther Lail, died in 2013, which is when Hayward’s “path to suffering opened up,” he said this week.

“When I lost her, it really put me in touch with deep, deep grief,” he said. But rather than just trying to endure it, he made a very conscious effort to also learn from the situation. And with time and great effort, he emerged with the goal of helping others grow through the experience.

Hayward’s newly formed Breath of Life: School of Esoteric Arts is offering a series of grief recovery classes. The first of three two-hour sessions is scheduled for Sunday, March 17, at 1 p.m., at the Humanist Building, 105 W. North College St., with the second and third sessions on March 24 and 31. It is $120 per person for the series.

Entitled “Negotiating Shadow: Discovering the True Self,” the class is billed as a powerful healing experience.

“I really want to educate the public about grief, and how we’re really not using it in the right way,” Hayward said.

While the class is about grief, it is not necessarily about bereavement. He calls it doing “Shadow Work.”

“It’s really about looking at the darkness we bump into in life,” he said.

Hayward’s theory is that we spend so much time trying to avoid suffering, and avoid what we fear, that we actually just create a whole lot more suffering.

“We tend to run away from grief instead of using suffering to try to temper or strengthen ourselves,” he said.

Beyond times of loss, Hayward feels grief is an ongoing part of our lives that we should learn to manage.

“I feel we really begin to lose parts of ourselves early on when we’re kids, so we’re really mourning those losses all the time,” he said.

Hayward believes that when people experience a major loss in life that really crushes them, that also opens a channel and insights into where they really lost themselves.

“We already have so much sorrow and grief in us, by the time we get triggered by a major loss, we have a wonderful opportunity to find out and discover the true self,” he said.

Hayward and Lail — an astrologer and a clairvoyant — came to Yellow Springs from Colorado in 2011, seeing it as an ideal place to practice divination and healing. They started practicing at  the EdenWorld Center for Wellness and Discovery. Hayward joined the House of AUM at its inception in 2015, but left in November to go in a new direction on his own.

“They have a wonderful thing going on, but I just found I needed to be by myself. I’m still in transition,” he said.

While Hayward is confident students will benefit from the classroom sessions, he is shifting from his original plan of doing mostly classwork in favor of working individually with people and families.

The program is also available on an individual basis if someone feels the need for more privacy or personalization.

Hayward is also an astrologer, tarot reader and meditation guide, “bringing all of those different aspects of what I do to bear into this grief of shadow work,” he said.

Hayward emphasizes that the class will be real work, and will yield definite benefits.

“People are going to walk away with tools to actually work on their grief,” Hayward said.

“When they go home, they’ll have a very creative process to really tap into what’s available for them. There’s a definite takeaway,” he added.

For more information or to register, call 767-1536, email jchiron9@gmail.com, or visit the Special Events page at breathof
lifeschool.com.