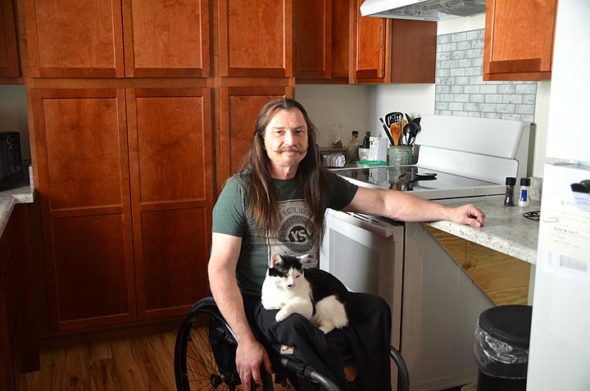 Nick Cunningham and his Japanese bobtail cat, Manny, in the fully accessible kitchen of Cunningham’s new rental apartment at 511 Dayton St. The apartment, one half of a newly built duplex, is part of Forest Village Homes, an affordable, accessible rental project developed by Home, Inc. to meet local rental housing needs. (Photo by Audrey Hackett)

How hard is it to find an affordable, accessible rental in Yellow Springs?

Ask Nick Cunningham, a medal-winning Paralympic athlete and the current president of the Village’s Human Relations Commission, or HRC. Cunningham lived for years with his son, Thomas, in a rental at West South College and High Street. But when the landlord died and the house was sold, father and son were stuck without a place to live.

“Being disabled in Yellow Springs is tough,” Cunningham, who uses a wheelchair, said in a recent interview.

They stayed with a friend in Fairborn for eight months, “trying every avenue” to find a place to rent in Yellow Springs, according to Cunningham.

Cunningham’s luck turned when his application was accepted late last year for a two-bedroom apartment in Forest Village Homes, a new Yellow Springs Home, Inc. rental project on Dayton Street with six units on two sites, just a half-mile from downtown. The $1 million project is the first multifamily rental property developed by the local affordable housing nonprofit in its 20-year history, according to Executive Director Emily Seibel this week. It is also likely the first multifamily rental built in the village for many years, she added.

“We really wanted to tackle this,” she said. “There’s such a need for affordable, accessible rentals in Yellow Springs.”

A recent study commissioned by the Village bears out the need for local rental housing. The Yellow Springs Housing Needs Assessment, conducted by research firm Bowen National Research and finalized last year, identifies an acute need for rentals in the village, particularly for lower-income families, disabled people and seniors. For example, there are reportedly 534 people in Yellow Springs with a disability, 14.9 percent of the population. Yet existing “units in the market meet only a small portion of the disabled population’s housing needs,” according to the report.

Overall, the highest housing need in the village is for rentals, according to more than three-quarters of local respondents to a recent survey conducted as part of the research. As Cunningham and others looking for rentals locally can attest, the rental housing market is tight in Yellow Springs. Existing local multifamily rentals have an occupancy rate of 98.3 percent, considered “extremely high” for rental housing, according to the Bowen report.

Also according to the report, the vast majority of rental housing in the village was built prior to 1969, meaning that repairs and modernization are needed in many local rental properties. For people with disabilities, that often translates into inaccessible dwellings.

Cunningham’s previous rental, for example, had a ramp out front, but no other specific accommodations for a person in a wheelchair. His new Forest Village apartment is different, he said.

Equipped throughout for a person in a wheelchair, the space features lowered kitchen counters and cabinets, closet shelves, sinks and other fixtures. There is a roll-in shower, a front-loading washing machine and a stove with knobs on the front.

“Just to be able to wheel into the bathroom and close the door — that’s a big deal for people in wheelchairs,” Cunningham said.

Forest Village Homes is designed to be accessible and adaptable for people with disabilities, according to property manager Brittany Parsons Keller, who occupies a new full-time position at Home, Inc. overseeing rentals.

“We are renting to people with special needs and to seniors,” she explained, pointing out that the definition of “special needs” is expansive. Prospective renters must also qualify by income. With an average rent of less than $545, which includes utility costs, the units are priced to be affordable to households with between 50 percent and 60 percent of Area Median Income, or $23,000 to $27,600 per year for a one-person household.

Forest Village Homes consists of a two-bedroom duplex at 511 Dayton St. and four one-bedroom “garden cottages” at 540 Dayton St. One unit in both locations is fully accessible to a person in a wheelchair, while the other units are adaptable to renters with special needs.

Specific features of the units reflect community input from focus groups and other listening sessions, according to Seibel, including the “garden cottage” design, in-unit washers and dryers, a high level of energy efficiency, utilities included in rents and the ability to have pets in the -apartments.

“People were passionate about pets,” she laughed.

Currently, the duplex is rented, while Home, Inc. is accepting applications for the four garden cottages through Tuesday, April 30. Applications are available online at yshome.org, or for pickup at Home, Inc.’s offices at 202 S. Winter St. People with questions can call Home, Inc. at 767-2790.

After the deadline, a random number generator will select qualified tenants. More than 100 families, both locally and further afield, have already expressed interest.

“The excitement has really been building,” Keller said.

With more than $1 million in development costs to meet, Home, Inc. had to creatively bring together funds from multiple sources to build Forest Village Homes, according to Seibel.

“We layered together different funding sources,” Seibel explained. “Now that we know how to do this, we hope to replicate it.”

Home, Inc. is planning an open house celebration for Forest Village Homes at the end of May.

Meanwhile, the nonprofit is working on another project that incorporates rentals, Glen Cottages. That project, to be sited on an acre at 1133 Xenia Ave., is envisioned as a pocket neighborhood featuring “a diverse and inclusive mix” of six rentals and six owner-occupied homes, according to Seibel. The rental portion will “mirror Forest Village Homes,” she said. The total projected development cost for Glen Cottages is a little over $2 million.

Home, Inc. is also waiting to hear from the Ohio Housing Finance Agency regarding funding for its proposed 54-unit affordable senior housing rental project on 1.8 acres at the site of the former Wright State University medical clinic on Xenia Avenue. Seibel recently received word that Home, Inc.’s application passed one hurdle with that agency, with a final decision to come May 15. The total cost of the senior housing project is estimated at $9 million.

The new portfolio of projects, with an emphasis on rentals, is a taste of things to come, according to Seibel.

“We want to do a mix of incremental and infill development projects, and identify partners for larger projects going forward,” she said.

While Home, Inc. remains committed to affordable home ownership in the village,  the nonprofit is broadening its reach and focus.

“We are not abandoning home ownership by any means,” Seibel said. “But by ramping up our scale to include rentals, we are beginning to meet a big need in Yellow Springs.”

Cunningham signed his lease March 1 for his new two-bedroom digs at 511 Dayton St. A couple of days later, serious medical issues landed him in the hospital for an extended stay. Just recently back home, he is now busy setting up his new place, with the help of his girlfriend, Angie Hughes.

“I almost have the kitchen the way I want it,” he said.

With housing in place, and his health on the mend, Cunningham hopes to return soon to his job as a personal trainer at the Dayton YMCA, as well as continuing his service locally with the HRC.

That kind of outcome is exactly what Seibel calls the “social return on investment” from housing projects like Forest Village.

“All of the paperwork melts away when you see the profound impact [stable housing] has on people’s everyday lives,” Seibel said. “It can really change someone’s life, and impact the community.”

As for Cunningham, he said he’ll feel fully at home when he retrieves his racing wheelchair from Hughes’ house. He has a space cleared for it on his front porch. And then he’ll get back to training.

One Response to “Forest Village Homes—Home, Inc. expands to rentals”