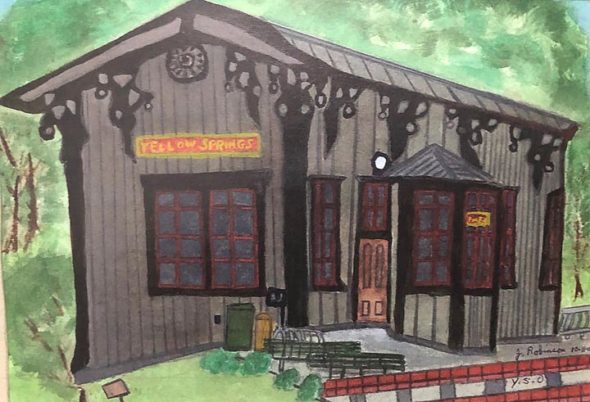 A watercolor by Joseph Robinson depicting the Yellow Springs train station. Paintings and poetry by Robinson, who lived in Yellow Springs for 50 years until his death in 2012, will be on display at the YSAC gallery beginning April 20. A reception will be held Friday, April 19, from 6 to 9 p.m.

Joseph Robinson at YSAC gallery— The village, seen through eyes of joy

The exhibit opens with an evening reception from 6 to 9 p.m. on Friday, April 19, and runs through May 12 during regular YSAC gallery hours, Wednesday through Sunday, 1 to 4 p.m.

Featured are about 60 watercolor paintings, most of which depict storefronts and other structures in downtown Yellow Springs. Anyone acquainted with the village will recognize a host of familiar buildings, circa the early 2000s. The paintings are executed in a precise, straightforward style that earned Robinson the moniker “Grandpa Moses” — after famous folk artist Grandma Moses — among his family and friends. Poems, focused on daily life and family, are also part of the show.

“I just get this really warm feeling when I look at his paintings,” said Priscilla Bennett, who is married to Robinson’s grandson Kearbey Robinson. Bennett, who has a doctorate in cultural anthropology, is the main organizer of the YSAC show of works by a man she never met — but feels deeply connected to through both the art and family he left behind.

While many villagers remember Joseph Robinson, who died in 2012 at age 81, as a PTA president, member of the Jaycees civic group, YS Athletics Booster and founder of the still-active Yellow Springs Soccer League — among other roles — he was a man of many artistic talents and pursuits, as well.

“He was a true Renaissance man,” his daughter Jocelyn Robinson said in an interview this week.
Born in Springfield in 1931, Joseph Robinson served in the United States Air Force for four years. While stationed in England, he met his bride-to-be, Joyce, then a 17-year-old Englishwoman. The couple married and returned to the United States, eventually settling in Yellow Springs with their children in 1962. Robinson worked nearby in logistics at Wright-Patterson AFB until retiring in 1986. While Yellow Springs was “no racial utopia by any means,” it offered the interracial family a measure of acceptance and welcome not found in surrounding towns, according to Jocelyn Robinson.

“He loved this town, in part because it gave all his family an opportunity to be who we are,” she said.

All six Robinson children grew up here, and three — Jocelyn, Jody Pettiford and Jo Frances Reichert — have made the village their home. Robinson’s wife, Joyce, still lives in the family home on Stafford Street. This week, she recalled her husband as a warm, gregarious person, a stand-out athlete in multiple sports as a younger man and a person of kindness and zeal in all his pursuits. During retirement, he embarked on a second career as a Motor Meals volunteer, bringing food to seniors across Greene County.

“He never met a stranger, and he loved to talk,” she said. “He was an all-around good guy.”

According to Jocelyn Robinson, her father had written poetry since he was a young man. He self-published a “little book, full of lovely and intimate vignettes of his life,” she said. Some of those poems will be reproduced for the YSAC exhibit. He came to visual art later in life. His longtime goal was to earn a bachelor’s degree, which he did in 1999, graduating from Wittenberg University with a liberal arts degree. He was 69.

“It meant so much to him,” Jocelyn Robinson said.

It was at Wittenberg that he turned his hand to watercolors, studying with professor Jack Mann, and continued painting with watercolors for the rest of his life. Around the same time, he had a kidney transplant due to a genetic condition called PKD — one of his daughters was the kidney donor — and used painting and another artistic love, photography, as tools on his long road of recovery, according to Jocelyn Robinson.

“It wasn’t therapy exactly, but it was a healing activity,” she said.

Though painting was a hobby, it was a serious one. Robinson admired the simple, evocative street scenes of French painter Maurice Utrillo, according to Jocelyn Robinson, and his own painting reflects a similar style.

“I saw his art in every store — a loving and quirky watercolor rendition of each storefront,” she wrote in an email.

His work is still on display at the post office, Town Drug and the YS News. Though he sold a few paintings, he also gave many away, Jocelyn Robinson said.

One of his grandsons, Addison Pettiford, has described his work as “truly capturing the essence and character of Yellow Springs.” Pettiford helped Priscilla Bennett, who lives in Florida, organize the upcoming YSAC show. The exhibit has a historical dimension, in that some of the businesses have closed in the intervening years. The village has changed visually in numerous ways, and Robinson’s portraits reflect and preserve Yellow Springs as it was at the turn of the millennium.

Bennett said she was inspired to create the exhibit while at a family gathering in Yellow Springs a couple of Thanksgivings ago. Surrounded by his art in the family home, she marveled at what a rich legacy he had left — a legacy that over time was being dispersed.

“I really wanted to see this happen,” she said of the exhibit. “He was a really important figure to my husband, and to the whole family.”

Jocelyn Robinson echoed that view. “We all carry so much of him through our lives,” she said of his children, grandchildren and generations beyond.

An African-American man who came of age during overtly racist times, her father had a firm motto, she said. “Always be above and beyond reproach.” The credo reflected his social and cultural reality, and it served him well, she believes.

“Born in the small town of Springfield, he ended up living an incredibly rich and creative life,” she said.

Robinson was known familiarly as “Big Joe.” Though he was small in stature, the nickname wasn’t really a joke about height, according to Jocelyn Robinson. Rather, it recognized the size of his presence.

After Robinson died, his wife found a “to-do” list he had left in a drawer. It included various mundane items: reminders to “mow the lawn” and make minor home repairs. The last item on the list was different. “Live life to the fullest,” it read.

“Up until the very end, that’s what he did,” Jocelyn Robinson said.

She hopes the YSAC show will impart something of Robinson’s zest for life and keen, loving eye to the community he loved and served for 50 years.

“Anybody that ever met him knew he was a man so full of joy,” she said. “And it was infectious.”