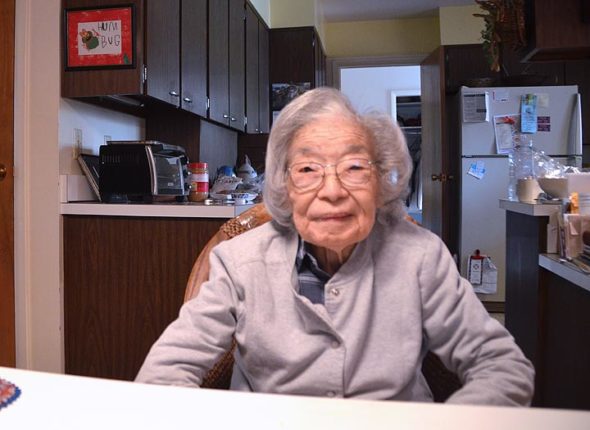 Toshiko Asakawa sits in the kitchen of her President Street home. On the wall behind her is a drawing done by one of her grandchildren, who is now an adult. On May 9, Asakawa will celebrate her 100th birthday. (Photo by Lauren “Chuck” Shows)

On a recent Friday afternoon, Toshiko Asakawa sat at her kitchen table, eating a late breakfast of ham, eggs and toast. She refilled her cup of green tea from a small, cast iron pot, which her son, Steve Asakawa, and her caregiver, Cheryl Tate-Sell, who lingered in the kitchen with her, remarked was particularly heavy. At 99 years old — just a few weeks shy of her 100th birthday — Asakawa lifted the teapot with ease.

When asked if she had expected in her youth that she’d live to be a century old, she answered quickly: “No — never!”

Asakawa will celebrate her 100 years at a reception on her birthday, Thursday, May 9, 5–7 p.m., in the Glen Helen Vernet Building.

Asakawa’s life — like the ease with which she lifts her teapot — is something of a study in defying expectations. A native Californian, she was, like many Japanese Americans, burdened with the specter of racism, particularly during World War II. Nevertheless, she became a registered nurse during that time — a career that was cut short when she was imprisoned in an internment camp in Arizona.

At war’s end, Asakawa and her husband, George, who died in 2012, moved to Yellow Springs. She said it was originally George’s brother, Moto, who put the village on her family’s radar — he took a job at Antioch College in student housing. In 1945, Asakawa and her husband joined the family there, where George began his decades of work for Vernay Laboratories. Though Moto and his family left the village, Toshiko and George had found their home here.

“In California, there was a lot of discrimination,” Asakawa said. “Here, everybody seemed very friendly.”

In the late ’40s and early ’50s, Asakawa worked as a research assistant with the Fels Institute, providing research for studies on childhood obesity and on the body shapes and structures of 200 adults. She went on to pursue her master’s degree in library science, working as a librarian in the Yellow Springs Schools, before retiring in the ’70s.

For many years, Asakawa and her husband hosted the annual local Japanese New Year party. The party was, and remains, a tradition for Yellow Springs’ community of Japanese Americans; many of the founding members of this small community, like the Asakawas, came to the village from internment camps.

Asakawa also volunteered often at Glen Helen over the years, which she says she still visits occasionally.

Asakawa said she cultivated a keen love for gardening throughout her life; she had a greenhouse at her home on President Street, where she’s lived since the ’60s, and particularly has enjoyed growing vegetables. She is also a skilled grower of orchids, a flower known for its temperamental nature, and she would often give them to friends and family — “but only on special occasions,” she said.

Asakawa said that, at nearly 100 years, she’s outlived many of the friends she’s made throughout her 74 years in the village. Nevertheless, she said she’s made new friends over the years, particularly when she gets new neighbors.

One such friend and neighbor is Jo Wilson, who is several decades Asakawa’s junior. Wilson, who planned the reception with Steve Asakawa and Tate-Sell, said via phone last week that she reckons the two have been friends for around 30 years. Wilson finds her friend fascinating, she said, and she’s planning to write a young adult nonfiction book about Asakawa’s experiences.

“She has such wonderful stories!” said Wilson. “More young people should know about her life.”

On the wall behind Asakawa is a framed drawing of a colorful little stick monster, captioned in childlike handwriting as “HUMBUG.” When asked about the drawing’s origins, Asakawa proudly stated that it was drawn some years ago by one of her grandchildren, who is now an adult. Steve, sitting across from his mother at the kitchen table, said she’s particularly looking forward to seeing her far-flung family at the reception, including her son Carl, who lives in England, and her grandchildren, who are coming from Portland.

“And my great-grandson,” Asakawa chimed in. “He’s about 17 months — he’s a cute little thing.”

When asked how it feels to be 100, Asakawa took several moments to reflect. She agreed when those at the table with her mused that 100 happens gradually, and that perhaps one doesn’t just wake up and feel 100 years old.

“I feel very fortunate that I’ve lived this long,” she said, pouring herself more tea. Returning to the question at hand, she reminded her audience that her birthday was still nearly two weeks away.

Toshiko Asakawa’s 100th birthday reception will be held Thursday, May 9, 5–7 p.m. in the Glen Helen Vernet Building. Those planning to attend are asked to RSVP by Monday, May 6, to jwilson5256@gmail.com or 767-7519. The event will be catered by Current Cuisine, and guests are asked not to bring gifts.

A service will be held for Charles W. Benning at 11 a.m., Saturday, Jan. 16, 2021 at Porter-Qualls-Freeman Funeral Home, 823 S. Yellow Springs St. in Springfield. Social distancing and face masks will be required.

A full obituary will appear in a future issue of the News.