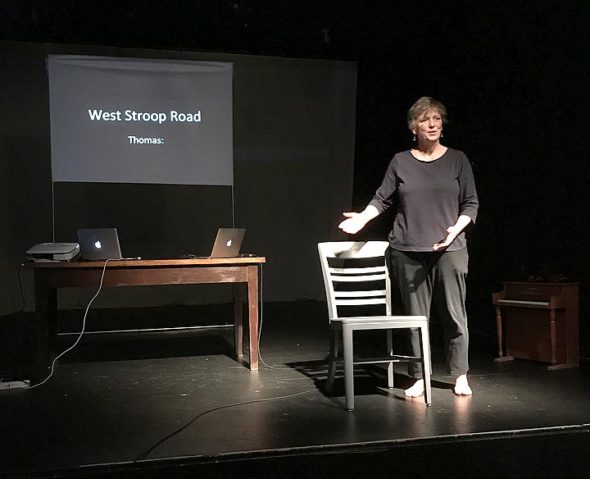 Antioch College Associate Professor of Performance Louise Smith debuts her latest piece, “DOROTHY LANE: a travelogue,” May 17–18, at 8 p.m. at the Foundry Theater’s experimental theater. Smith, who has a background in theater and psychology, wrote the fictional piece after working as a community mental health therapist in Dayton and Springfield. (Submitted photo by Migiwa Orimo)

“Can people recover from a debilitating mental illness with such limits to the support they are offered? Can a city recover from a recession with such endemic challenges caused by forces greater than the ones on the ground? Can a system that is bent on profits care for people? Can a caretaker who has herself been abandoned have the resources to really be of help?”

These are the questions that Louise Smith, a veteran writer and actor, therapist and Antioch College performance professor, addresses in her newest work, “DOROTHY LANE: a travelogue.” Smith will debut the new piece on Friday, May 17, and Saturday, May 18, at 8 p.m. in the Foundry Theater’s Experimental Theater.

“DOROTHY LANE,” which was inspired by Smith’s three years as a community mental health therapist in Dayton and Springfield, is the fictional chronicle of a therapist working in Dayton in 2008, when the city was deep in a recession. Smith said in an interview last week that the piece originally began its life as more than 100 pages of creative nonfiction.

“I wanted to work on being a writer,” she said. “As a performer, you can do a kind of sales job on your own writing to sell it, but I wanted to see what it would be like to just try and write, and let it live on its own.”

Smith was part of a writing group that included community members Bomani Moyenda, Joyce McCurdy, Venita Kelly and Mary Morgan. She workshopped the early prose that would eventually become “DOROTHY LANE” nearly a decade ago in the group.

“It was very affirming in that they said this is a story that should be told,” she said. “A story about vulnerable lives and a vulnerable city and my own vulnerability.”

After working on and living with the material for a while — and feeling stuck on how to present the work — Smith said a friend suggested that she take the many pages of material she had produced and return to her roots in theater.

“I realized that, yes, this is very performative work, actually,” she said. “And I thought, ‘Okay, well, I am a playwright.’”

Smith submitted her raw pages to the Ohio Arts Council and received a playwriting fellowship to work on creating “DOROTHY LANE.” She also worked in residency at the Vermont Studio Center.

Smith said that her interest in mental health and psychology was actually a product of studying theater at Antioch College, from which she graduated with a theater degree in 1977. She learned under famed actor and theater professor Meredith Dallas, who himself earned a Ph.D. in gestalt psychology at the Union Institute in Cincinnati. Part of Dallas’ dissertation involved leading a gestalt theater class called “Family.” As part of the class, Smith and her fellow students were instructed to delve into their own psyches by enacting their family histories. The work she did in the class with Dallas sparked a keen interest in psychology — for years after graduating, she would immerse herself in reading books on psychology.

Smith came back to the college in the ’90s, after years on the stage, to lead the theater program. But by 2003, the college had entered a period of economic and directional turmoil. Sensing a sea change in the air, Smith began formally studying psychology at the University of Dayton that year while she was still working at Antioch.

“I thought, ‘This will be my retirement career, so I know that I have a place to go when I leave Antioch,’” she said.

Her instinct ended up serving her well: she graduated with her M.S. Ed. in community counseling from U.D. in May of 2008, and Antioch College closed the next month. By August, Smith was working her first job in community mental health.

Smith worked as a therapist for three years in Dayton. She said that, as a native New Yorker, she initially felt a certain amount of distaste for the struggling city, but that working with the people who live there ended up fostering compassion.

“My heart really went out to the city,” she said. “This was a city in distress, a city that’s trying really hard. And then inside all of that, there are people in distress. So [“DOROTHY LANE”] is about what’s under the surface of things, and what care really means and what recovery really means.”

Smith returned to Antioch in 2011 as the Dean of Community Life. Despite her unhappiness with the college prior to its closure, and the fulfillment she’d found working in mental health, she felt drawn back to the college.

“I had this epiphany: in feudal times, the whole community got together to build the cathedrals,” she said. “That’s what Antioch is for Yellow Springs — it’s like the cathedral we keep trying to build for ourselves here. So I decided to use my counseling skills to apply for the dean job.”

In 2014, the position of performance professor opened back up, and Smith again felt called to return to her roots. She applied as part of a national search, and is now again at the theater program’s helm.

Though theater and therapy may seem incommensurable at first glance, Smith said she feels the two fields are connected at their foundations.

“We contain multitudes, you know,” she said, paraphrasing Walt Whitman. “There’s the idea of consistency of personality or identity, that we’re all in-process all the time. I think that’s true in acting, and I think it’s true in therapy — and certainly my lived experience.”

Smith describes “DOROTHY LANE” as being something like a radio play — she’s telling the story through the voices of different characters, underscored with music by New York artist Meredith Monk. It’s also part travelogue, as noted in the play’s full title: during her time working in Dayton, she took many photos of the city’s streetscapes, which she projects behind her on stage as she performs. Both the music and the projections are controlled by Smith on stage.

“DOROTHY LANE” is directed by Lizzie Olesker, a playwright, performer and director whom Smith met at Antioch; the play’s set was designed by villager and artist Migiwa Orimo. Smith said it’s not unusual for actors performing their own work to collaborate with others on the process, even when it comes to directing.

“You need the outside eye,” she said. “I worked with a mask maker named Ralph Lee years ago, and he’d show us how to make a mask and he’d say, ‘It wants to have eyebrows, it wants to have a mustache.’ I never forgot that — the work wants to be what it is. So I’m going to take the director’s advice, and the director’s going to respect my vision. There’s not a lot of ego in it.”

Smith said that there’s always been an aspect of psychology in her work for the stage — or, at least, her own psychology.

“So much of theater is sort of mining your own psyche,” she said.

“DOROTHY LANE” marks the first time that Smith’s work has addressed psychology and mental health so directly, however — and she said it will probably be the last.

“I don’t think I’m going to do this again,” she said. “It took me nine years to really get the courage to do it.”

Smith’s continued relationship with the theater is something of a given for her, both as a performer and a full-time professor at Antioch. But she also feels that, ultimately, working in therapy is where she’ll end up again some day. To that end, she still continues to work in mental health, on a very part-time basis.

“Therapy, like theater, is such a process,” she said. “You have to practice — and if you don’t practice, you get rusty.”

“DOROTHY LANE:  a travelogue,” will be performed on Friday, May 17, and Saturday May 18, at 8 p.m. in the Foundry Theater’s Experimental Theater at Antioch College. Admission is free, but seating is limited. Those planning to attend should make reservations in advance by emailing louiselittlehouse@gmail.com. Donations will be accepted and light refreshments will be served after each performance.