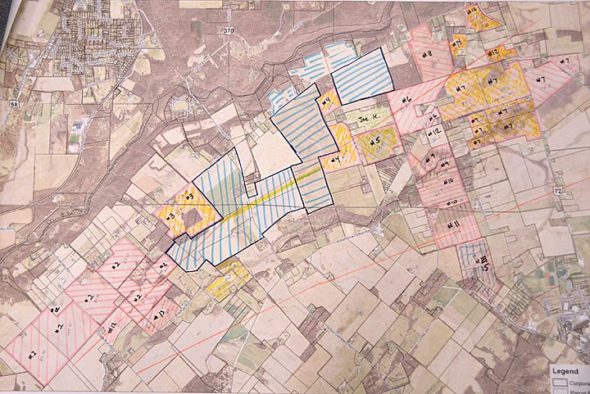 An industrial-scale solar farm is slated for the rural area east and southeast of Yellow Springs. In pink and yellow are the properties that have already been signed up to longterm leases (yellow additionally connotes the lease has been recorded at the county.) Properties in blue have been approached for a lease but have not signed up.

A large swalth of rural land just outside of the villages of Yellow Springs and Clifton could one day be the site for an industrial-scale solar photovoltaic field.

An Australian company looking to build the solar array has already secured longterm leases on close to 2,000 acres of land in Miami Township, Xenia Township and Cedarville Township. Properties along Clifton Road, Wilberforce-Clifton Road, Larkins Road, Harbison Road, Fishworm and State Route 72 have already signed up and more lease offers in the area are still being considered.

Click here for a large version of the map

That group will hold an informational meeting about the array on Friday, May 10, at 6 p.m. at the Grace Baptist Church, 101 N. Main St., in Cedarville. All are welcome to attend.

Last year, the News has reported that the company Lendlease had secured 1,400 acres in that area for its Kingswood Solar Farm. According to the lease terms, the land would be used for 43 years, during which time property owners would be paid $1,000 per acre, a rate that increases every few years for inflation. 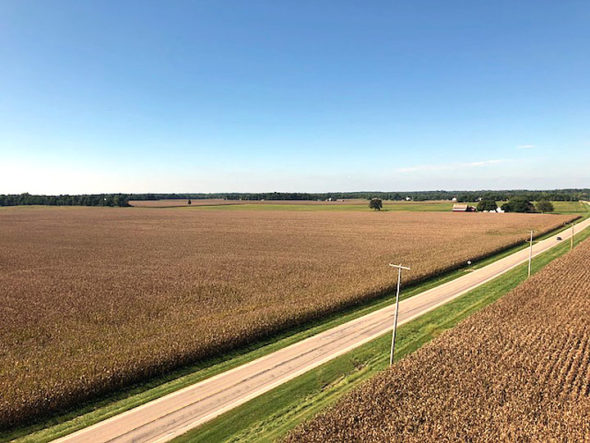 A view from the top of a grain silo along State Route 72 overlooks fields that have been leased for an industrial-scale solar array of close to 2,000 acres. The photo was taken last fall.

According to area landowner and farmer Joe Krajicek, farmland in the area currently rents for around $200 per acre.

Krajicek, who lives on Tarbox-Cemetery Road, understands the financial temptation to sign up, but is disappointed that many local landowners have already done so.

“I am truly disappointed in this decision for personal gain that will ruin the rest of the community,” Krajicek said this week. “This will have a big impact on the footprint of our community.”

Lendlease has yet to apply for a state permit to build the solar farm, according to the Ohio Power Siting Board’s website. The project is not a matter of local zoning because of its large size, Miami Township zoning inspector Richard Zopf previously told the News. After the company applies, the Ohio Power Siting Board will host a forum in the area and accept public comment.

The Tecumseh Land Trust, meanwhile, does hold several conservation easements on farmland in the area that would prevent them from being used for solar installations, according to land trust Director Krista Magaw last year. Landowners looking to conserve their properties rather than lease them for the solar array can contact that organization to learn more at http://tecumsehlandtrust.org.

The issues with large-scale solar

One Response to “Group organizing against area industrial solar farm”