At lunchtime at YSHS this spring, left, Sumayah Chappelle looked optimistic about her lunch, while Alexis Longshaw and Romel Phillips didn’t appear to be pleased with their meals. (Photos by Sokhna Sene)

Editor’s Note: In collaboration with Yellow Springs High School, over the next few weeks, the News will publish a series of articles, written by students, for a project on the critical issues YSHS students say they face.

Teacher’s note: “Psychology/Sociology is an elective course I teach to 11th and 12th graders at Yellow Springs High School. For a project this past year, student groups investigated various topics in the small social universe that is YSHS. These ranged from school lunches and technology addiction, to cliques and stress.

Students began by researching their issue, conducting an anonymous survey of the student body and interviewing fellow teens and adult experts. Finally, each group compiled their findings into a short article, some of which will appear in the News.

We welcome your feedback. Please send any responses to the project or the student articles to jday@ysschools.org. — John Day

It is mid-morning at Yellow Springs High School. Students already can smell what is for lunch, whether it’s cooked broccoli or breadsticks. By the time 11:31 a.m. comes around, everyone rushes to the cafeteria to hop in the typically long lunch line, which often wraps around the corner to the front door. Or they rush to get to the microwave to warm up their packed lunch.

As part of John Day’s Psychology/Sociology class, I investigated school lunches for an assignment looking at school issues. For the project, we wrote research papers, surveyed other students throughout the school and interviewed experts on their topic.

According to our survey, of 179 out of 220 students at YSHS, about half of YSHS students buy their lunches and the other half pack their lunches.

For those who buy, their lunches come from Sodexo, a food services company serving 12,500 institutions across the country. Sodexo hires nutritionists and chefs to try and create tasty meals that also meet the nutritional standards established by the government, according to an interview in the spring with Bonita Pence, a Sodexo employee at YSHS. 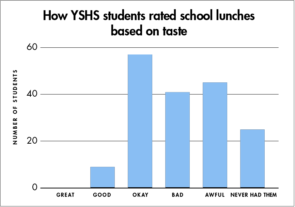 About half of YSHS students surveyed this spring rated school lunches, provided by Sodexo, as “bad” or “awful.” (Chart by Sokhna Sene)

According to Pence (referred to by students as “Miss Bonita”), most of the meals are pre-made and pre-cooked. She explained that most meals are frozen until ready to be heated in the oven or on the stove. She also noted that “some of our equipment to prepare food is as old as I am.”

Pence said reheating precooked meals is typical for school lunch services, despite her preference for how it should be.

“Every company that I’ve worked for, it’s all basically pre-cooked food,” she said. “I would like to see everything cooked fresh.”

Specifically, Pence said that she would like to see a decrease in processed meats served.

“You know, you can only eat so many chicken nuggets or chicken tenders,” Pence said.

Students agree that the food leaves something the be desired. Of the 179 students surveyed, 170 categorized the school lunches provided by Sodexo as “okay,” “bad,” or “awful,” and only nine said they were “good.”

When analyzing the anonymous survey, interesting correlations came to light. Though not statistically provable, the more students packed their lunches, the better their grades were. The study also found that the students who classified themselves as “better off financially” packed lunches more often than the students who classified themselves as “worse off financially.”

One student said, “My last school, I would say we put probably more money, and had a bigger budget for lunch, so we definitely had better tasting lunches.” However another seven out the 15 students interviewed said they preferred YSHS’s school lunches.

Lohmeyer questioned the actual nutritional value of the government-funded lunches, which some students qualify for.

“All people, but especially young adults, should be eating things that aren’t processed or containing a lot of sugar,” she said.

Instead, youth should be eating foods that are “without the influence of hormones or antibiotics, or genetically modified,” Lohmeyer added.

Lohmeyer suggested a few ideas to help improve the school lunches: hire local chefs to prepare the food, buy local produce to cook with and put into the salad bar, or get the students involved with the preparation, like at the Greene County Career Center. Another option is for a longer lunch period during which students can go home or eat from local restaurants, Lohmeyer said.

There are challenges for a small school like YSHS to have a lunch program that serves good tasting meals that are also affordable. It’s is a problem for many different groups, including the students, lunch service providers, our teachers and administrators, and the community.

School Lunches around the world

As an exchange student, my time at Yellow Springs High School has made me realize how lunchtime varies from place to place, depending on the culture.

At my school back home in Senegal, we do not have a cafeteria, but there are little food shops near the school where we buy food to eat during lunch time. It is very cheap and delicious food, such as petit pois (peas in a spicy sauce) or tuna in a sauce (sometimes mixed with pasta). Students can get a meal for as little as 50 cents, which is probably why very few pack their lunches. Some Senegalese norms that we follow during lunchtime are not to waste food, and
not to eat in public outside of the school in front of those who cannot afford to
eat so well.

According to my research, in Japan, school mealtime brings a sense of communal duty. There is no cafeteria in the school because students eat meals in the classroom, where they serve one another. They all get the exact same meal, and are not allowed to bring food from home until they reach high school. Meals are not expensive, and reduced and free options are available for poorer families, much like in the U.S.

In France, the school cafeteria serves foods that are made from scratch daily in the kitchen. The food is never frozen or ready-made. During lunchtime, as the students enter the cafeteria, they sit down at tables of four that are already set and wait for other student volunteers to bring the first course, often a salad, to their table. The student who sits at the designated red chair is the only one who is allowed to get up to fetch more water in the pitchers, or extra food for the table. Then volunteers bring the main course platter to the table and the children serve themselves. A cheese course comes next, followed finally by the dessert, fresh fruit.

The social environment of the school lunchtime reflects the culture and norms of the society. What values is the YSHS lunchtime conveying?