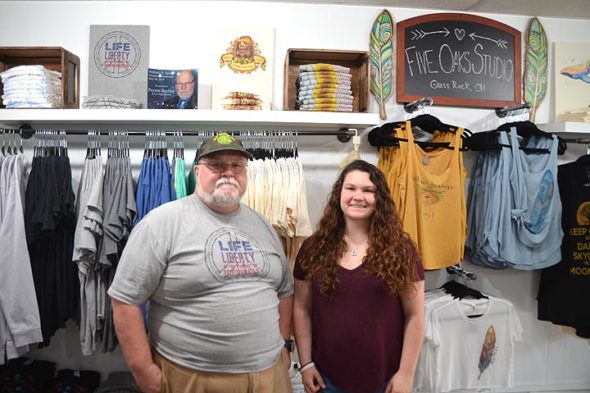 The father-daughter team of Mark and Morgan Heise opened the doors to Yellow Springer Tees & Promotions on June 3. Three weeks and one Street Fair later, the business is doing better than ever as a brick-and-mortar shop. (Photo by Reilly Dixon)

“If you can dream it, let us put it on a T-shirt for you,” said Mark Heise.

“The business is not limited to just T-shirts. We also create promotional items for businesses and individuals. In fact, two kids recently came in needing help finding a Father’s Day gift. They wanted ‘World’s Greatest Dad’ printed on a hat, so that’s exactly what we made for them,” Mark Heise said.

According to Morgan Heise, that kind of custom work geared towards the individual is a rarity in the printing and design industry.

“Larger companies typically have higher minimums for production. So, if you need just five shirts, you might have to purchase fifty — and that can be expensive,” she said.

But at Yellow Springer Tees & Promotions, customers can get just that single custom-made shirt or hat. 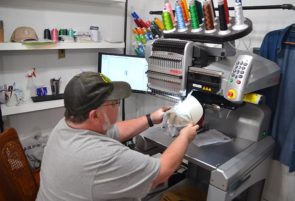 The Heises also fill orders on a much larger scale. Over the years, Mark has forged relationships with a number of adventure sports organizations and associations from near and far — many of whom have come to rely on Yellow Springer Tees for event materials and shirts. The Heises have made clothing for organizations such as Greene County Park and Trails, the Miami Valley Mountain Bike Association, the National Association of Professional River Anglers, the Society of Ohio Archivists, the Finger Lakes Trail Association (in New York) and the Five Rivers MetroParks, just to name a few.

Yellow Springer Tees & Promotions is also the official merchandiser for the Buckeye Trail Association. In addition to shirts and mugs with the association’s insignia, the Heises also produce water-proof maps of the trail. Stretching nearly 1,444 miles and intersecting Yellow Springs, the Buckeye Trail winds all around Ohio, making it the longest loop trail in the country.

The Heises come by their love for hiking and adventure sports honestly. A number of years ago, Mark Heise spent three years living on a sailboat, sailing from Galveston, Texas, to Salem, Mass., “chasing 75 degrees and hiding from hurricanes.” He said he had more than 7,500 miles under his keel before coming to and settling down in Ohio.

It was around 2015, when Mark Heise was volunteering as a videographer for the Five River Metro Parks, he first began making T-shirts on a more regular basis.

“I had a crew that used to help me go out and shoot videos of the parks,” he explained. “At the time, I wanted to make them some shirts — not just to thank them for their work, but also so they were easily identifiable for when we wandered places in the Metro Parks that the general public wasn’t normally allowed.”

He first considered using CafePress, a major online retailer for personalized T-shirts, bags, mugs and other materials, but he quickly found that the quality of shirts he wanted just wasn’t up to par.

“It was at that point I opted to do a little hands-on research of my own, and learn how to make those shirts myself,” he said.

So, he went out and bought a $20,000 direct-to-garment printer — which he jokingly referred to as his retirement fund.

“With a direct-to-garment printer, there are no setup costs, no overhead,” said Mark Heise. “Logistically speaking, it’s way more advantageous, in terms of production, than a screen printer.”

Things quickly took off from there. Mark Heise soon began making shirts for several other organizations and local outfits. He began selling online and at the Yellow Springs Street Fairs. His phone was ringing off the hook. Soon he was shipping orders all across the country.

By January 2019, the Heise’s basement had reached critical mass. In it were mountains of shirts, boxes of mugs and bottles, their hulking direct-to-garment printer, two heat presses, a sublimation printer, an embroidery machine, the printer that made water-proof maps and “who knows what else,” Mark Heise said.

That’s when Morgan Heise began working for the business. She left her time-demanding job as a pastry chef, and started helping her dad print and ship his orders. Her first major task was getting the basement organized.

“But in the end, she was unable to tame the space,” said Mark Heise. “We were still tripping over each other trying to do production.”

“I told my dad we needed to find a new space,” said Morgan Heise.

Opening a shop in Yellow Springs just made sense for the Heises. Mark and his wife, Robin, have lived in the village for fifteen years. Robin Heise founded Yellow Springs Heritage in 2011, and conducted walking tours throughout the village. Currently, she’s the county records manager and archivist. In the 70’s, Mark Heise’s uncle taught at Antioch.

After a couple months of moving their merchandise and machinery into their new storefront, Yellow Springer Tees & Promotions was ready for its new chapter.  On June 3, the Heises stood before a teeming crowd of friends, family, townspeople and business parters, and hoisted the classic giant scissors to cut the ribbon hanging in front of the store.

And with a quick snip, Yellow Springer Tees was open.

“It’s been so crazy, yet so satisfying, to see things come together the way they have,” said Morgan Heise. “Our new store is so much better than our basement. I love how the shirts look in here.”

Looking ahead, the Heises are optimistic about the future of Yellow Springer Tees & Promotions. They said they’re making more and more friends every day. They’re forging relationships with local artists, bands, non-profits and other small groups.

“After all, everyone needs a shirt,” said Mark Heise. “At the end of the day, I just want everyone to know that we’re here because we love this community. We’re here to serve the tourists and the locals.”

To learn more about Yellow Springer Tees & Promotions, or to browse their products, visit their website at http://www.yellowspringer.com or visit their shop in downtown Yellow Springs at 255 Xenia Ave.