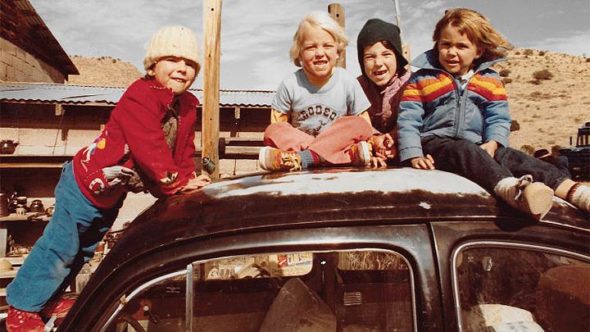 A film still from “Hippie Family Values,” showing children in the early days of the Ranch, an intentional community in New Mexico that is the focus of Bev Seckinger’s 2018 documentary, playing at the Little Art Theatre on Monday, July 29, at 6 p.m. The film was edited by villager Jim Klein. (Submitted Photo)

The year was 1976. Fifty people pitched in $1,200 each to purchase a former ranch in southwestern New Mexico. In the language of the age, they sought to go “back to the land” — to create an intentional community centered on consensus decision-making and stewardship of land and water.

More than 40 years later, that community, known as the Ranch, still exists. Over the years, members have come and gone. Children have been born on the Ranch, and those children have grown up to birth their own children within the community. Ranch members and their extended family have died there. Today, a multigenerational group of about 20 continues to make their home at the Ranch. Most members commute out for jobs, but find ways to remain deeply connected to the land and to each other.

And now a new documentary film that honors and evokes life at the Ranch, titled “Hippie Family Values,” is coming to the Little Art Theatre for one screening only, Monday, July 29, at 6 p.m. There will be a post-screening Q&A with the film’s director, Tucson, Ariz.-based filmmaker and film professor Bev Seckinger, and its editor, longtime villager and filmmaker Jim Klein. 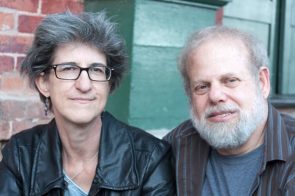 By phone this week, Seckinger explained that she first visited the Ranch in 2005 to play a gig there with her band, the Wayback Machine. She was already interested in intentional communities, but this particular one struck a chord.

“I found the place intriguing and beautiful,” she said. “The people were very interesting — the women especially were the engine of the place. They were, and are, role models to me.”

Three woman feature especially prominently in the film: Kate and Sally, members of the founding generation, and Sally’s daughter, Dulcie.

After her initial visit, Seckinger came back annually with her band, as well as returning on her own to shoot footage of the Ranch and interview its residents. As her visits and footage accrued — and her intimacy with the community members grew — a documentary film project took shape.

“It is really a love letter to the Ranch from me,” she said of the finished film.

Thirteen years in the making, “Hippie Family Values” premiered at the Santa Fe Film Festival in 2018. It has been shown at independent theaters, colleges and universities and other community-based venues around the country. The film spans the period from the Ranch’s 30th anniversary gathering in 2006 to its 40th celebration 10 years later. It also incorporates older footage from the community’s early days.

“Documentary filmmaking is more like cooking in the crock pot instead of the microwave,” Seckinger explained with a laugh. “It takes time to build relationships, trust and access.”

She worked closely with the film’s subjects on what material could and should be included, even down to the wording used in the film’s on-screen text. Her relationships with individuals at the Ranch have continued beyond the making of the film, according to Seckinger.

“In some ways, I feel like I’m part of the Ranch,” she said.

Editor Klein described the film’s intimacy as one of its strengths.

“It’s such an intimate portrait. Bev knew the people over a long period of time, and she really liked them,” he said by phone last week.

The intimacy of filmmaker and subjects is also reflected in the relationships between the subjects themselves, the Ranch’s members, Klein added. These human relationships are at the heart of the film’s story.

“The film is really grounded in the theme that trying to live in connection to people makes life more joyous,” he said.

Having been a member of a collective in Dayton for eight years in the 1970s and ’80s, Klein said he felt especially drawn to the film’s subject and themes.

Yet “Hippie Family Values” doesn’t sugar-coat the real challenges involved in communal life. For example, one of the Ranch’s younger members expresses frustration with the slow pace of communal decision-making, while an older member laments that the community has left behind the “very cooperative” spirit of its early years. While Ranch members initially shared communal meals, the community moved away from that arrangement over time, with the common kitchen now reserved for special occasions.

Still, the Ranch continues to hold communal meetings; the film shows members being summoned together by a blast from a conch shell.

“There is a degree of intentionality and thoughtfulness there. I really admire that,” Seckinger said.

One of her motivations in making the film was “stereotype busting,” she added. Born a little too late to be a hippie herself, she said she has long looked up to her hippie elders, activists and idealists 10 to 20 years older than she.

“There are all these disparaging stereotypes of hippies as lazy and shiftless. But no one could be more industrious than Kate,” Seckinger reflected, referring to a long-term member of the Ranch who is a successful potter. “These are people working really hard to create alternatives to [mainstream] living arrangements, health care, food and our relationship to the environment,” she added.

While many communes that started in the 1960s and ’70s folded long ago, the Ranch has changed but endured. Close bonds among members and a healthy balance between individual freedom and communal responsibility may be factors in the Ranch’s longevity, Seckinger speculated.

Although the film explores a long-term experiment in alternative living, it illuminates the life experiences and rites of passage common to people everywhere, she believes.

“It ended up being, at its core, about the phases of life, about the complexities of relationships and aging and death,” she said. “I think people respond on a visceral level to that.”

Klein, too, underscored the appeal of the film’s broader themes.

“It’s hopeful material. They’re finding ways to be in the latter parts of life with pleasure and meaning,” he said of older Ranch members. “Having just turned 70, it feels very close to my heart.”

Klein and Seckinger collaborated for two years to edit footage from a decade of intermittent shooting into a cohesive film.

“We worked as a team to find the film’s story. As an editor, I play a strong role,” Klein said.

He got his start in filmmaking at Antioch College, where he and his then-partner Julia Reichert created the film “Growing Up Female,” widely considered the first film of the modern women’s movement. They also formed a distribution company, New Day Films, now a flourishing filmmaker-run distributor for socially conscious documentary films. It was through New Day that Klein became friends with Seckinger; New Day distributed her 2004 film, “Laramie Inside Out,” about the aftermath of the murder of gay youth Matthew Shepard in Laramie, Wyo., Seckinger’s hometown.

Klein has previously produced seven independent feature films, as well as serving as post-production editor for many more. He’s garnered two Academy Award nominations for his documentaries, which in addition to “Growing Up Female,” include “Letter to the Next Generation,” a film exploring apathy versus activism at Kent State at the dawn of the Reagan era.

“I loved the film. He’d thought through deeply” the issues of whether and how counter-culture values could survive, she said.

“I didn’t know someone of Jim’s stature would work with me,” she added.

The pair clicked from the start, according to Seckinger.

“As soon as we got started, it was obvious we shared totally the same sensibility,” she said. “I learned tons from working with him.”

By mutual decision, “Hippie Family Values” relies on the voices of Ranch residents, with minimal exposition from the filmmaker. Voice, music and image, rather than tight narrative, propel the film, according to Klein.

“We were thinking about, ‘How can we make this place come alive for the audience?’” he explained.

After short stints collaborating in both Tucson and Yellow Springs, Seckinger came to the village during the summer of 2016 for two months of focused editing.

“I had already fallen in love with Yellow Springs” on previous visits, she said. “It was the perfect place for cutting this film.”

She wove herself into village life, harvesting garlic at the Antioch Farm, riding a borrowed bike on the bike path and enjoying wine and meals at the Winds and Sunrise Café, all while staying at Klein’s home. The communal feeling in Yellow Springs reflected and reinforced the film’s atmosphere, she observed.

“There was just so much resonance” between Yellow Springs and the ethos of the Ranch, she said.

“We were living the life of the film every day in making it,” Klein recalled. “There  was no disconnect.”

Seckinger said she is looking forward to coming back to Yellow Springs for the July 29 screening at the Little Art. A rough cut of the film was screened in 2016 in Klein’s living room, with feedback from friends, family and fellow locally based filmmakers.

“I’m just super-excited for this film to be shown here,” Seckinger said. “In a way, this community helped make it.”