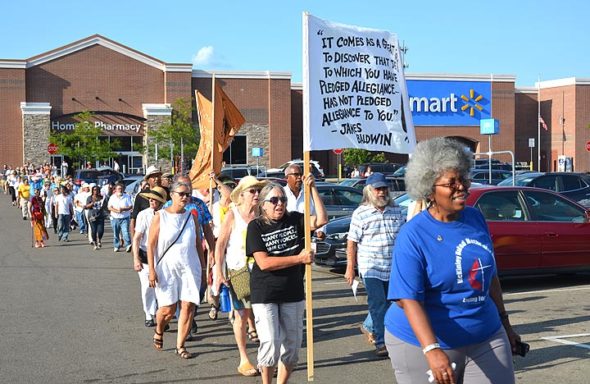 On a hot Monday evening, at least 100 people gathered outside the Beavercreek Walmart for a memorial on the fifth anniversary of John Crawford III’s shooting death at the store. The event was organized by villager Yolanda Simpson. While police were not indicted for the killing, a civil trial related to the incident is due to start in Dayton, on Oct. 28. (Photo by Audrey Hackett)

John Crawford III is not forgotten.

That was the main message Monday evening at a memorial along Pentagon Boulevard, outside the Walmart where Crawford, a 22-year-old black man from Fairfield, Ohio, was shot and killed by a white Beavercreek police officer five years ago.

Organized by villager Yolanda Simpson, the memorial drew at least 100 people, including many from Yellow Springs.

The mass shooting in Dayton early Sunday didn’t appear to reduce turnout, and may have strengthened the mood of quiet determination evident at the event.

“This is yet another tragedy in a long list,” participant Lynda Hardman observed prior to the event. “I’m here to stand in honor of him, and all the other young people’s lives.”

Held under a blazing evening sun, Monday’s memorial opened with a 10-minute silent vigil. People stood shoulder to shoulder in a line that stretched along the roadside most of the way from one mall entrance to another. Some held hands. Some closed their eyes.

“When you stand there, I want you to come up with solutions so that we don’t have to keep memorializing unarmed black people,” Simpson coached the crowd prior to the vigil.

Crawford was killed in the pet food aisle of Walmart on the afternoon of Aug. 5, 2014. He was on his way to a barbecue. In the minutes before his death, he was talking on his phone to the mother of his children and distractedly handling an air rifle/pellet gun he’d picked up from the store’s shelves. Another shopper called 911, reporting that a black man with a gun was threatening customers. Responding to that single 911 report, Beavercreek police entered Walmart and shot Crawford twice within seconds of encountering him. They subsequently said they believed they were dealing with an active shooter. The store’s video surveillance footage shows that the 911 caller’s description of Crawford’s movements, including the claim that he was pointing a gun at a mother and her children, was false.

A Greene County special grand jury declined to indict the officers involved in Crawford’s death. A Department of Justice investigation, concluded in July 2017, also cleared Beavercreek police of wrongdoing. Now a civil case brought by Crawford’s family against the officer who killed Crawford, Beavercreek Police, the city of Beavercreek and Walmart is pending. The case, after multiple delays, is scheduled to go to trial in federal court in Dayton, beginning Oct. 28. The family is seeking damages on a variety of state and federal claims.

Both the circumstances of Crawford’s death and the fact that it was part of a string of police shootings of unarmed black people make this case particularly troubling to some local people. (The pellet gun Crawford picked up is a kind of hunting rifle, available on Walmart shelves and not sold as a firearm.) Many at Monday’s memorial voiced frustration and outrage that justice — five years later — has not been served.

“It’s not just losing a child, but watching the process of justice be sabotaged,” Yellow Springs activist Bomani Moyenda observed during his remarks at the event.

The crowd was still standing silently when Crawford’s father, John Crawford Jr., arrived, up from his home in Tennessee. Crawford moved down the line, hugging person after person, shaking hands, thanking them for being there.

Then the crowd about-faced and began crossing the mall parking lot, turning to walk in front the Walmart where the younger Crawford was killed. Some were singing. The lyrics reflected the mood: composed and resolute.

“You gotta put one foot in front of the other. And lead with love.”

“We shall not give up the fight, we have only started.”

Heading the march were Moyenda and Crawford’s father, deep in conversation. Crawford’s mother, Tressa Sherrod, also took part, walking quietly in the middle of the group. Both parents have come back to Beavercreek at least three times at the anniversary of their son’s death for the annual local commemoration.

Organizer Simpson said in an interview prior to the event that as long as she has the blessing from Crawford’s family to continue the remembrance, she will.

“I want them to know that his name is not forgotten. We will never forget his name,” she said.

That sentiment was a refrain of the evening.

Having passed Walmart, the walkers and singers turned again, heading back to the sidewalk along Pentagon Boulevard to listen to the reflections of several speakers. Moyenda opened with a chant, repeated a few times.

He referenced the delays in the family’s civil case.

“The system wants to drag it out, so eventually, you go home,” he asserted.

Such delays and the lack of indictments of the officers involved imply that Crawford’s life “doesn’t matter,” he added.

“We fly in the face of that,” he said to and of the clapping crowd.

Moyenda urged those gathered to attend the upcoming trial at the U.S. District Court’s Southern District of Ohio courthouse in Dayton.

Sabrina Jordan, of Ohio Families Unite Against Police Brutality, also spoke. She, too, had lost a son to a police shooting, she said.

She called for police accountability, transparency and a focus on de-escalation in tense events. And she underscored the power of people taking notice and speaking up when brutality occurs.

“We are powerful in numbers. They need to be scared,” she said.

She also urged the civic necessity of voting and staying informed.

“It shouldn’t be in your DNA to quit,” he told the crowd.

And he advised a combination of love and force, saying, “You can’t lose with love,” as well as quoting Malcolm X regarding doing “whatever it takes to get justice.”

In reference to his own past involvement with police, which include charges related to incidents in Yellow Springs, Talis X spoke about being abused by the criminal justice system and emerging stronger.

And then it was time for Crawford’s father to take the megaphone.

He opened with determination and cautious optimism about the family’s civil suit, despite delays.

“We have to endure,” he said. Later on, he added, “We’re still holding on for the October date.”

He also referenced the video surveillance footage, which has been at the heart of outrage over Crawford’s death. To most viewers, the footage unquestionably contradicts the 911 report.

“There’s no subjectivity in the footage,” Crawford asserted.

He spoke about the “flat, unadulterated racism” that he believes was a factor in his son’s death and in the exoneration of those who caused it.

“That’s our fight — the fight with racism,” he said. “We can’t get the same justice.”

Air rifles are picked up by Walmart customers all the time, he said. The one his son carried down the aisle was out of its packaging, and reportedly had been for a couple days.

“Why, when he picks it up — all hell breaks loose?” he asked.

Race was blatantly a factor, according to Crawford.

Nothing can bring his son back, he acknowledged, but the legal system needs to “right the wrong and move on,” he said.

“My son is gone — he’s in the ground,” Crawford said, with strong emotion. “We need some type of justice.”

And he expressed gratitude to those assembled for the memorial, noting that the crowd had grown from last year.

“Justice delayed is only justice denied if we quit,” she said.

“We’ll be here every August 5,” she affirmed.

Then butterflies were released, and the crowd slowly dispersed.

In a brief interview just after the event, Crawford expanded on earlier references to Walmart’s role in the family’s law suit.

He noted that the family has sought an apology from the company for their son’s death, but has yet to receive one. And he expressed frustration that Walmart lawyers were blaming the 911 caller, Ronald Ritchie, for Crawford’s death.

“They’re all culpable,” he said of Walmart, the Beavercreek Police and the city of Beavercreek.

A previous citizen effort, led by Moyenda and others, to bring charges against Ritchie for making false statements on the 911 call ended when the special prosecuting attorney said there was no reason to believe that Ritchie had made a false report.

Moyenda wrote about Walmart’s position on Ritchie in a column in the Aug. 1 issue of the News.

Court records from February and April 2019 accessed by the News online show that Walmart plans to argue that Ritchie was the “legal and proximate cause” of Crawford’s death. The plaintiffs have sought to limit this line of argumentation, but the court is allowing it, the records show.

Moyenda, who has been a major local organizer of protests and actions related to the Crawford case, said that he was balancing two very different mindsets at the milestone of the fifth anniversary of Crawford’s shooting.

“We’re here to honor his life and support his family,” Moyenda said of Monday’s event. “At the same time, a horrible injustice has taken place.”

But supporting Crawford’s family was paramount, especially in the lead-up to the trial.

“We’re in their corner, we got their back,” he said. “We want them to know that.”