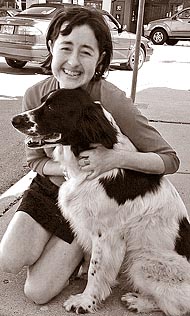 Lauren Bales Heaton was born on June 21, 1975. She was a lifelong resident of Yellow Springs. She graduated from Yellow Springs High School in 1993 and received a Bachelor of Arts degree from Carleton College in Minnesota in 1998, after completing a year abroad in Cameroon and France.

She battled with leukemia from 1996 to 2002, during which time she received a bone marrow transplant. A combination of traditional and holistic medicine saved her life, but the chemotherapy and radiation left her heart compromised.

She worked at the Yellow Springs News for 15 years as a reporter and associate editor.

Lauren and Kirk Weigand were married on May 27, 2006 and moved into a straw bale house they helped construct in February 2012.

Lauren received a heart transplant on July 5, but passed away July 28, 2019, due to complications from her transplant.

She is survived by her husband, Kirk; stepchildren, Anne, Robbie, Liam and Marya Weigand; her parents, Kazuko and Tim Heaton; sister and brother-in-law, Erika and Matt Grushon; and nephew and niece, Isaac and Vivian Grushon.

Many will miss her kind and genuine presence. She was and will continue to be a friendly spirit to all who knew her.

Lauren was a friend of the Bahá’í Community, member of the YS Oddfellows Lodge and a cellist in the YS Community Orchestra. She is pictured with her and Kirk’s beloved dog, Tucker, who was known to the community as “The News Hound.”

A memorial service to celebrate Lauren’s life will be at The Glen Helen Building Saturday, Aug. 24, 10 a.m.–noon. In lieu of flowers, donations may be made to Chamber Music in Yellow Springs in Lauren’s honor.