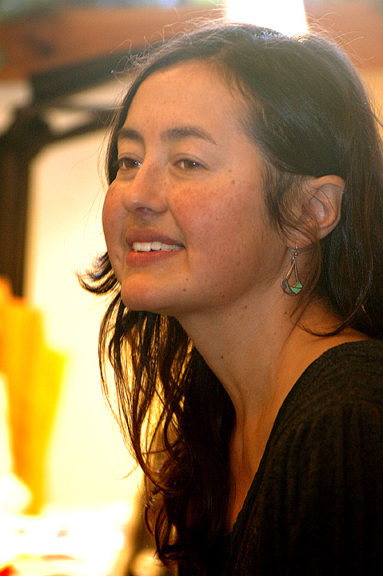 Heaton was an award-winning reporter, columnist and photographer, as well as associate editor, at the paper for 15 years. At the News, Heaton’s curiosity and perspective as a native Yellow Springer intersected with her gift for writing.

Heaton’s association with the News goes back to her youth, when she was a paper carrier. She returned as a reporter in her early 20s in 2000 for Editor Robert Mihalek and went on to work closely as associate editor with subsequent Editor Diane Chiddister, until Heaton left the paper in 2015.

In addition to reporting and editing, Heaton wrote two columns during her  News career — “Pen and Squid Ink,” an exploration of her love of food and cooking, and “Middle Ground,” which showcased her characteristically fair-minded take on local politics and community issues.

Heaton distinguished herself as a serious journalist with a healthy skepticism, tempered with a great sense of humor. Her discipline in striving for equanimity was a model to those with whom she worked. Above all, Heaton’s work was motivated by a her love for her hometown and a desire to see her community thrive.

Heaton’s skills in news-gathering and writing allowed her to produce a wide range of articles — from complex, data-driven investigations to lighthearted features that captured the spirit of those she interviewed. She cultivated strong relationships with sources and gained the respect of many in the community during her tenure.

Most recently, her “Middle Ground” column took first place in the category of original columns in 2015. According to the judge, “Lauren Heaton’s columns are a great example of the critical role a local journalist plays in the news ecosystem.” In a 2014 second place showing in the same category, a judge commented, “Opinions are thoughtful without being judgmental or ‘holier than thou.’”

Heaton won several awards for feature writing. Her 2011 article “Curating Legacy of American Writer” won first place in the Features category. The story, which focused on villager Arnold Adoff’s work to curate the work of his late wife, author Virginia Hamilton, “establishes the historical significance and legacy of Hamilton” in a way that “had an unusually wide range and depth,” a judge wrote.

Heaton also won awards for photography; she was uniquely skilled at capturing poignant moments and framing shots from interesting angles.

As a member of the News editorial team, she was also honored for her writing as part of several in-depth series, including those on the 2008 closure of Antioch College,  local policing, water, health, and more, along with numerous editions of the Guide to Yellow Springs.

At the News, Heaton will be remembered for her love of fine cheese; her devotion to her dog, the late “News hound,” Tucker, her sparring “devil’s advocate” positions, and her graceful, joyful dancing at weekly impromptu staff dance parties celebrating the completion of yet another issue. Through our archives, Heaton will continue to tell the community’s stories.